The Ping River winds its way down from Doi Chiang Dao, Chiang Mai Province through Lamphun, Tak, Kamphaeng Phet and finally Nakhon Sawan where it flows into the Chao Phraya River. A journey of over 550 kilometres and one of many stories. I would like to add one more.

Tak City in the north-west of Thailand was an ex logging trading post many years before. Located on the banks of the Ping River, Tak gives out a feel of quiet secluded comfort set against a background of flowing rapid waters.

All photographs in this post are used for illustration purposes only.

A one-horse town is a place where very little happens, and at first glance, Tak appeared just that. Tak’s horse looked lame and staring down both barrels of a shotgun. At times in life you judge things wrong, be it a person, incident or in this case a location. I was wrong. Tak’s horse rose to its feet and ran like the wind. And I’m sure it’s still running today.

The Viang Tak 2 Hotel sits looking quite proud of itself on the banks of the Ping River.

I woke around eight in the morning, quite late for me, and without birds singing or the smell of fried bacon dancing over my senses. I had woken after my fourth night at the hotel suffering from my fifth hangover, that’s how it felt. The length of my tongue tasted like the inside of a skunk’s colostomy bag.

I was suffering dehydration with a sun-bleached capital D. The only water my body had swallowed in the previous four days had been on the end of a toothbrush. After two cigarettes, I headed straight for the bathroom before my teeth crawled out and bit me.

Hotel reception was busy. People stood talking in groups of threes and fours. I noticed a few policemen sat at a table drinking coffee and eyeing the mixed crowd. Handing in my room key, I was greeted by Team Thai, four beautiful and immaculately groomed receptionists. I grinned, then set off for breakfast.

The hotel had a complex and not a bad one at that, aside from the restaurant and bar, it housed a nightclub, karaoke bar, massage parlour, snooker hall, and a few other bits and pieces. At the nightclub, my wallet was a magnet to some of the girls and my whisky and cigarettes, legalized mugging for the boys. The karaoke bar cleared the wax from my ears, and the massage parlour was like the snooker hall, you potted your pink.

Breakfast, was my usual eggs and toast, with those horrid hot dog sausages quartered at both ends. Finished, I set off to the swimming pool area. The day before I had relaxed by the pool, drinking, smoking and watching two local female synchronized swimmers going through a training routine. It was a delightful afternoon, and I was hoping they would return later that day. I intended being there.

I finished my last couple of cigarettes lent on the pool area wall overlooking the Ping River, a magnificent view. I needed to buy cigarettes, so I decided to take a stroll down the main high street and have a look around.

I left the hotel by the main lobby doors which faced the high street. The sun was hot and beating down even at this mid-morning hour. Crowds were starting to line the high street outside. I guessed a procession or carnival of some kind that would arrive soon. The main street was a blast of small unit shops with pull-down roller shutters and housing above. I’d looked around the shops every morning, day time there seemed little else to do.

The shop owners sales pitch appeared to be cramming as many goods inside the shop as possible and leaving the aisles as narrow as can be done. A 360-degree turn in a glassware shop would end with a massive bill. Security was non-existent, the shopkeepers seemed half asleep, some totally asleep, and in some cases possibly dead. It would be at least 50 years before anyone slid a CCTV brochure under a Tak roller shutter door.

I spotted a small cigarette kiosk in one of the shops directly opposite the hotel and started to walk over. There were policemen stationed every 50 metres or so on both sides of the high street, and one inside the cigarette shop. The shopkeeper and the police officer both greeted me. I returned their polite welcome. The small cigarette showcase was balanced on a table which doubled as the checkout. Next to the cigarettes was a bottle of lao khao (rice whiskey). Lao khao is usually drunk from a small glass tumbler and swallowed in one hit.

Behind the checkout was a small round table with seating for half a dozen people. In the middle of the table sat two glass tumblers and a bottle of lao khao. As I paid for my cigarettes, the policeman raised a glass of lao khao and knocked it back in one. He asked the shopkeeper for one more and motioned for me to join him for a drink.

The Party Six were a mass of boyish grins embedded 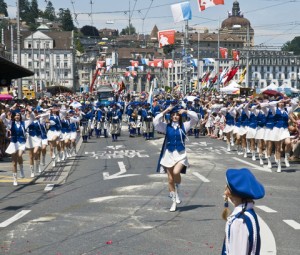 on old wrinkled, weather-beaten faces as I raised my glass and swallowed the lao khao in one hit. It was a reminder of how awful it tastes.

The police officer, fascinated by this farang drinking the local firewater laughed out loud, downed his drink in one and gave me a grin that’s usually matched with a 200 baht traffic fine.

The sound of loud music broke the policeman’s laughter. Further down the high street, a marching band and school majorettes were heading a carnival procession. They were coming our way.

I decided it best to return the policeman’s kind offer of a drink.

By the time the head of the carnival procession had reached the cigarette shop the party six had swelled to eight and the hosts were a half-cut policeman and a chain-smoking asthmatic westerner. And the noise of the drum roll was getting louder.

The marching band and school majorettes with drums and musical instruments stretched back down the high street and out of sight. I figured on it taking at least half of an hour for the carnival to pass by the shop and did not want to appear rude to the lao khao-ers by returning to the hotel. I ordered one more bottle of lao khao and a few bottles of beer. The drum roll was now real loud.

By now, the Party Eight had become loud and not so proud of their behaviour. The majorettes straight ahead smiles had started to shift toward the cigarette shop where the Party Eight had morphed into an Octet of Gremlins. And the laughing policeman had degenerated into a drunken mess, and I was feeling half-cut and getting very concerned.

At the back of the shop, the worried-looking shopkeeper babbled into his mobile phone in rapid Thai. The majorettes smiles had slipped to giggles, and their eyes were fixed firmly left on the noisy shopkeeper’s party. Luckily for the majorettes, the Ping River turned left just after the hotel, but if it hadn’t, I am sure they would have marched straight into the river. I imagined what the next day’s Bangkok Post bold print headlines might say.

Talk your way out of that one. The drum roll had become deafening. 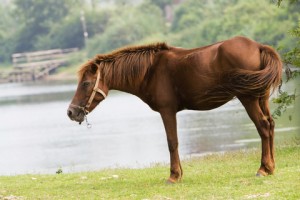 The next event happened very quickly; that quick, I’m not even sure I saw it happen. All of a sudden, the policeman took off his brown uniform jacket and shirt, unholstered his gun and was stood bare-skinned from the waist up waving the gun in the air with a mad grin on his face. The shopkeeper grabbed his mobile and shot to the back of the shop. I took a step back and changed my Bangkok Post headlines to Farang Shot Dead in Tak.

The majorettes stopped giggling and slightly lengthened their stride.

A few minutes of madness passed, and then all of a sudden, a woman appeared at the front of the shop. She spoke angrily to the policeman who I assumed to be her husband. The lady reholstered the gun, grabbed his clothing and with the aid of the shopkeeper, hauled him off to a waiting car. The policeman hadn’t spoken one word.

I swear, when the car pulled away I could see a bushy proud tail pointing skywards from the boot, and shiny muscular hind legs digging deep into green turf sending large lush divots spiralling into the River Ping.