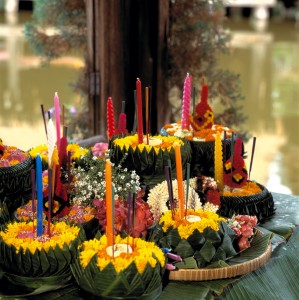 is primed ready for the next harvest and the Thai nation gets ready to embrace their annual Loy Krathong Festival, the Festival Of Lights. The night of the 12th lunar calendar full moon falling in November is the  when Thais pay tribute to the Goddess of Water and ask forgiveness for polluting the waterways over the previous 12 months.

Opinions on the origins of Thailand’s Loy Krathong Festival vary with one of the most documented stories dating back some 700 years to the Sukhothai period. The story goes that each year at the end of the rice planting season on the night of the 12th lunar full moon, the King of Sukhothai held a water festival at which many people would float lit candles and lanterns on the water.

One year the beautiful and artistically talented Nang Noppamas made a krathong (a vessel made of banana leaves) adorned with flowers and candles, which she lit and released from the waters edge during a floating lantern contest. The King was so impressed with its beauty and significance he decreed that each year on the night of the water festival, lighted krathongs should be floated on the rivers and canals of the Kingdom.

For many Thai people Loy Krathong is the favourite of all their festivals and it has become a popular attraction for foreign visitors too, heralding November as the start of the peak tourist season. The 2008 festival takes place on the night of the full moon on November 12th. 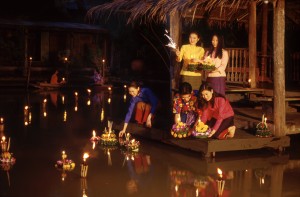 Early morning on festival day all around Thailand its townsfolk and  villagers will go to Buddhist temples to make merit to the monks with an offer of food and then to listen to the monks chant sermons.

Volunteers will go to debris strewn waterways and clear the clutter and waste in preparation for the big night ahead. In the afternoon families and friends make krathongs or alterations to their previous day’s creation.

A traditional krathong can be made using the soft inner core of a  banana tree as a base to which banana leaves are pinned with  toothpicks forming a lotus flower shaped boat. The krathong is then adorned with flowers, three incense sticks, candles and small coins.

In the early evening hours locals set off to the rivers, ponds and canals, carrying their krathongs for a night of celebration, music and spectacle. Many houses, temples and bridges will be decorated by strings of bright coloured lights as Thailand celebrates Loy Krathong with a full moon carnival. A typical evening’s celebrations involves music, dancing, krathong contests and Nang Noppamas Beauty Pageants. The night skies are lit up with fireworks and hot-air lanterns which form a picturesque background for the flickering flames of the krathongs floating over the waters.

The pinnacle of the festival evening is the floating of krathongs at the waters edge. The incense sticks and candles are first lit and after making a wish for the coming 12 months, the krathong is released into the water. It is believed that the offering of the krathong to the water will wash away the sins and bad luck of the previous year and bring good luck in the future.

I hope you have a very enjoyable Loy Krathong 2008 and if you are travelling, have a safe journey.