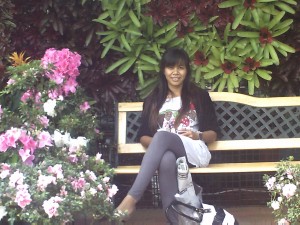 We had coffee together early morning and went over our plans for the day. I knew Wonderful Wi wanted to go to the Phu Rua Flower Festival again, she hadn’t mentioned it, I just knew. I put it to her, we’ll go to the Turkey Farm and from there Phu Rua. They probably heard her whoop whooping in Bangkok, she was delighted. Okay so here we go, lets get it over with and then forget it….Game set and match to Miss Wilai….Miss Wilai wins by three sets to love (confused..see previous blog).

In the Loei brochure it said about the Turkey farm and I quote ” The farm is at Ban Ko Rai Yai , Tambon Sieo. The farm’s motto is ” Think of Turkeys. Think of Loei.” The farm has thousands of turkeys for viewing and visitors are welcome during 08-30 – 12-00 am. daily.”

The gates were locked with a bloody big padlock. Wi then drove right up to the gates, they remained locked and the padlock looked bigger, you do some strange things in life. We decided we would go on to Phu Rua and try again on our way back to Muang Loei and the Sun Palace Hotel. 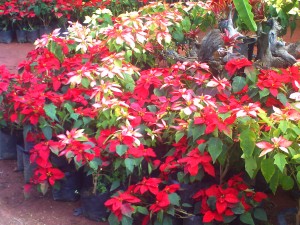 The Flower Festival followed the same pattern as the previous day, Italian football, slowly build it up at the back and then through the middle. There was a two lane highway separating us from the festival with a grass bank leading up to it. In true Serie A style we slowly filled up the boot, next, play it through the middle.

We filled up the backseat with more shrubbery and then the floorspace, job done it was time for my first daytime drink of our three day break. Amazingly Wi then set off again, crossing the highway and climbing the grass bank. She disappeared into the flower festival.

Sat at a table outside of a shop drinking beer I analized my dilemma….there’s only the driver and passenger seats left, no roof rack and she’s vanished over the bloody grass mound again. I frantically tried to recall the Thai words for bus station and hurriedly rehearsed my plea “don’t leave me alone, I’m only 49 and with only 8000 baht in my wallet, put the flowers down and take me with you.”

Twenty minutes or so later she surfaced on top of the grass bank and in what seemed slow motion headed for the car. This was crunch time and thank you Buddha, she opened the passenger side door and somehow found a gap to slot them home, the final whistle had blown. As she headed over to me I was overwhelmed with a feeling of how could a football nut like me get it so wrong.

It wasn’t Italian football at all, pure English International football, World Cup style. The flowers were solid at the back, a packed midfield with no room for movement and two up front, little and large. Wilai, what a masterstroke.

Our car pulled up at the turkey farm, the gates were still locked, we got out the car and Wi went through a gap in the adjoining bamboo fence. I somehow got through, like an ageing arthritic limbo dancer from a country with a cortisone shortage. In true Enid Blyton’s Secret Seven style, we were going to check out the farm, most un-Thai like. We had walked about 300 metres along a dirt track, there was sparse woodland on either side, no sign of turkeys. Wi suddenly stopped and said to me ” hus…band maybe here have dog, me scare.” My reply followed a line similar to this “If there are dogs I think they’ve eaten all the turkeys.” Not a feather anywhere and surely you’d hear a few thousand turkeys, they ain’t exactly quiet except on Christmas Day.

Wi spotted a farm worker up ahead, maintaining the woodland. A friendly rapid fire Thai conversation took place and then the farm hand ushered us over to a large wire meshed pen. It was overgrown with bushes but had a trampled down area right in front of us. Great, turkeys at last. The farm hand walked off, hacked away at a tree and returned with a large leafy branch which he threw over the fence, Wi then explained the state of play. The farmer had sold all his turkeys and set up a new farm elsewhere. Bloody Bernard Matthews I bet it was him. Bernard I’m going to stuff you when I get back home.

After a strange set of noises made by the farm hand there was a rustle in the bushes and slowy, nervously and with tiny timid hestitant steps they came forward. 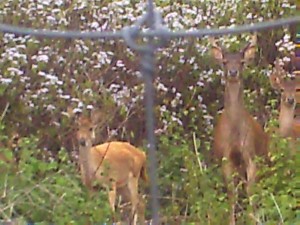 We returned to the hotel with Wi complaining of coming down with a fever, she reckoned it was a cold or flu. My guess was Green Fly and the sneezing room maid had hay fever. I carried our latest collection of O zone stabilizers up to the balcony and then headed for the hotel bar and a few beers. Relaxation in a pollen free environment, lovely.

The evening was spent at a night market, a good place to sober up. When you keep bumping into people it eventually brings you to your senses. For most of our time we went back and forth to a woman selling puppy dogs, Wi eventually decided that Udon would be a better place to buy one.

Time to eat and the Charcoal Restaurant was Wi’s choice once again, Wi then went off to bed and I hit the hotel bar. A chance for me to be alone for a few hours with my beer and cigarettes, a chance to think and unwind. I do like that.

in the morning we had a three hour drive home and we planned to set off about nine. Usually on a trip like this I like the classic English style boiled sweets to somehow make the journey a little less tedious. this time I’ve bought some slug pellets, they seem more appropriate and health conscious. I’ll let you know what they taste like. Have a low pollen count day and stay your way. Hoo Don.