Mad Mick And The Magic Roundabout 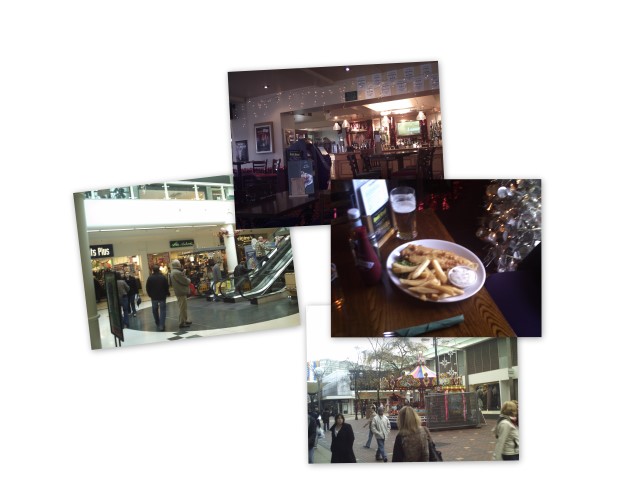 I have put another scrambled collage at the top of this post courtesy of Picaso 3, I think they look rather neat especially when you take into account my camera has about as much prowess as a skinny rabbit sat in a bath tub full of gay rugby players. Soon I gotta spread my wings and fly so today it was off to my local shopping centre in Swindon and a look around for a few holiday necessities and pick up a couple of presents for Wonderful Wi.

Swindon the industrial boom town of the late 70’s and 80’s set in rural Wiltshire and for many years before one of Britain’s biggest railway towns. Famous for their 1969 Football League Cup victory over Arsenal and host to the Magic Roundabout, possibly the most confusing roundabout in Britain for any first time motorist to this quiet town. Birthplace to Diana Dors, Gilbert O’Sullivan, Melinda Messenger and the very camp, I’m sure I’ve met you before, wasn’t it in Thailand, Julian Clary.

Home to Honda and BMW Mini who are both currently shedding staff faster than a Christmas tree loses its needles. Modern day Swindon is now more of an Insurance and Financial hub and has seen a massive influx of foreign workers descend on its numerous Work Agencies, devouring what industrial work there still is. The history of Swindon could be put on the back of a matchbox and read without glasses but if you want a more in depth history then click on this slightly larger matchbox. 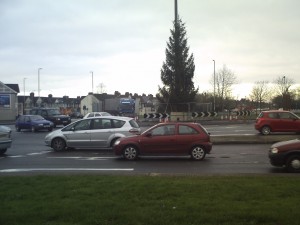 A stroll into town passed me by the Magic Roundabout the famed maze of roundabouts that somehow converge into one. A Swindonians wake up call, a first time callers ultimate stick or twist and a carousel that has left many a cyclist flat on their back, bicycle horizontal with both wheels spinning. Sadly over the years some people have not lived to tackle the carousel of fate ever again.

The tree in the middle doesn’t depict that this third party fire and theft no go zone was sculpted from woodland, it’s Swindon’s second attempt at their festive focal point. The first Christmas tree arrived taller than ordered and the support structures were inadequate, the mark II is surely a distraction that historical evidence cleary shows is an accident waiting to happen. If your weekends are spent ab-sailing, paragliding or just plain old riding the wall of death, try a first time trip over the Magic Roundabout, the carousel of fate will await your guile, nerve and occasional swerve. 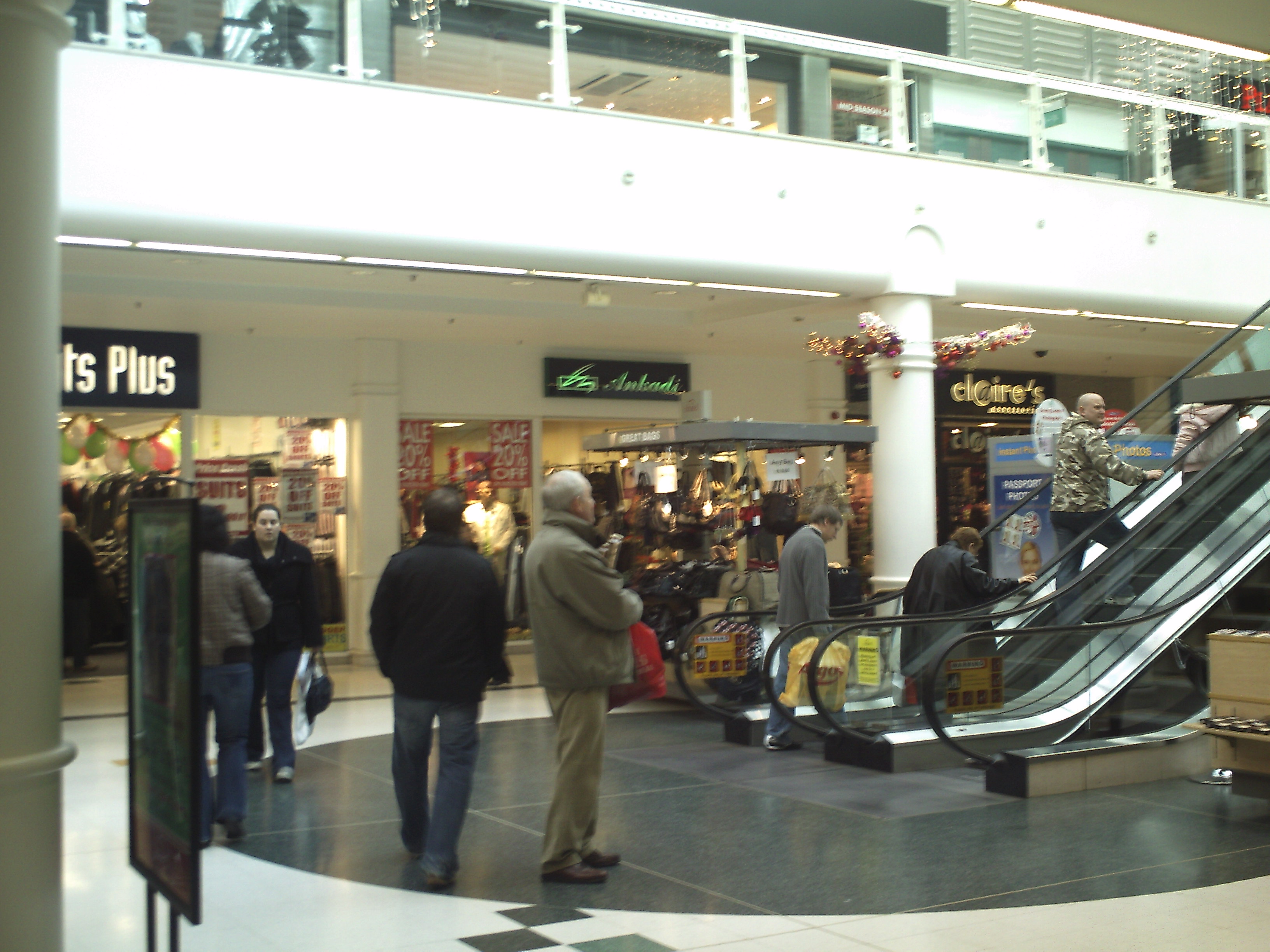 Christmas shopping Great Britain 2008. My photograph doesn’t show how busy the town centre was, a lack of faith with my camera made me wait for a quieter moment. The mass of frantic shoppers converging from every direction, like two giant armies in the heat of battle. Unsmiling faces trying to feed the greed that is the youth of Britain today. The want, want, want for today’s latest high tech appliance that is tomorrows discarded gadget and the lust for the latest fashion that is next years e bay sale. A far cry from the charismatic smiles that are worn by the Thai’s in the shopping malls of Thailand, where hard earned money is spent wisely and not just on themselves but for a grandmother, sister, aunt or even the school teacher who has always taught with a smile. Christmas shopping British style, a solemn faced, machine like, almost robotic stomp from shop to shop with every credit card purchase biting as deep as the cold winter wind. God bless the Internet, I’d pre checked the availability of what I needed and in no time I was on my way, carrier bags in hand to mans favourite friend, the pub. 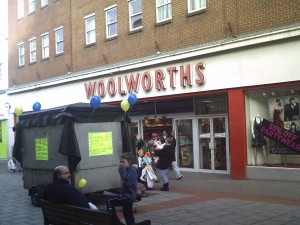 I don’t know if I voluntarily walked in or whether the sentiment and apathy that is currently engulfing one of the standard bearers of past Britain, Woolworths, sucked me in for a possible last look at a great shopping store of yesteryear. The emblazoned windows shouted at you “Liquidation Sale, 50% Off,” I struggled to see much over 10% off in a very busy store, where half of the punters seemed to be in a frenzied search for the missing 40%.

With nobody having twisted my arm I somehow walked out having paid just over £10 for a Best of Westlife CD, another present for Wi. My mind drifted forward to Christmas Day and the possible new addition of a puppy dog to our village house. My mind quite clearly saw the puppy messing on the living room tiles to the tones of Westlife singing “Flying Without Wings,” and Mama almost Beckham like launching the young pup into the next village. 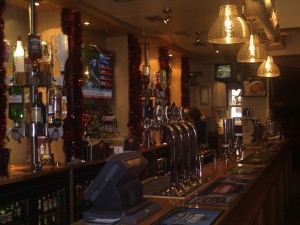 The Merlin Pub my last port of call. Mad Mick was there as usual, knocking back the Coca Cola. For those of you who don’t know Mad Mick, he is the oldest punk rocker in town. His receding, thinning hair is spiked up with more soap than you would find in a 5 star hotel bathroom. He resembles a Johnny Rotten jigsaw put together wearing boxing gloves and a blindfold, you either love him or hate him and I jumped off the fence a long time back, I always give Mick a warm welcome. At six foot plus and on some serious medication Mad Mick cuts a striking figure. Most conversations with the giant punk start off meaningless, deteriorate and then perk up at the mention of Millwall Football Club. Throughout our brief banter I nervously slid the Westlife CD deeper and deeper into the carrier bag, not the sought of thing to be viewed by a punk rocking Millwall fan. Mad Mick may be a gentle giant and a lovely guy, but a good old thumping and broken teeth wasn’t something I wanted to risk on the wind down to my holiday.

I left Mick with this post already taking shape in my head, praying his Internet had been cut off and if not, he was allergic to mangoes. I felt better after realizing I wouldn’t see Mick again until the New Year and if he had viewed this post then hopefully his doctor would have upped his dosage or there would be a World soap shortage and he’d have that to worry about. Mad Mick a legend of any lunchtime.

Photographs    Vivitar 8010  I am seriously thinking of taking my camera back and asking them to replace the trial leather camera pouch with its original carry case, the plastic grey dustbin that it stated in the catalogue.