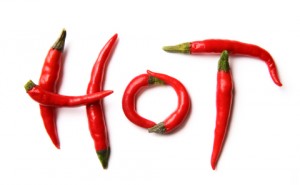 Part of the Red Hot Chili Peppers hit song Dani California includes the line, “ One for now and eleven for the later, ” they surely could not have been singing about red birds eye chillies. Prik ki nu daeng is the Thai name for the fiery red chillies, which roughly translates to Mouse Sh*t Chillies.

The chilli plant originates from South America and has many varieties of differing size, and excuse the pun, degrees of strength. Late in the 15th century chilli plants were brought over to Europe and around fifty years later, found there way into Asia. Ever since Asian cookery has used these little powder keg peppers to great effect. Nowadays they are an ingredient of many Thai dishes, Tom Yum Kung, Red Curry and the red-hot spicy papaya salad Som Tam are a few that have rolled off a burnt tongue.

The North and North Eastern provinces of Thailand are the major harvesters of the chilli plant, providing a high level food source and much needed income to some of the poorest regions of Thailand.  High in Vitamin C, the chillies health benefits are offset against the high level of indigestion and stomach complications they can cause.

A story from the Thai Visa forum posted in 2004, tells of an annual chilli eating contest in North East Thailand. The competition was won by Mr Prachuap Mungkratungklang who ate eight ounces of chillies in 12 minutes. Many of the contestants fled the competition in seek of water, and one forum comment said, “Oh, you would want the toilet tissue in the refrigerator after that contest“, and was answered with, “…or wipe your butt with snowballs“. A more lengthy article detailing a similar 2002 contest at Bangkae, Bangkok, can be viewed on The Nation. 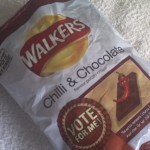 The British snack food giant Walkers Crisps, based in the English city of Leicester, and owned by US company Pepsico, have recently ventured into the red chilli market. Last year Walkers launched a competition to find a new all-conquering crisp flavour. The competition is now in its final stage with six new flavours competing for the £50,000 (2.5m baht) first prize. The winner of the ‘Do us a flavour’ final will also receive 1% of all future sales, possibly in excess of £55000 per year for its life cycle.

The six flavours competing the final are : Fish & Chips, Onion Bhaji, Cajun Squirrel, Crispy Duck & Hoisin, Builders Breakfast and Chilli & Chocolate. The chilli chocolate snack bar has been around for many years, but chilli and chocolate crisps, well, I just had to try them. To me they tasted just like smoky bacon… they were very disappointing.

Which flavour do you think would be the winner for you?