Cobra – King of My Fears

If I ever had the misfortune to take a choice between being caught in an uncompromising position with Mike Tyson’s lover or coming face to face with a King Cobra, my answer would be ” Don’t hit me Mike, you’re out all night drinking, playing cards and ….” 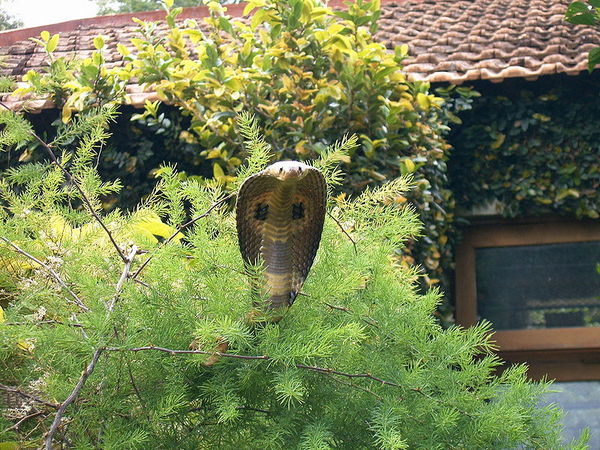 The King Cobra grows to an average length of three to four metres and with a single bite its venom can kill an elephant within three hours. If a person is not given a  shot of antivenom, they can die as soon as five minutes after the Ophiophagus hannah (King Cobra) has applied their nastier version of the Glasgow kiss.

When I first met Wonderful Wi’s sister-in-law Maeo I couldn’t help but notice the swollen and weeping puss filled wound on one of her feet. I asked how it had happened and Wi explained.

Her brother and sister-in-law live on the outskirts of a village about five kilometres from Udon Thani city. Early one morning Maeo went into the bathroom and unaware to her a spitting cobra was resting on the tiled floor. The cobra immediately struck, biting Maeo on the side of her foot, her screams alerted her husband who bravely disposed of the snake. Thankfully the wound has been a long time healed but the story is always fresh in my mind when I enter a bathroom in Thailand.

Our village home in Ban Norn Chad has rice fields backing on to it and spitting cobra’s have been seen not too far from the back of our land. I have been assured that the last sighting was a long time before. Very much like myself, Wilai is prone to a nibble on her fingernails at the thought of even the smallest of snakes.

The King Cobra is the largest venomous snake in the world although not every bite given is fatal, with one test suggesting that around 33% of cobra bites analysed showed no sign of envenomation. Having read all the above, you’re probably thinking the King Cobra should be avoided at all costs. I am in total agreement with you, however there are some people who actively seek the King Cobra and welcome it into their everyday life.

Ban Khok Sa-Nga in Khon Kaen Province is known throughout Thailand as King Cobra Village. Most of the households in this village keep cobras in wooden boxes next to their homes. Sightings of King Cobras crossing the village roads are common. 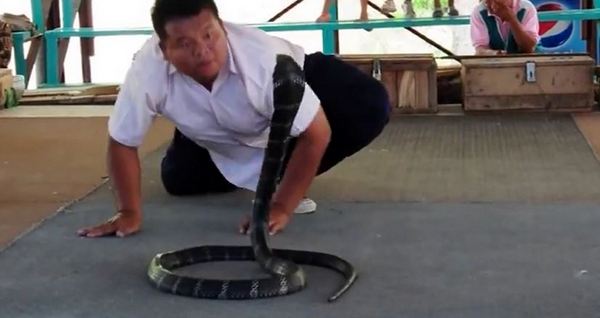 The villagers put on regular King Cobra shows for the visiting tourists, teasing and prodding, even putting the snake’s head into their mouth in an attempt to agitate the King Cobra into striking. The showmen and women like to prove their mastery of these deadly snakes by avoiding the strike. Some children even participate in the famous King Cobra Village shows.

Their skills, honed from childhood sometimes let them down, though rarely resulting in death there is no antivenom stocked in the village. The villagers use a more alternative remedy for the venomous King Cobra bite. They use an herbal leaf which they crush and mix with lemon juice and then rub over the punctured skin to counteract the deadly toxin. They also put the herb into their tea so as the herbal remedy is consumed on a daily basis. I’ll certainly drink to that.

“Cobra home” by Prashanthns – Own work. Licensed under CC BY-SA 3.0 via Wikimedia Commons.