Wikipedi is a free, multilingual, open content encyclopedia project operated by the United States-based non-profit Wikimedia Foundation. To me, Wikipedia is an invaluable source of information and ideas. A bloggers dream. When work has dulled my imagination and my mind is running down an endless barren path, Wikipedia is my saviour. Thai proverbs was the latest diamond I found.

I am not an ex pat but I have spent over two years of my life in Thailand, albeit in broken spells. Of that time much has been in Thai villages and so I feel I can offer some insight into the everyday ways and life of Thai country folk. Thai proverbs and the farang, when east meets west, do they fit hand in hand. 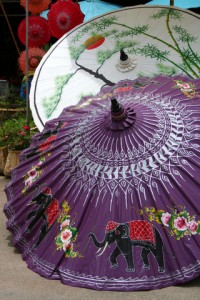 Literal: When in the city of the slanted-eyed, do squint your eyes.

Village life is made a whole lot easier by blending into the background rather than standing out like the proverbial sore thumb. Taking even a small role among the community is far better received than standing alone and being looked upon as aloof and cast apart from the villagers. You don’t have to go to every wedding and village fete, but the occasional visit will be well received.

Meaning: Follow the majority, if you are minority; adapt to situations and people around you.

English version: When in Rome, do as the Romans do.

Literal: Before the nut is cooked, a sesame is burnt.

The family member who borrows the motorbike once a week, soon it becomes everyday. The only time the motorbike is there is when it’s out of fuel. The uncle who goes to your fridge and takes a beer without asking, or the one who takes a cigarette every time you prepare his wife a drink. I know Wonderful Wi has had problems in the past with family members borrowing small amounts of money and not paying it back. These little incidents, no matter how trivial they may seem, need to be dealt with before they snowball out of control.

Meaning: Don’t let issues hang for too long until they’re all burnt.

There is a beautiful five bedroom house in our village, it was paid for by a European gentleman for his Thai girlfriend and her child. I’ve never seen him and Wilai says he has not been around for many years. After the house was built, and his money depleted, he returned home to work in his own country. Apparently things didn’t go as he had planned and a lack of funds meant he was unable to return to Thailand and the couple are now believed to be separated. Two people and one small child, surely a smaller home may have not broken them apart. Which begs the question, Is it necessary to build a bridge over a small stream?

Meaning: Having something is better than having nothing.

Literal: Eat the spicy chili sauce only from one cup.

Being faithful to your Thai partner is paramount to your well being in any Thai village. Faithfulness should be a strength within any relationship, and especially so in a Thai community. To lose the trust of your wife or partner can easily lead to a distance widening between you and her family. Mistrust and anger are often the shove that sends many westerners spiralling down a steep and slippery slope.

Meaning: Always be faithful to your wife.

Dealing with law, legislation and the inevitable red tape is an unenviable task unless you are equipped with the best tools. Your partner is your best tool, so use her. When dealing with important financial decisions and personal issues, if your Thai language skills are not up to much you can easily miss the smallest detail and that can lead to a lot of problems. Seek the advice of your partner, her family, and friends, whenever you are unsure of the really important affairs. You may know it all in your own country, but on foreign soil and with an alien tongue, only a fool would try and catch a tiger with his bare hands.

Meaning:  Being ill-equipped in tasks that require preparation.