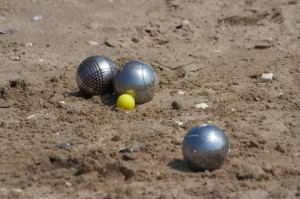 One drink too many can sometimes lead to a very hefty bill. I was sat in the Go Thasadej Bar, NongKhai and decided to go for it. I’m not talking about a runner, just pop back to the Indo – China market and buy what I’d been mulling over for the past hour.

I told the barman I’d be back shortly. He gave me that ladyboy look and without uttering a word tossed his hair back, spun on his heels and walked away with his butt swinging like a pendulum clock on fast forward.

I spat strange thoughts out of my mind and headed off into the market and bought two sets of boules. At the time I didn’t know, but the metallic French balls would give birth to the Ban Norn Chad Boules Games 2008.

Opposite our village house is the modest home of an elderly couple whose front garden area is used as a meeting point for many people. Most days a group of six to ten people, mainly men, gather and pass the time of day with idle talk and on very rare occasions a beer or lao khao. At weekends they hold small scale cock fights, the contestants breeding lacking the necessary blood line to interest even the most desperate KFC salesman. It’s a kind of Thai social club without any alcohol.  Back to the boules. 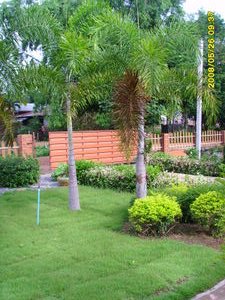 Wonderful Wi kindly pointed me to a corner of our garden that for some reason she’d left bare of flowers, plants and trees. I thought it odd but was very pleased. The soil was perfect, hard with a little give, just enough bounce and covered in small loose stones to allow the occasional ball to kick and change it’s course, an ideal boules pitch. It was in full view of the Ban Norn Chad Social Club and its idle members.

The next couple of days I spent time fine tuning my googly, arm ball and wrong un, practising for a good hour in the early evenings. Wi started giving me a few games and my skills started to emerge, noted I’m sure from the six to ten alcohol free social club members. On the third evening Wi decided she had too much to do in the garden and wouldn’t be able to play boules.

I am sure her reasons were simpler, she was bored of beating me. My wrong un was right and my googly needed a google search on direction. I decided to grab a beer and practice alone, perhaps I’d work on my arm ball. Shortly after the Ban Norn Chad Boules Games 2008 officially opened.

The opening ceremony was void of a finely tuned athlete proceeding up Soi Buffalo carrying a gold leafed flaming torch. A bottle opener launched the games with a kcchhh and before my froth had settled in the glass, I was stood in the shadows of the social club members. About 250 pearly white teeth with about four baht between them, stared hopefully at me……oh shit.

Being a kind hearted soul I sent one of them off to the local shop and he returned to a heroes welcome loaded up with beer, lao khao and cigarettes. We teamed up into groups of three and the games started, but which team could remain sober enough to win the day. A thoroughly enjoyable alcohol fuelled evening of sport followed, and the next evening and the one after.

Even better news was that the social club membership had grown. Now about a dozen participants were battling against the adverse effects of alcohol and nicotine to lay down that perfect pitch and win the game. What the hell it was only money. I even purchased a spotlight in an effort too boost the shops alcohol sales and maximise the “friendly games” even more. 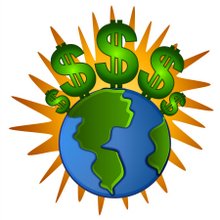 As far as Games closing speeches go it was quite an effective choice of words by Wi, aided by mama’s speech at the social club the next day, the games were officially over. The games will however be remembered for a miracle that happened one month after. Sadly I wasn’t there to see it, I was back home in England.

A giant spaceship appeared hovering over the sacred boules pitch and released giant bumble bees, thousands of them. They swarmed, then formed giant dollar signs and settled on the boules field of play. Within minutes they and the spaceship were gone and days later the famous boules patch was covered in plants, flowers and trees. Amazing and no more boules for me.

I am happy to report that the social club has now invested in two sets of boules and are regularly seen playing the sport. They do seem to be taking it all a lot more serious though, as if they are training for another big event. Their games are now played without the use of alcohol and cigarettes….that’s what I call dedication.