A Little on the Large Size 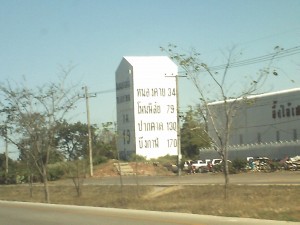 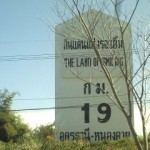 If Lemuel Gulliver the creation of Johathon Swift in his book Gulliver’s Travels was washed ashore in Thailand there would be times when he would wonder if he was back in Lilliput, but this time as one of its six inch citizens. They say everything is big in Texas but Thailand has in itself got a few things that might tilt a Texans ten gallon hat.

The photographs above and right is a kilometre distance marker showing 19 clicks remaining on the highway from Nong Khai to Udon Thani. I have passed this land mark on many occasions and each time it still amazes me with its striking yet so familar look.

The top photograph gives a better idea of the sheer size of this distance marker. Does anyone know of a taller one in Thailand or indeed the world. Stood next to this would convince Khun Gulliver that his days of peering down on the people of Lilliput, were in heady days long gone by.

The Baiyoke Tower II in Bangkok is one of the tallest buildings in the world. At 304 metres high and rising 88 storeys the building includes a hotel with over 670 rooms. I checked out online the cost of a stay at the long legged Baiyoke Sky Hotel and a Deluxe Sky Zone room was on offer at 3,600 baht per night, discounted from the usual rate of 6,474 baht.

The room rate includes a free breakfast buffet and a free drink in what must be one of the worlds most elevated bars, the hotels Roof Top Bar & Lounge. With Central World Plaza only a short walk away the discounted deal looks to be a bargain rate for Bangkok and an ideal stopover for any wannabe shoppers.

Only 25 kilometres from Suvarnabhumi International Airport the Baiyoke Sky Hotel offers a fitness centre, massage, sauna, swimming pool and plenty more hotel facilities. A room with a view across a city that never sleeps, this mammoth structure would even bring Gulliver down to size.

The grainy photograph on the right is a reminder to myself that onions and eggs taste delicious pickled, but buying a camera in the same state is not a good idea. My Vivitar 8010 camera certainly let me down with this snap at Phu Rua Flower Festival in late December last year. The giant thermometer had a constant stream of festival visitors patiently queueing to have their pictures taken alongside this unusual landmark.

The thermometer appeared to be a fully working model because on a decidedly chilly morning in the mountains of Loei Province it was reading 15 degrees Celsius.

The picturesque flower festival is an annual year end event in Phu Lua and any garden enthusiasts would find the festival an enjoyable experience in an area of unspoilt mountainous countryside with sprawling panoramic views.

Pattaya has for a long time been the leper to avoid by many foreign tourists and a resort used by many others to suffocate and strangle their own morals.

The photograph on the right shows Khao Chi Chan and its image of a sitting Buddha named Pang Man Wichai (left click for larger view) carved into the hillside in Chonburi Province near Pattaya.

Over 100 metres in height the mix of Sukothai and Lanna art is an attraction for both the more culture minded tourist and the tattooed, bare legged, calorie enhanced holidaymaker dragged there by his Thai bar girl.

I visited Khao Chi Chan many years ago and was suitably impressed with this magnificent hillside view. It is a very popular attraction for Thai families and young couples and so a good dress code is advised when visiting. The image was embedded onto the hillside in honour of His Majesty King Bhumibol in celebration of the 50th anniversary of his reign as King of Thailand.

Khao Chi Chan and its Pang Man Wichai image are clear evidence that even Pattaya has appeal to those prepared to research beforehand the eastearn seaboard resort that does little to promote its culture and wash away its tacky name.

The Giant Swing is situated in front of Wat Suthat, Phra Nakhon district, Bangkok. This giant construction is made from teak tree trunks mounted on a circular base and is representation of mountains, earth and seas in a Hindu story.

Brahma the Hindu God of Creation having given birth to the world then sent Lord Shiva “Auspicious one” to see if the mountains and earth were solid or whether they would crumble as prophesied. The Giant Swing is a popular tourist attraction in Bangkok.

If Johnathon Swift had written a 21st century version of Gulliver’s Travels and Lemuel Gulliver had been shipwrecked and washed ashore onto one of the beautiful beaches of Thailand, how very different he would have been treated.

A country full of big hearted people with even bigger smiles, they do tend to like somethings to be a little on the large size. How come their large T shirts are always a little too small, over to you on that one.

Photograph      The Giant Swing by  Mattana