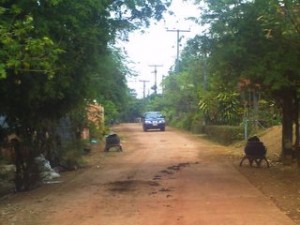 It has been a while since I last took a virtual stroll down Soi Buffalo and up the driveway into our village house. Today I’m going to take the chance to look at what the gang – Wonderful Wi, Mama and Cola have been getting up to.

Cola has been taking up a new spectator hobby in the form of gardening observer much to the frustration of Wi who herself has been busy with barbed wire and fence posts. Mama is keeping unnaturally even tempered as the house settles down to some welcome peace and quiet.

Udon Thani has been hit with high temperatures lately with the afternoon temperatures hitting the 40 celcius mark. The searing afternoon heat has restricted Wi’s gardening slots to early morning and late afternoon with young Cola now a regular gardening companion, although he’s not got the rules quite right yet.

Wi has been planting flowers and Cola has been keen to tag along and pick up a few tips from the green fingered village girl. Cola sits and attentively watches Wi dig a small hole in the soil and nose twitching watches her plant the flower and replace the soil. Well done Cola you could probably do it on your own now, it would appear not so. 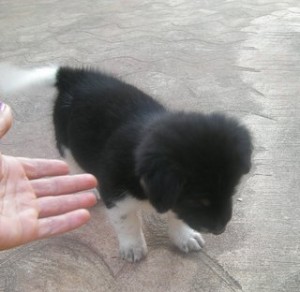 Wi moves herself along a couple of feet to plant her next flower and Cola follows suit, sitting on the first flower. After a few stern words and a couple of squashed flowers Cola is shown the red card and butt stinging exits the lawn to trudge back to the house. Game over and an early bath for young Cola.

Cola needs to learn a lesson from me and take a backseat or garden seat when it comes to working amongst the shrubbery. Wilai likes to work alone in her garden, until something heavy needs moving and then I’m only too glad to help.

Take a chill pill Cola or you’ll soon be a mutt with no fur on your butt, believe me.

Moving from one end of Cola to the other, the spoilt puppy has been dining rather well lately. Cola has been eating fish and sticky rice for his evening meals and now has a preference for this gourmet dish over his previous favourite fried beef and non teflon rice.

My regular readers will know that mama has made several failed attempts to wrestle control of the household from her youngest daughter. With her last coup d’état ending in a demoralising defeat, mama has been less upbeat of late. 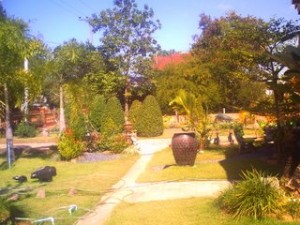 The land upon which our house is built has a wall along the front and down both sides leaving about half of a rai of open ground at the back. This open land adjoins a further three rai and for the last who knows how many years one of Wi’s uncles has farmed the whole plot with rice.

Wi has for a while now feared that her uncle considers our smaller adjoining land to be his. The harvested rice is distributed amongst the family and her uncle apparently now looks upon this land as his own. Not any more, Wilai has enlisted the help of local builders to stamp her uncles “claim” firmly into the ground.

Last week saw the completion of fencing to segregate Wi’s land from her uncles farming plot. The fence posts and barbed wire will I imagine look unsightly alongside our raised house plot and modern wall but it should send out a definite message from young Wilai, “Uncle please don’t take a fence but this is my land. “

Over the last year I have seen Wilai grow in confidence and loosen the tight grip her mother previously held over her and the whole family. The “money tap” from which her family have at times drank in gulps has now been all but turned off as Wilai’s self esteem has blossomed and with it an assured but humble young lady has grown. A new leader of the Buffalo Gang has come to the fore.