A Bucketful of Innocence 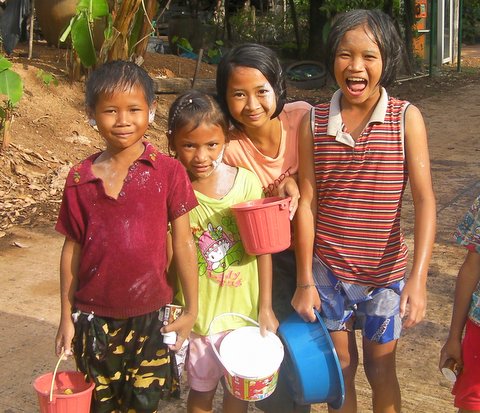 British kids aren’t all bad no matter what the newspapers say about them. There’s some good one’s out there surely…..somewhere in the world there must be… 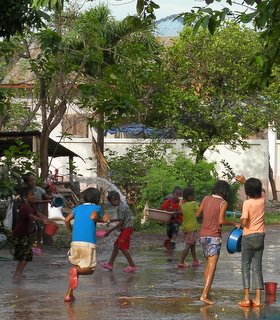 …..Not only were British children ranked ‘worst off’ in the developed world – with the highest rates of drunkenness, obesity, bullying, early sexual intercourse, cannabis-taking, and teenage pregnancy – they made it clear that they felt worst off: unhealthy, unhappy with family relationships and friendships, more likely to feel left out, disenfranchised. Ultimately, the picture painted by the Unicef report was of British childhood as the ‘toxic’ equivalent of a nuclear-waste dump, oozing through the soil of this green and pleasant land..guardian.co.uk

If a bucket really was filled with innocence then Great Britain would now have a permanent hosepipe ban. The hosepipes are well and truly spraying away in Thailand, as respect rather than petulance floats on the surface of the Thai kids Songkran buckets.

The children in Wonderful Wi’s northeastern village are always playful but respectful at the same time, I have visited the village shop many times and the kids sat outside have never asked me for anything. The word ” want “ is in simple terms your interpretation of their big brown eyes.

They have an energy that is channeled into enjoying themselves with the simplest of tools and a fun loving nature that bodes well with their Buddhist beliefs. A bucketful of innocence thrown with a smile.

….At a time when fears over childhood obesity are growing, the shocking statistics reveal that from the age of five primary school pupils spend on average £106.20 on sweets and £106.70 on sugary drinks each year..mirror.co.uk

…Several of the 500 12 to 17-year-olds quizzed said they had had their stomachs pumped, half admitted getting into trouble with police because of drinking and 13 per cent had days off school with hangovers. Half of the 12 and 14-year-olds had already had a bad experience with alcohol...mirror.co.uk 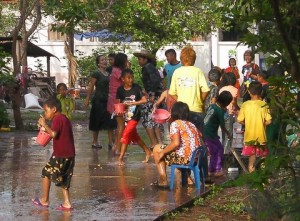 I have never seen graffiti in Wilai’s village nor groups of teenagers stood menacingly on street corners. There’s never been sticks or stones thrown at our home and no words to ever hurt me, only a childs shy glances tossed in hope. The word  ” hope “ is in simple terms your interpretation of their big brown eyes.

I’ve never seen skateboards or mountain bikes and only the occasional mobile phone. I have seen plenty of youngsters playing football, badminton, tag, flying kites and two brothers or sisters riding the same bike. All of them are simple pleasures that reflect an innocence of life. No kiss chase or throwing stones at the old bugger and his wife.

All the photographs in this post were taken by Wilai during Songkran earlier this month. They show me that the kids in Wilai’s village and I’m sure every village in Thailand, put their heart and soul into enjoying life but to them it’s all about sharing their joy with others. I just hope they put lids on their buckets to keep some of that magic inside and sprinkle a little bit of innocence throughout their lives.