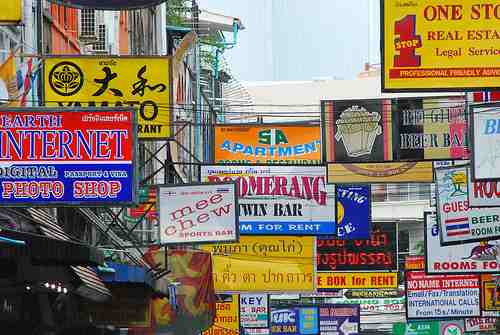 They first met on the roof of a train heading from Bangkok to Pattaya, both men had been a few baht short of the fare. Two men from very different backgrounds and with differing opinions on life, but both with one common cause. They had a hunger burning inside of them to become Soi (street) Dog Millionaires. A basic knowledge of Thai politics is required to fully understand $oi Dog Millionaires.

Wai Hai Man – Born in England of Thai parents and university educated. He fell on hard times in Bangkok and has gone to Pattaya to seek his fortune.

Tee Hak Sing – Former headman of a northeastern village he is in Pattaya to claim fame and fortune as a cabaret singer. 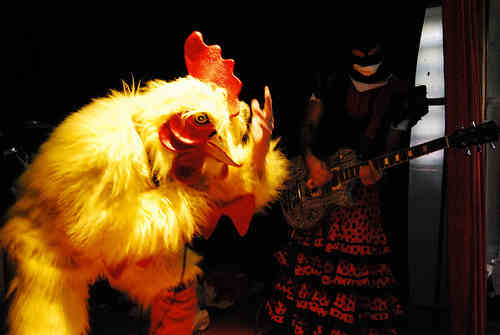 Two months have passed and our two wannabe’s are now renting a cheap room above a small restaurant on the outskirts of Pattaya.Their landlord is an ex TV chef whose cookery program wooed TV audiences a few years back. Dressed as a chicken, the poultry receipe specialist came down to earth with a bump when a fresh outbreak of Avian flu forced TV producers to pull the plug on his show.

Masterchef Redheart took his meagre life savings to Pattaya and bought a run down restaurant with two small rooms above. The struggling restaurant is frequented mainly by Thai’s and our two wannabe’s work there six nights a week. Tee Hak Sing has a nightly spot dressed up as a chicken belting out his red themed songs and Wai Hai Man is chef’s assistant and waiter.

It’s the early hours of the morning and the restaurant has just shut it’s doors on another day of poor business. The three friends are counting the days takings and the TV is showing an English Premiership football match between Newcastle and Manchester City. The football commentators voice raises to a high pitched shrill alerting the three buddies to a Manchester City goal.

Oh…you mean lobbed him and low into the net.

No he means Robinho, the centre forward…..a classic example that a proper university education really does place one above your rice farmer….Bloody Brazilians.

Eight hundred and forty six baht takings and here’s your pay. I’ve taken off your food and rent for the day.

Redheart slides a fifty baht note to both of the football loving friends, bids them goodnight and leaves them to enjoy the rest of the game. Tee Hak Sing takes a pair of plastic clapping hands off the table and as the final whistle blows applauds the victorious Manchester City team off the pitch. He had once been the proud owner of a Manchester City football shirt but after losing his status as village headman he had been forced to sell it.

Only days earlier the two soi dogs had found a discarded box full of plastic clapping hands while taking an early morning stroll along the beach. It was time to once more discuss their plans for tomorrows “Big Sting” on Pattaya beach. 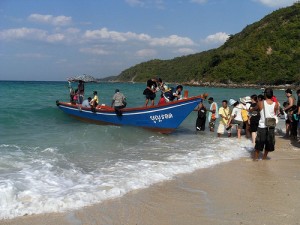 I get on the end of the queue of tourists waiting for the island boat trip. As the last one gets in I discreetly release the smoke filled jam jar of wasps into the boat and make a rapid retreat.

Along I come, plastic hands flashing like blades of steel and swat the buggers to bits.  You arrive back dressed as a chicken and sing at the top of your voice “Clap goodbye to your bites and itches with Pattaya’s Amazing Clapping Hands, only 200 baht a pair.”  Perfect…… and 4000 baht of sure fire sales.

Pull a few of my yellow feathers out and I’ll give you a fifty fifty split.

Photograph     Sign of the Times by  Bob in Thailand