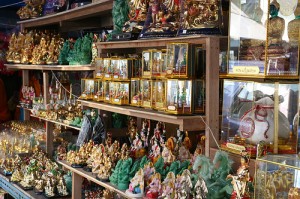 The western world calls it a talisman but in Thailand the lucky charm worn by millions is named an amulet although they are not always lucky. Such is the popularity of these lucky charms in Thailand that in April 2007 a woman was stampeded to death at an amulet auction in Nakhon Si Thammarat province. A very sad tale indeed.

Thai amulets are usually worn around the neck and thought to bring good luck and ward off evil. The pendants normally have a carved or engraved image of a Buddha or revered Monk and are crafted from various materials.

All around the world different things are used to bring good luck, Beyond The Mango Juice takes a look at a few of them and finishes with a very strange Thai ritual.

United Kingdom
In the UK a horseshoe with its ends pointed up is fixed to an outside door to bring good luck, if the ends point down then bad luck will occur. The horseshoe must be a used one preferably found, and is hung at a height that someone can reach as touching the lucky charm will bring good luck. Very sober.

Taiwan
Taitung is in one of the more isolated parts of Taiwan on the eastern side of the island. One of its lucky rituals involves volunteers throwing firecrackers at the lucky participants. To bring good luck at the start of the Lunar New Year and to ward off evil spirits, some of Taitung’s citizens purchase fireworks to become the target in this 50 year old tradition. Burns are common and a trip to the hospital is seen as an absolute last resort. The ritual is called Han Dan and is named after a God who feared the cold and the throwing of firecrackers is to warm him. Strange indeed.

India
Solapur is an industrial city in Maharashtra, India and has an average elevation of 458 metres above sea level, for some it’s a little bit more. Muslims in this western area of India have a strange ritual in which babies are thrown off a temple roof 50 metres above the ground, but don’t panic because organizers say no baby has ever been hurt. The beautiful “bouncing” baby is dropped from the temple roof where down below a crowd waits with a large bedsheet to catch the confused toddler. The youngster is caught after the first bounce to bring good luck and for the child to grow strong. Strange but true. 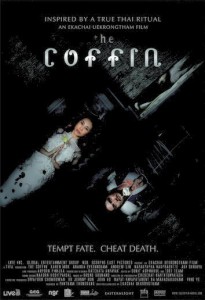 The Coffin (2008) is a movie that is set in Thailand and the plot evolves around a very strange real life Thai ritual. The movie is about a woman who having been diagnosed with cancer runs off to Thailand to avoid telling her fiance about her life threatening illness.

Once in Thailand Sue played by Hong Kong born and London University educated actress Karen Mok discovers the Thai ritual of lying in a coffin to rid oneself of bad karma and give birth to a new life.

Sue is pursued to Thailand by her boyfriend Chris who participates in the ritual in  the hope of saving his girlfriend’s life. At first their fortunes change for the better but then strange incidents start to occur.

The movie also stars Thai actress Napakpapha Nakprasitte and was a number one hit in Thai cinemas last year but how does this bizarre ritual rank in real life Thailand today.

Non Loeng Sadorcro means “lie in a coffin, cast away bad luck” and this rather bizarre service is performed at some temples in Thailand. The bearer of bad karma lies in a coffin and monks chant death rites to them. The person then rises from the coffin reborn and rid of all ill luck.

With unemployment on the rise in Thailand this strange Buddhist ceremony is being performed more regularly as Thai’s seek ways of changing their fortunes. Money, love, health and happiness are all sought after stepping out of the coffin reborn and released from the bad karma of their previous life.

A mass funeral some years back in north east Thailand was attended by over 10,000 people. Death and rebirth all for a donation of about 150 baht. I’m starting to think a few burns from lobbed firecrackers doesn’t seem such an ordeal afterall.