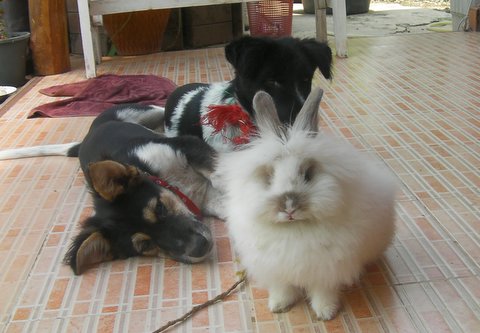 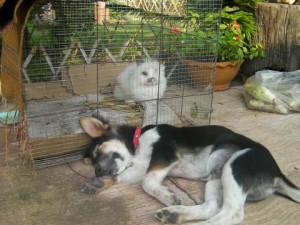 I read a post a while back on Thai Girl that posed the question as to why the younger generation of Thai people so often make a raised two fingered V pose in their photographs.

Well the fad has certainly caught on because rabbits have started doing it, see for yourself in the photograph above. I say rabbit…but I’m not so sure because it’s one of the fattest and weirdest looking ones I’ve ever seen.

Looking at the size of it would make the hungriest of pythons consider practicing jaw stretching exercises or yodeling before attempting a lunch that might induce myxomatosis rather than heartburn. Of course that’s assuming the python can get past the ever alert guard dog Cola.

Rabbit  the rabbit spends most of his time locked away in his cage because Wonderful Wi is convinced that the other dog in the top photograph Gaan is taking yodeling lessons himself. 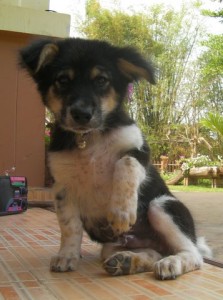 Cola continues to spend most of his young life in the horizontal position rather than the upright pose. If Cola sleeps too much more in the afternoon sun then I’m expecting to be greeted on my return to our village house by a straw dog rather than a puppy dog. Get a life Cola  that’s sticky rice you’re eating not benzodiazepines (sleeping drugs). Cola  is pictured on the right in a rare vertical stance but by the look of things he appears to be in the process of settling back down for an afternoon nap.

Wilai says that Cola  does occasionally have a run around the garden and has quite a turn of foot, more so than his fellow puppy Gaan.  Of the two pups Gaan is the more adventurous and does escape from the garden from time to time but quickly returns, afterall it’s a big bad world out there and with beef, pork, chicken, sticky rice and milk on the menu you wouldn’t want to miss out.

The Buffalo Boys are the junior members of the Buffalo Gang whose membership is made up by myself, Wilai and her mother. The gang has the rather affectionate name due to me christening the soi (street) our house is in, Soi Buffalo. This rather endearing name comes about from having to continually weave my way around buffalo droppings on the road to the nearest village shop.

While writing this post I popped out into a warm and sunny English afternoon and had a few beers at my local. I also made a telephone call to Wilai that bore significance to this story. For weeks I have been teasing her that she couldn’t call a rabbit by the name of Rabbit….during our phone call she told me a new name had now been chosen. The rabbit is now called Noo (mouse), apparently he reminds Wilai of a mouse. Wilai that’s the biggest bloody mouse I’ve ever seen. To me he’s still Rabbit  the rabbit. 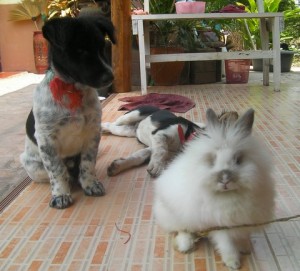 I am looking forward to my trip to our village house sometime this month and a chance to meet the Buffalo Boys. A trip en route to the village will involve a stop at Tesco Lotus and a chance for me to buy a few treats for the two puppies and mouse. Carrots, dog biscuits and squeaky toys will be somewhere near the top of the shopping list.

Finally if you need any convincing that Gaan  is indeed a wannabe yodeler then take a look at the photo on the right. Cola is once more in his guard dog position and Gaan seems to be eyeing up Rabbit . Have you got a caption for the photo. Here’s my rather lame effort.

” They reckon mouse tastes a lot like rabbit, think I might give it a go……yodel, yodel, day, dee….”

All the best and stay your way. Hoo Don.