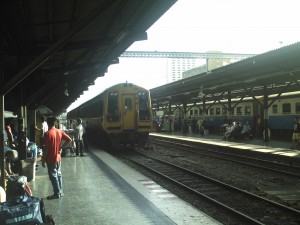 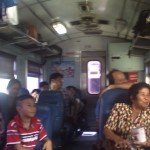 It’s inevitable that in times of war prisoners will be taken. Some if their fate can be called kind will return home, their minds and bodies scarred forever by the rigours of torture.

I had thought the first four days of my holiday had been enjoyable but all along I had been setting myself up to make Day five one of arduous torture. For the previous four days I had consumed large quantities of Tiger Beer and smoked over 200 cigarettes. Today I was going to be locked inside a giant tin can for 10 hours and possibly be deprived of both. An asthmatic thousands of miles from home.

The train left Bangkok’s Hua Lamphong railway station at 06:20 in the morning and pulled into Udon Thani at 18:20. Inbetween was 600 minutes of sheer torture.

Our original plan had been to travel up to Udon during the day in style. First class was only available on the overnight sleeper so we downgraded and took the day train home, second class would be good enough for a couple of village hands like us. 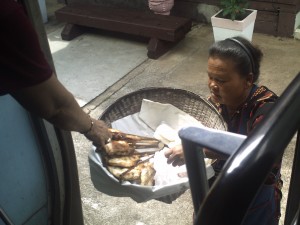 Bangkok, Autthaya, Saraburi…..The train was packed solid and the sun had woken early and was burning bright. I’m not sure if the vents in the carriage ceiling were part of a broken air con system or purely to let the hot air out or possibly in.

The carriage was already starting to cook and the swivel fan above us seemed to miss me out on many of its 180 degree arcs. Wonderful Wi was suffering similar hot flushes.

Palm trees, banana and heaven knows what else kind of tree, all standing vibrant green against the clear blue skies. Klongs, ponds and a bridge over a river that snaked round a bend and then it was gone, the train stopped for no painted landscape or nature’s beauty. Beautiful gardens wrapped around modern houses and wooden shacks all in a row. 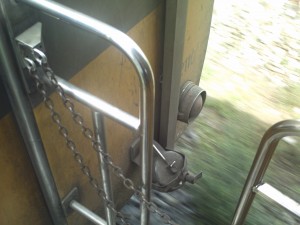 Khon Kaen, Namphong, Udon Thani…..The train stopped more times than I care to remember. At most stations food vendors would board or place their basket up onto the carriage floor and make their sales pitch. Chicken, pork, fruit and some things that resembled what your cat had just thrown up and your dog wouldn’t have the audacity too drag in. There were others selling newspapers and magazines, on and on, all the way to Udon. There was also a railway bucket boy who regularly came round selling drinks. Water, orange, coke and milk, all packed into a bucket filled with ice and not a Tiger in sight.

I knew from previous train journeys that I wouldn’t be able to smoke in the carriage but I knew where I could. Between carriages there is a small adjoining platform (see photo right)  with railing on either side. You stand there with the ground hurtling along beneath you, smoking and riding every twist, turn and bump. A Thailand train trip is far more effective than any nicotine patch.

Then she came into sight, I’d missed her but by the near end of our 10 hour journey I was missing her more. A first class train trek on a second class ticket and there she was Udon Thani. A most welcome sight.