Giving a Little Bit Back 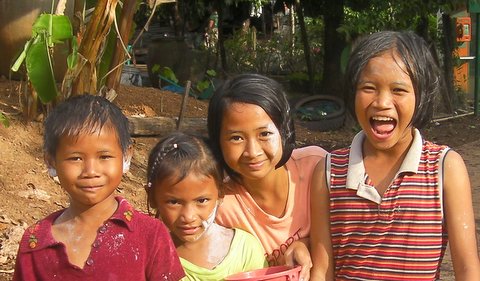 I put away my lemon slice novelty pen and picked up the Royal Blue Parker ball point, it was time to write a serious post. Me and serious posts have a tendency to fall out after a mere paragraph or two.

The School of Thailand is Thailand itself, an open university of life. When you choose to walk, drive or fly away from the Land of Smiles your person should be far better than the one that entered. In my ten years of travels to Thailand I have become a better, more caring and understanding person and I’m grateful to the country and its charismatic people for giving me that. Last month I had the chance to give just a little bit back….. How am I doing so far…..You’re doing well Hoo Don, keep concentrating and leave the lemon slice alone.

First lets head back to England where my story starts. Adam Gorman is a work colleague of mine in my hometown of Swindon. Sometime last year we were discussing Thailand and I mentioned that I was planning to visit a second hand book store in our town centre to buy some children’s story books to give to Wonderful Wi’s village school. Adam has a son and daughter and he kindly donated some books to me that his children had outgrown, a kind gesture and I promised to hand them over on my next trip to the Land of Smiles. That trip was in December and when I decided to visit the school it was shut due to an extended New Year break and so last month I finally got the chance to give Adam’s kind donation to the headmaster of Ban Norn Chad’s village school….. Can I mention Brer Rabbit, he was a big favourite of mine when I was a kid…..Hoo Don, No. I’ve read a few of your rabbit posts and they ain’t exactly serious. Concentrate HD, concentrate. 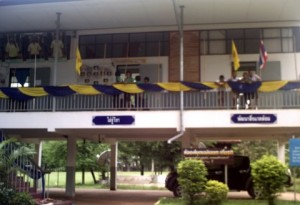 The school in Wilai’s village in Udon Thani Province is for the younger kids from the age of five up to twelve. All of Thailand’s state run schools appear to look the same and be of a similar condition, tidy and in need of a lick of paint, the village school was no different.

Adam donated 29 children’s books and Wilai and myself added a couple of volleyballs for the more sporty and less academically minded amongst the 100 or so kids at the school.

The presentation was no elaborate affair with a simple handing over of the gifts which were in plain plastic bags, what was inside the books was far more important than the manner in which they were held.

The headmaster, two teachers and Wilai’s aunt who is the school cook gratefully received the donation and it was smiles all round as they lined up for a couple of photos…..Just a little mention of Brer Rabbit, just for the kids…. Keep on the straight and narrow Hoo Don. I know you, it’ll start okay and work its way into something distasteful. Keep going you’re nearly there. 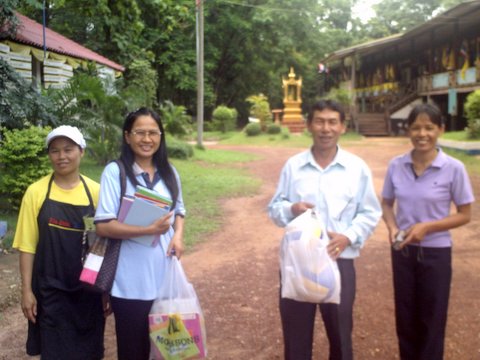 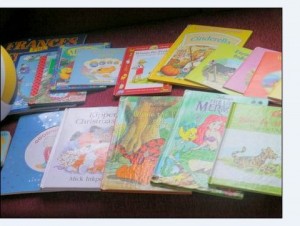 The idea or hope which might be a better choice of word is that the books will give the kids hours of entertainment, education and just maybe change one or two of their lives.

If there was a future doctor, lawyer or country vet somewhere in the stifling hot classrooms high above me then just maybe the books might help along their career path.

My guess was that at best a future bank clerk or Thai Airways check in employee was going to get hours of fun reading about Cinderella, Winnie The Pooh and Snow White.

Most of these kids would be heading for the farms and rice fields in one of Thailand’s poorest regions and maybe one day when the afternoon’s searing heat was burning into their backs the adventures of these story book characters would come flooding back and help them make it through the day. I was just giving a little bit back…..Hoo Don are you making a gin and tonic or is that your lemon slice novelty pen you’re holding…..Sod it, I’ve got to do it. He’s my favourite rabbit. 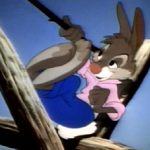 When I was a kid I loved reading Brer Rabbit stories, he was my favourite childhood character and embarrassingly I sometimes think of him even now. Brer Rabbit and Brer Fox would give me the kind of fun that I suppose computer games give many of the kids today.

Brer Rabbit used his wits to overcome many a tricky situation, great memories for me and I hope the books that Adam kindly donated help the kids in some way to further their education and fill their minds with great memories to cherish in the years ahead.

Thanks Adam for helping me give a little bit back to a wonderful place on earth that has educated me in life…… Hoo Don you blew it right at the end didn’t you. I’m going to squeeze all the ink out of your lemon slice….I couldn’t help it, he’s the top rabbit…..HD your blog rankings are going to slip after this one…..I just had to do it.