In 1987 a telephone call to a mobile cinema projection company was the start of a mysterious ghost story that years later would become the subject of a top Thai movie. The identity of the caller has never been known, but their request for a night of entertainment in the rural rice clad province of Udon Thani has since been left unexplained, and become one of Thailand’s great mysteries, and one of its most famous ghost stories.

Kamchanod forest is on a small island cut off by small waterways near the village of Wang Tong. The dense forest is reputed by most locals to be the underground kingdom of the mythical Phaya Naga (dragon).

The fireball breathing Naga is believed to lurk beneath the Mekong River in northeastern Thailand and appears at the end of the Buddhist Lent (during the eleventh lunar full moon in October) each year.

Every year thousands of Thais line the banks of the Mekong River in nearby Phon Phisai and Nong Khai, hoping to see the Phaya Naga shoot fireballs from the murky waters that divide Thailand and Laos.

The Phaya Naga Festival is one of the biggest yearly events in Northeast Thailand, and visitors come from all corners of the country in the hope of seeing the much-celebrated mythical dragon.

In 1987 a four-strong projectionist team arrived early evening on the island and set up their open-air cinema equipment in a clearing, exactly as the mysterious caller had requested.

As the 9 pm start time approached, no one had arrived, and minutes later the spools of the film started to roll to an empty venue. Later in the night, a large crowd of strange-looking country folk appeared out of the forest and silently assembled before the big screen.

The women were all dressed in white and stood on the right side, the men all swathed in black banded together on the left, nobody spoke a word. The production film reels continued to spin to a still and motionless crowd who watched throughout without any hint of emotion.

At four in the morning, the outdoor theatre finished and the crowd disappeared just as suddenly as they had arrived. The cinema crew packed up their equipment and headed back to Wang Tong.

The village was at the start of its day when the cinema crew appeared and set about questioning the villagers about the picture show. Those they asked knew nothing of the event, and nobody had heard the loudspeakers booming either. All four men realized their movies had been viewed by a large gathering of ghosts. 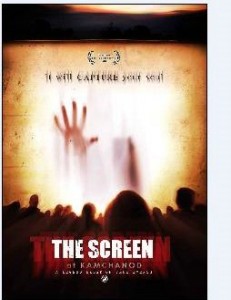 The Screen of Kamchanod is a ghost movie made in 2007 by Five Star Production (Thailand). Good, bad and downright ugly are words that best describe many of the reviews that I read on Director Songsak Mongkolthong’s horror movie. The plot involves a team of investigators who try to reconstruct the exact events of that spooky night in Udon Thani Province.

The four-strong investigation team is led by Dr Yuth (Achita Pramoj Na Ayudhya). The team travel from Bangkok to track down the same spools of film used by the cinema company projection team to re-enact the ghostly night. The exact location in Kamchanod forest is used to try and tempt the ghostly spirits into the open once again.

Dr Yuth, his girlfriend, and two Bangkok journalists are all hoping to uncover a major scoop. Not long after their arrival, the forest of Kamchanod unleashes its dark forces upon them all. The group stumbles from one catalogue of horrors to the next and their lives come under increasing danger.

In the reviews, the movie gets slated for its poor acting, loose plot and praised for some very scary moments and the charms of Thai actress Pakkramai Potranan, who plays Dr Yuth’s girlfriend.

Kamchanod forest can be viewed from Wungnakin Kamchanod Reserve, Wang Tong, near Ban Dung, Udon Thani Province, although, if you do, it’s recommended you leave before nightfall.