HD and the Swindon Mela Festival Sanskritis one of the 22 spoken Indian languages and dates back hundreds of years and is recognized as the classical Indian dialect. Mela is a Sanskrit word used to describe a religious or sports gathering and also a fair or fete. On a warm and sunny English day I took the chance to visit an all day celebration of Asian arts and culture in my hometown at the 7th Swindon Mela. Photograph on the right by kind permission of the Swindon Advertiser. 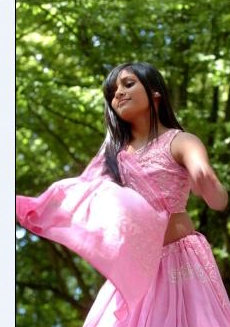 Swindon is like so many of Britain’s cities and towns in that it is home to many nationalities from around the globe with Asia providing a large portion of Swindon’s immigrant workers. Indian, Pakistani, Bangladeshi and also a small but growing number of Thai’s are now a part of this ex railway town and its expanding community.

Many of the younger members from Swindon’s ethnic groups are British born and the Mela is an occasion for them to sample their ancestors roots and witness culture that has been passed down from generation to generation and nowadays rejuvenation in the town’s annual festival which is one of 54 mela’s throughout Britain.

The Mela Festival is their chance to bring a little taste of Asia into the lives of those who can set apart a bhangra from a balti and educate those few who who think Asia is an offshoot of Asda and Bollywood is a thick, plastic coated formica board. With my ever unreliable Vivitar 8010 camera primed and ready I set off for the festival’s venue at the Town Gardens for the 7th Swindon Mela.

I arrived early but already the manicured landscaped Town Gardens had started to fill with a multiracial crowd all with the same expectation of enjoying some fun in the sun amongst a carnival filled atmosphere packed with a programme of cultural delight.

A fashion show, Bollywood dancing, cookery demonstrations and Gujrati folk dancing were just a very small part of the afternoon entertainment centred around three main stages. I had to make my mind up quick exactly where to start and after weighing up which early acts to later follow I plumped for a visit to the fenced area which housed an open air bar, habits die hard even amongst the loud Mela music and gastronomic delights from the numerous food stalls.

I nodded my way past the two burly security men stood at the entrance and made my way to the bar. Visions of Thailand came flooding back at the sight of bottled Tiger beer but soon faded after £3 (170 baht) was relieved from my sweat filled palm. I suddenly became conscious of being the solitary customer in the large caged area with hundreds of people milling around outside. I’m sure I saw a young Asian boy tug at his mother’s clothing, look up and say ‘ Mama, man have same beer papa like ‘ and the scolded reply hit me like a deep burning wound ‘You can look at the alcoholic later, soon the Maher Raas Group will be on the showcase stage…let’s go.’ I gulped back my beer and hurriedly left. 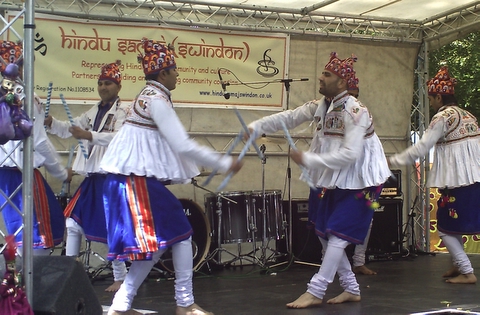 After a brief introduction from Swindon’s Mayor the Mela was officially open and by now couples and families were picnicking on the lawn around the Bandstand Stage basking in the warm July sun. I headed for the Showcase Stage to watch the Maheer Raas Group who had travelled down from Leicester to perform their blend of Indian folk dancing. 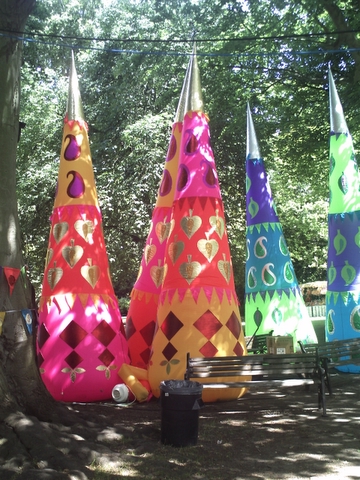 For those whose taste buds had been well and truly tickled by the festival’s pungent spicy aroma that filled the warm air there was plenty of choice on offer. Onion Bhajee, meat and vegtable samosa, chicken biryani, sheek kebab, the venue had a distinct fragrance of Far East markets and street stalls wafting through the Wiltshire air.

The garden’s lawns were brimming with happy eaters overindulging in some of South East Asia’s finest succulent snacks, with ever present queue’s at the Punjabi, Gujarati, Halal and many other variety of stalls. In the Activities Zone there was cookery demonstrations which included a samosa and roti class. There was something for everyone, leaving no excuse to depart the mela complaining of being famished and unfilled.

The Mela Festival did lack any real Thai presence aside from Thai massage offered in the Health Zone but the sundry of market and food stalls reminded me of the many fairs I have visited in Thailand. The event was well represented by its Indian roots with amongst the many acts the Jaipur Kawa Circus performing dance, puppetry and circus skills, Melody Arts performing Bollywood songs and Best Newcomer at the UK Asian Music AwardsDJ Jaz Dhami keeping up a regular beat of mixed music from the Main Stage.

The Town Gardens had to be cleared of all its delighted and sun kissed festival goers by 6-15 pm to make way for the evening showpiece the Bowl Concert. Bhangra singer songwriter Sukshinder Shindawas performing at the all ticket event and a large crowd was expected to hear the man who in 2008 was the winner of two UK Asian Music Awards for Best Album and Best Live Act.

By mid afternoon my Vivitar camera battery had given up the ghost and I was heading down the steep hill from from the festival’s venue in Swindon’s Old Town to my favourite watering hole The Merlin situated on more level ground. My thoughts had turned Asian and were filled with culture as I considered an evening at home with a packet of Chicken Tikka crisps and an Indiana Jones movie, I’d been truly bitten by the Mela bug.