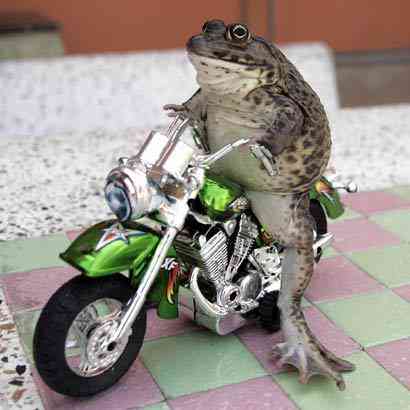 Some of the pleasures that derive from winning the big one in any countries national lottery are young chicks,  fast cars, flash motorbikes and beach holidays. All at once, they become finger click accessories. Harley Davidson’s, dumper trucks and Pattaya are all the toys of boys but Nong Oui the frog also wants the same despite being a girl.

The story of Nong Oui goes back to 2007 and Roi-Et Province in the Northeast of Thailand. Roi-Et translates to 101, and that is strangely coincidental in a story about a frog with a fantastic ability to predict Thai National Lottery winning numbers.

When Tongsai Boommrungsai a 52-year-old married woman from Roi-Et spotted a frog in her garden holding a young chick in its mouth, she stared straight into the frogs protruding eyes and demanded that the frog drop it. The frog obliged and from then onwards Nong Oui became part of the Boommrungsai family.

Nong Oui had a free hop of the house, and local villagers often dropped by to see her and Tongsai. When villagers started seeing numbers on the stretched skin of Nong Oui’s stomach, they placed money on the lottery and a legend was born. The lucky numbers were winning ones. Was it “Luck of the Irish”  Roi-Et style or just the plain fact that frogs are naturally spawny. The frog gave more Lottery winning tips, and the visitor numbers swelled even more.

For the next ten consecutive lottery draws Nong Oui produced winning two and three-digit numbers. Soon the Boommrungsai household was overrun with people and so to escape the amphibian’s ever-growing fan club, Tongsai took Nong Oui, his Harley Davidson toy motorbike and dumper truck, and fled to Pattaya. By now Nong Oui’s young chick had outgrown the frog’s mouthy ways and was happy to be left behind.

The last news I could track down of Nong Oui was in Pattaya in January 2008. A press quote from Tongsai stated that as soon as all the fuss had died down she and Nong Oui would be returning to her husband and their Roi-Et village home. There was no mention about the young chick waiting for the return of the ‘fowl-mouthed’ frog.

Let’s hope they are now all living as one big happy family and not struggling in poverty with only a meagre supply of rice and les cuisses de grenouilles in the freezer.

For once Beyond The Mango Juice applies simple logic and with a Roi-Et 101 connection offers these numbers for all future two-digit Thai National Lottery draws. Please remember that if you do use these lottery tips, only place money that you can afford to lose. Good luck.