Village Noodles is the final part of my three post series about working life in Thailand. Pattaya Bar Girl and Isaan Hotel being the first two stories which have both received a lot of positive reviews. This final part of the series is set in a rural village which is very familiar to me as it is the home and birthplace of my girlfriend Wonderful Wi. Ban Norn Chad is located 40 kilometres from Nong Khai and about 65 clicks from Udon Thani city in an area awash with rice fields where the sun beats fierce and work is scarce.

This story is of a lady who has moved her life and belongings from the mountains of Muang Loei and bought a 50% share of land on which she now lives in an old wood stilted house to be nearer her family. After years of hard work in the mountainous province and her latter years spent working in Bangkok this year was the time to return to her roots. Thailand At Work – Village Noodles, cooking a dream.

Sawn is Wi’s aunt and I know her quite well having met her a couple of times in the past. She’s quiet but bubbly and a pleasant lady who is excellent company to be around although her English is a non starter from the language blocks but then again why should it be. Sawn is divorced with two grown up children and unlike many other elders here she receives no financial support from her offspring, hardly surprising now they have their own families to care for.

After working for many years in Muang Loei, Sawn headed south to Bangkok and worked for three years in a factory producing flower pots. Working hard and making full use of the overtime available Sawn saved enough money to buy a half share in Wi’s mother’s land and ownership of the house on it. 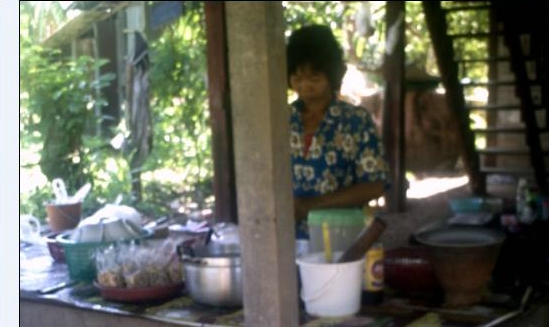 In January this year Sawn moved to Ban Norn Chad with thoughts of living in harmony amongst her family and earning money selling food from her new home. A bowl of noodles and a plate of red hot papaya pok pok sets you back ten baht each, cheap food and a two piece menu, so how does she make it pay. Sawn does but  in very small amounts.

Nowadays earning a crust by baking one is hard enough in our recession hit world but in a village where good times and hard times are separated by a small fistful of baht, eking out a living is always difficult no matter the state of the dollar or level of yen.

A ten hour working day will earn Sawn on average around 200 – 250 baht but after taking out costs her profit is slightly over half of that. An average month sees the ex Muang Loei mountain girl coin between 3000 – 4000 baht profit, a distant cry from the 9000 baht she regularly earned in Bangkok. Long hours and little reward for Sawn who despite her years of hard graft still retains a youthful look for someone not too many sunsets off fifty. On a tight budget the party nights will have to be put on hold. 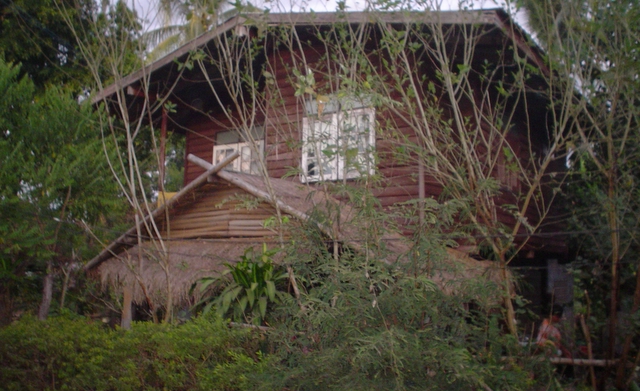 Dreams…we’ve all got them it’s just that some peoples are much simpler than others. Sawn’s house (pictured above) was built 25 years ago and is in need of renovation. Its wooden structure creaks, the tin roof leaks and a mountain sized pile of shredded papaya is needed to put it right. The cost of building the brick structured downstairs living quarters that she so desires will be around 100,000 baht, oodles of noodles and a few villagers will have to be enticed to turning their curves into fat.

In recent months Sawn’s frustration over her low income has grown and she has hinted at returning to her former work in Bangkok. Her day sometimes starts at 7 am with a three kilometre trip to the market in the nearby town and finishes early evening, a three dollar day and no headway to realising her simple dream. Sawn tried mixing the menu but had to submit to the villagers wish for a ten baht dish that’s cheap, plain and simple. The only carte seen in this village has a buffalo pulling it along.

Each day the ever smiling Sawn can be found under her wooden structured house serving customers or more often patiently waiting for the next one. The weekends are busier and on the finish of school days a short flurry of kids add a little ring to the tills but for Sawn it’s never enough, the mountain girl is learning to take the rough with the tough.

The one table ‘restaurant’ is rarely full with takeaway being more the villagers way. Noodle cook, political guru and friend are some of the guises needed to turn a two piece menu into profitable ways. The long hours of Sawn’s day are spent waiting for the next ten baht order from a hungry customer with the promise of more and another brick in the wall. Good luck Sawn.

I interviewed Sawn during my village stay in May this year. In early June Sawn returned to Bangkok and her old employment at the flower pot factory. She is hoping to return to Ban Norn Chad sometime next year with enough money to start her house renovation and fund a more financially viable business plan.