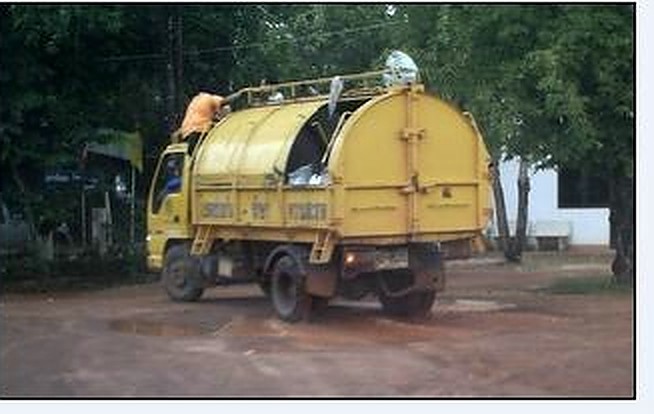 Some jobs in the world are much harder than others, but it is not just mentally or physically that differentiates easy or hard. The weather can turn a relatively easy task into a much more difficult or uncomfortable one. Thailand’s oppressive heat and high humidity make the work of the bin men a much more difficult chore.

High temperatures make the smell from the bins rancid long before the refuse man arrives. Also, the steamy humidity makes the heavy work a tiring and backbreaking day. The rubber bins are manufactured from recycled tyres and are a common sight outside village homes in Thailand.

The stench that emanates from the bins during the scorching summer months makes one good reason for new homes to get constructed as far back from the road as possible. It’s not only golfers that wish for a long drive. In the village where I spend part of my Thailand holidays, the yellow garbage truck often arrives with its back doors wide open and one the bin men perched there.

A three-person team operates the bin round with one driving, another collecting and I guess the newest or junior member of the team in the rear shovelling the garbage to the front. Gloves and a thin paper mask are his sole protection. A refreshing shower at the end of each working day must be bliss. The sanitation worker’s monthly water bill must be higher than most peoples. That takes me to the purpose of writing this post because I have a dustbin story of my own.

A Trip to Chachoengsao

The year was 1999, and I was on my second or third-ever trip to Thailand. Which one I can’t remember. My story centres around a village whose name I cannot recall. It was in Chachoengsao Province, about one and a half hours drive from Pattaya. I had attached myself to a Pattaya bar girl named Duan, and she asked me if I’d like to visit her village. Fascinated at the prospect, I  agreed immediately.

Being new to Thailand, I looked forward to the trip, and we agreed to stay at her sister’s house for three nights. On our arrival, Duan’s family greeted me like a long lost brother who had returned from war adorned with every medal that could be given. I quickly learned not to show my wallet openly.

The house itself was brick-built and very basic. Having lived all my life on an English council estate, I could do basic but what I saw was pushing even my standards to the limits. It was the bathroom that got me. I thought my hotel bathroom wasn’t up to much, but this was bad. I think even the spiders had left. There was a squat toilet, and I had a history of cruciate ligament damage to my left knee. Nothing too spicy, please.

Taking a shower involved dipping a small bowl into a large container of icy cold water and then pouring it over yourself. If Duan’s family had seen me in the bathroom nervously contemplating the initial pour, they’d have stripped me of all my medals. It was the nearest I have ever come to death. Even now I swear to god you could threaten to mug someone with a bowlful of that stuff. 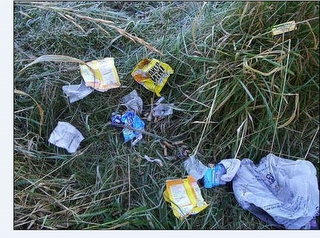 My days were spent relaxing and having a few beers; I was enjoying myself apart from one thing that continually annoyed me. The front garden didn’t have a fence, but you could make out the boundaries of the small plot of land. I would sit there for hours drinking beer and couldn’t help notice the litter that was strewn about everywhere. That’s what annoyed me. If you bought one of the kids some sweets or ice cream, they would eat the goodies and then just drop the wrapper where they were stood. Enough was enough.

I decided to extend my stay for a couple more weeks, and one day we took a trip into Chachoengsao. We returned later that day with me carrying a brand new plastic dustbin. It was education time. Over the next day, I paid a few of the local kids to tidy the litter in the garden. I instructed them to put the litter it in the bin. I also got through to them that any new wrappers, coke cans etc. had to be placed inside the amazing plastic thing. I can still remember now sitting in the front garden one hot afternoon drinking beer and admiring how clean it looked. Even the weeds had a much sharper tint. 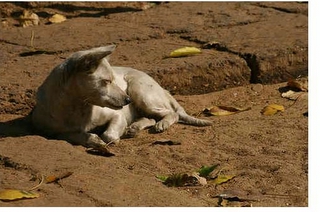 Each morning I would wake, go outside and find the bin was on its side with the contents scattered about everywhere. The Soi (street) dogs were getting at the bin in the night. No problem. From then on, before retiring to bed each night, I would place the bin inside the front door, safely away from the dogs.

A few days later I got up one morning, and the smell in the house was awesome. The bin was full and stank like crazy. I called Duan over and explained the next part of the education program. The bin needed to be emptied.