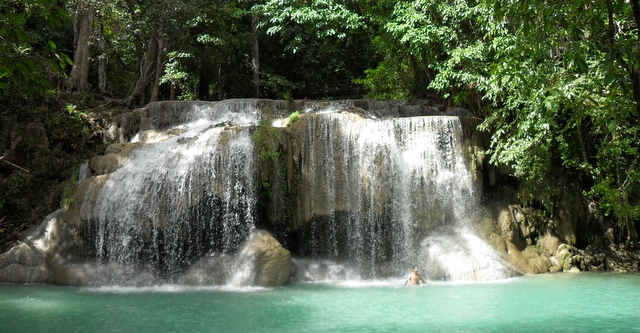 I am going to blow this post out of the water straight from the start. Wonderful Wi and myself got to three steps from heaven then called it a day. Erawan Waterfall in Kanchanaburi has seven tiers but unlike Sir Ranulph Fiennes who failed in his first two attempts to climb Mount Everest due to a heart attack on his first expedition, and exhaustion forcing him to quit on the second before his successful third climb, our failure was more for reasons of supply.

Smoke and chillis to be precise. My cigarettes were running low and the young one needed her daily dose of som tum, so having reached the fourth tier we headed back to base camp satisfied we had enjoyed one of the more picturesque places we were ever likely to see on this earth.

Erawan National Park comprises 550 sq. km. of rugged land and I had 10 cigarettes to cover it. It was going to be a tough day and the blazing hot sun kind of winked to force its way into the equation.

The Erawan National Park waterfall is the biggest draw for tourists, both foreign and Thai. From the waterfall’s bottom to its seventh level is a total of 1500 metres, and our tour guide who was taking us to level one set off at a brisk pace which left us lagging a fair way behind. If I’d had a decent cigarette lighter we might of kept up.

Since becoming Thailand’s 12th national park 34 years ago Erawan Waterfall has seen a well beaten path laid down by thousands of tourists who have visited here. A trail leads from the first tier up to the next to the last sixth level but from there a rock climb needs to be negotiated to reach the precipice. The rock formation on the uppermost tier resembles a figure from Hindu mythology and gives the waterfall its name. The three-headed Erawan Elephant greets those who make it.

Our tour guide warned us about the greeting we might receive on the second level and it wasn’t long before a sign reminded us so.‘BEWARE FIERCE MONKEYS‘, and sure enough they dropped down from the trees and stood before us.

In a scene that would no doubt have been left to rot on the floor of the Planet of the Apes movie editing room, Wilai kept the beasts at bay by trowing small stones with an awkward technique that only girls seem to use. Surely if they really were that fierce, they would have caught the stones and thrown them back.

Slowly but surely I made my move. 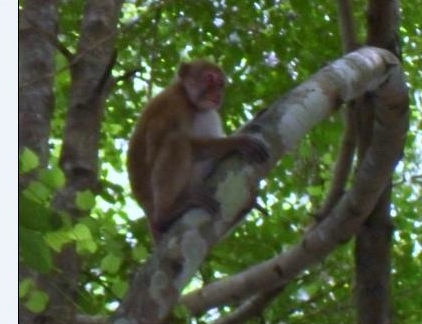 I approached one of the savage primates and clicking away with my camera cautiously narrowed the gap between the two of us. Wilai watched my back with a handful of small stones and a throwing action similar to a ladyboy chucking confetti at a high society wedding.

The white-handed gibbon (photo right) sat in the tree was a real cool dude. I think the park warden had dipped his bananas in Valium and Prozac because he was super cool and didn’t even bother to wink or blink an eyelid. I left him to it.

We saw many species of birds but failed to spot any of the other animals and reptiles the national park has, although our trek only covered a relatively small area. Elephants, tigers, squirrels, the dreaded king cobra and banded kraits all inhabit the park’s forestry and surround. I was happy not to have come across those last two.

The forest wrapped around the four steps of the waterfall we saw like an oyster shell protecting its precious pearl. The view on each level was so beautiful I forced myself to place each stubbed out cigarette butt back into my depleted cigarette packet. I have visited national parks in Thailand before and marveled at each, but this was the most striking and memorable I had seen. 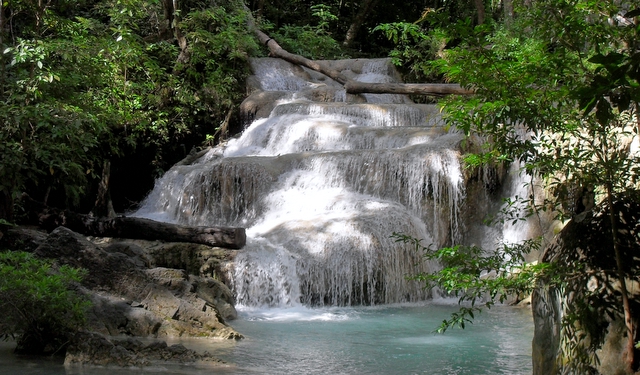 We were both awe struck by the water’s clear crystal blue glaze and the the loud sound of falling water, yet somehow there was a stillness in the air.  Wilai stared enviously at the fish swimming in their seemingly perfect world whilst I fought back the urge to strip to the waist and wade into the glistening spring and shout, ‘Has anyone got a spare cigarette because I’m down to my last two.’  I stopped short, fearing my echo would turn the Blue Lagoon a nicotine brown.

We didn’t climb the last three steps to heaven but it was still a memorable day. Unfortunately for us, a lack of cigarettes and an Isaan girl’s hunger for som tum got in our way.

Our tour to the Erawan Waterfall was 750 baht per person and was a double package with an added bonus. The tour included a ride on Thailand’s famous Death Railway but en route there our tour guide announced that four of the other minibus passengers had booked an hour’s ride at Wang Pho Elephant Camp .

Wang Pho also turned out to be our boarding station for our Thai-Burma Death Railway ride but prior to that memorable train journey I was kindly invited to take photographs of the elephants bathing in the River Kwai Noi. I will post about  that experience at a later date.

The thing I most liked about our visit to Erawan Waterfall was that by stopping short just three steps from heaven, we have given ourselves a very good reason to go back again.