Mama’s Kitchen – Warts and All

If you have recently lost a penknife, letter opener, scissors or even your favourite plastic shopping bag then there is a very good chance I might know where it is.

So there I was, staring down at kebab and french fries, absolutely Hank Marvin (starving). I grabbed some tomato sauce, salt, I love lots of salt on some of my foods and then went back to get my knife and fork from the kitchen.

‘Wilai I can’t find my knife. Your bloody mama has been at it again.’

Domestos the household cleaning bleach supplier ran an advertising campaign which featured the words Domestos – Millions of Germs Will Die, well the ones that didn’t I may have discovered their whereabouts. Mama’s Kitchen – Warts and All.

A fragmentation grenade is pretty deadly and I don’t know their cost but as sure as french fries are chips I’d like to roll a couple into mama’s kitchen and take what domestos left behind straight out. It all started about four and a half years ago. 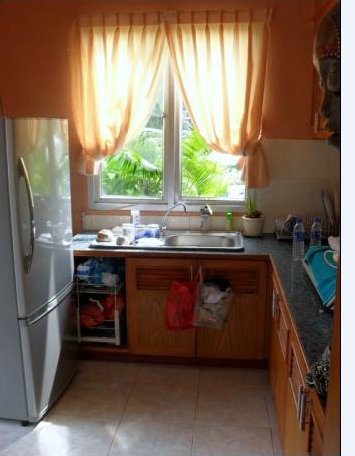 Our village home was built and we had included in the plans a small but nonetheless fairly modern kitchen. There wasn’t an oven just a two ring gas cooking stove but nowadays there is a microwave, food blender, electric barbecue cooking plate, state of the art refrigerator and even a toasted sandwich maker. I wouldn’t expect mama to use them all but at least some. She rarely makes use of the kitchen at all.

I rise very early each morning and after the completion of our village home I would wake up and immediately go outside for a smoke and find Wonderful Wi’s mama bent over her cooking pot conjuring up another culinary surprise to deliver to the village Wat (temple).

What the hell went into that pot I don’t want to ever know but she certainly didn’t buy any of the main ingredients….she found them. The insects don’t crawl through our garden they run like crazy. The last snake I saw was wearing a lucky charm amulet and carrying a leather bound bible. The life of a village monk sure ain’t fun. Not at meal times anyhow.

A couple of years on and nothing had changed when young Wilai decided that the house needed a car port. I thought it a strange decision because we didn’t have a car. I think it was a mildly expensive way of letting me know that one day I would be buying one although Wi has since refused my offer to do so. Mama seized the moment and moved her kitchen into the car port. Within days I was told it resembled a junkyard. On my visit one month later the junkyard had downgraded to complete tip and I had a few quiet words with Wilai. 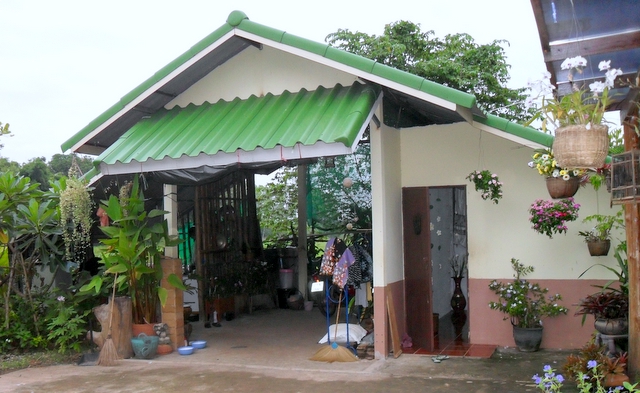 Moving the story on to last year and Wi once again got the builders in and as you can see in the above photo had another room built onto the side of the car port. This was mama’s very own kitchen. A great idea from Wilai. Mama refused to use it or very occasionally at most. The car port was where she wanted to be.

I’m not sure who loves who most but a couple of months back Wilai got the builders in again. They constructed a small, roofed outhouse with bamboo walls on the left of the car port which you can just make out in the above photo. Mama’s new kitchen. Amazingly she moved in. Rusty lock, old stock and battered barrel. 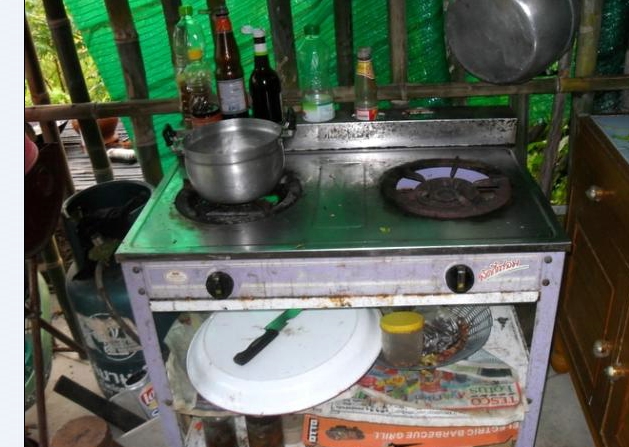 Now I don’t know how many gallons of domestos it would take to clean this kitchen but you’d need a high powered jet wash attached to complete the task. Even Lord Lucan would think twice about hiding in this place. The geckos that reside are outcasts and have bells around their necks. I honestly believe salmonella and escherichia coli would be eaten alive by far superior mutant strains.

In our modern kitchen mama uses the refrigerator, kettle, my cutlery and is often seen opening and shutting the cupboards in search of more freebies, but she never ever cooks. It really does confuse me as to why a lady in her late fifties who has juggled poverty for most of her life chooses to cook in a kitchen which has a thick film of grease rather than one that is relatively clean. It’s beyond me, way beyond.

Perhaps it’s the old ways that suit her best as change and modernization are frightening words to some people. Maybe it’s best this way because heaven knows what kind of state she would turn our kitchen into but I just wish she’d leave my bloody knives and forks alone. That’s mama for you.