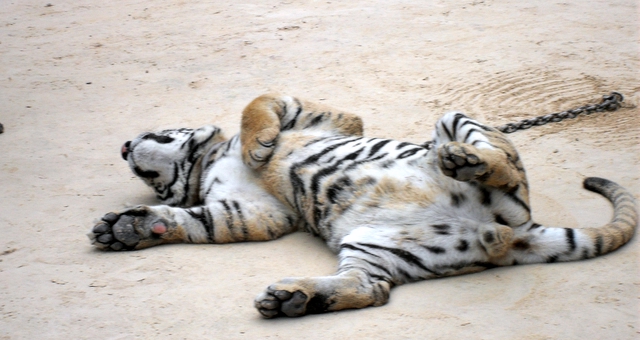 Tony the Tiger may have been into his early morning Kellogg’s Frostie’s but according to reports on the internet the cats I was going to see were more into Bob Hope and Bob Marley. Despite those ripe rumours I put my best foot carefully forward and with  a yellow and black striped bong in my pocket took a tour of the Tiger Temple in Kanchanaburi Province. 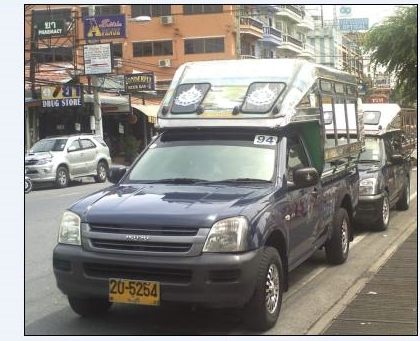 Wonderful Wi and myself booked a tour to the Tiger Temple at Wat Pa Luangta Bua Yannasampanno (Tiger Temple) which is about 30 kilometres outside of Kanchanaburi town. The cost was 120 baht each for transportation and a further 500 baht entrance fee on arrival for foreigners and 300 baht for Thai nationals, both of which included a decent brochure which gave a good background history of the wildlife sanctuary.

The previous three days of our stay in Kanchanaburi had seen weather which followed a familiar pattern. During the day hot sunshine beat down and at night the heavens opened and rain lashed the near empty streets. Our morning had been the same as the first three with the sun burning bright but minutes before our afternoon pick up the skies darkened and rainfall looked imminent.

At just after 2pm a songthaew (example pictured above right) pulled up. The side rain flaps were raised and sat inside were two young European ladies with jackets on that said they had viewed the afternoon weather report. We were both clad in t-shirt and shorts. For thirty kilometres the two of us got absolutely drenched.

The Tiger Temple in Kanchanaburi 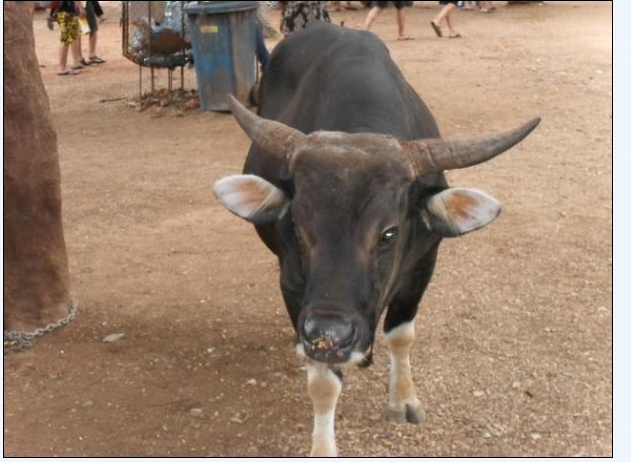 Wat Pa Luangta Bua Yannasampanno is a wildlife sanctuary and started out when an injured jungle wildfowl was given to the temple’s monks by local villagers. Soon after wild boar and deers were moved in. Horses, buffalo, cows and goats followed and today these species can all be seen roaming freely around the sanctuary grounds.

In 1999 an abandoned tiger cub found near the Thai-Burmese border was given to the monastery but the cub was in very poor health and soon after died. Weeks later two healthy male cubs were donated to the grounds having been retrieved from border poachers who had shot the young cubs mother and the Tiger Temple was born. Over the coming months border police handed over two more male tiger cubs followed by four female cubs and years later the fully grown tigers started to reproduce little ones of their own.

We arrived and were greeted by the sight of about 150 – 200 people, mainly falang, waiting for the gates to open and enter the sanctuary. We walked about 1000 metres to the Tiger Canyon where the tigers are taken for their afternoon exercise and photo shoot. Exercise could be termed a loose word as the tigers were all on a two metre chain fixed to the ground but the camera flashbulbs probably helped them work up a sweat. They all looked lively enough to me, not drugged just a bit snoozy. 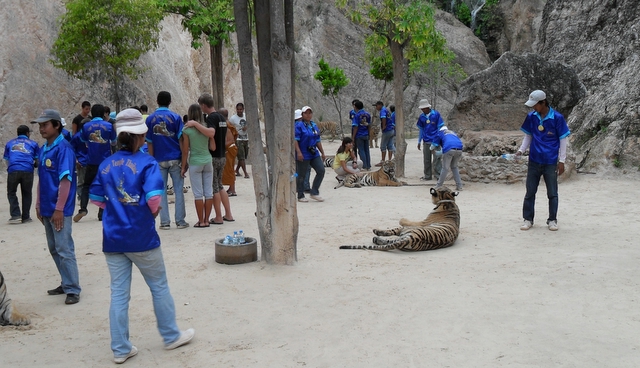 The Tiger Temple has many falang volunteers working there and they were very prominent in the push to relieve the tourists of their holiday baht. Our entrance fee allowed us into the cordoned off area where the tigers were ‘exercising’ and you could have your photo taken by one of the Thai workers, albeit with your own camera. 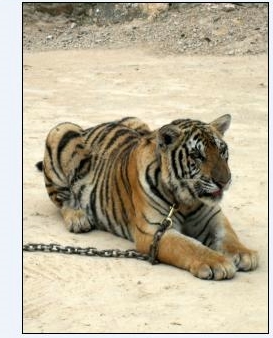 A couple of the volunteers stood outside the ropes and in very good English let everyone know that group photographs of between two and five people could be taken for a charge of 1000 baht. A large queue soon grew but at that inflated price I wasn’t going to step in it.

The photo shoot ended suddenly when one of the English-speaking volunteers declared there would be no more pictures taken as the tigers had to be walked back through the canyon to their resting area. Perhaps the proteins, vitamins and iron from the tigers morning red meat brunch were starting to wear off. Like a flock of sheep (bad word with tigers about) we all sheepishly trudged off on the half kilometre trek to our next port of call. The Three Tiger Falls.

My real disappointment with the Tiger Temple was the free brochure presented on entry. The content was excellent and very well written. It was without doubt the best informative brochure I had ever come across in Thailand but it had certain content that smacked of commercialism and profit.

Two of the eight pages from the brochure were dedicated to asking for donations or subscriptions to a monthly magazine and added to the extortionate price for a group photo I thought it was all a bit too much. The temple and its wildlife sanctuary are a very worthy cause but the evidence that I saw pointed to the entrance fee making enough money to call for a more structured and less ‘in your face’ commercial campaign. Enough said, because overall my verdict on the tigers so far was that there was no sign of heavy sedation or any drugs involved at all. 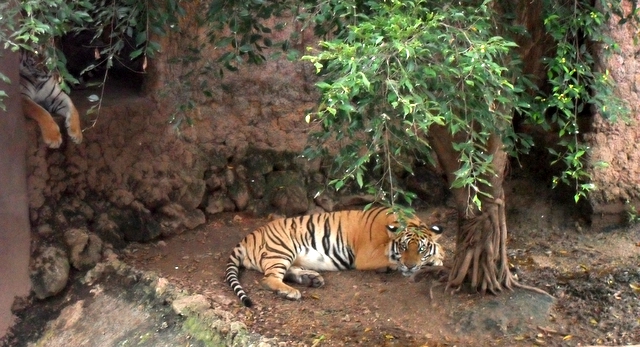 The Tiger Falls was a man-made quarried pit which was home to three tigers housed in a more natural living habitat. What struck me about the Three Tiger Falls was the giant cats spent the whole time sleeping and were the least active beasts we saw all afternoon. They were enclosed with no public access and this led me to think that the drug rumours surrounding the sanctuary were very much a myth. The Tiger Temple brochure explains more.

Why are the tigers so calm? Are they drugged?

All of our tigers have been hand raised and imprinted to humans and therefore have no fear of people. The ‘fierce’ behaviour often associated with captive tigers is caused by placing wild animals in stressful conditions of the captive environment. Our tigers have been regularly handled from a very early age and thus become desensitized to being touched by people. This is why they are able to sleep while people sit next to them for photos. 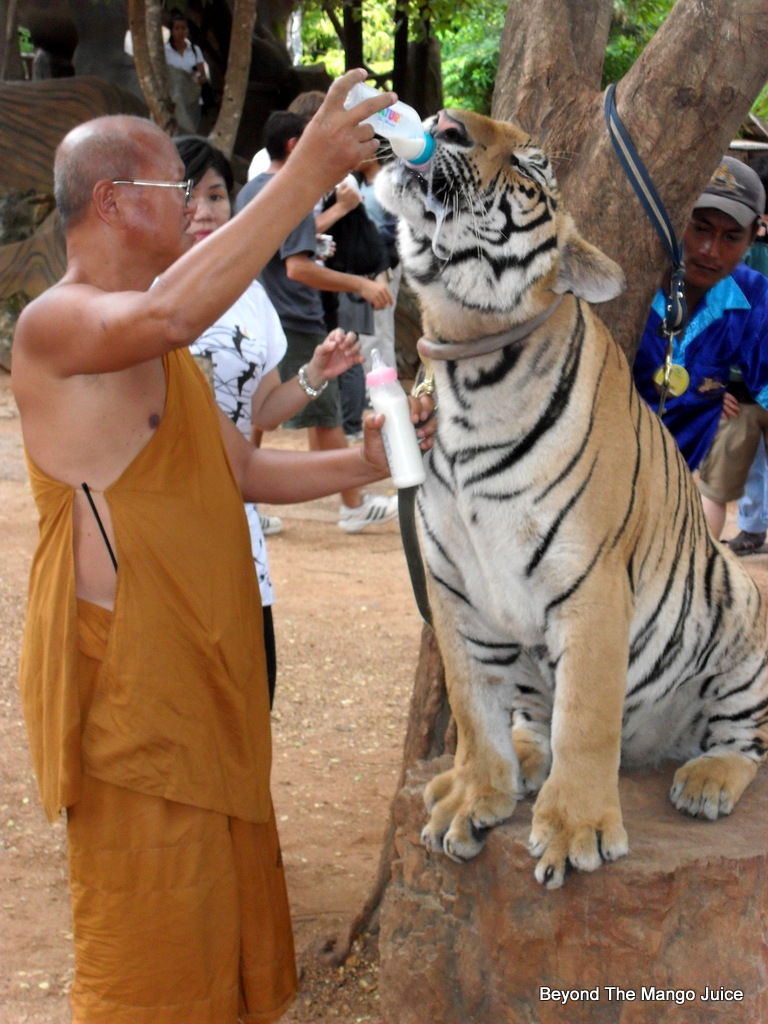 After the Three Tiger Falls a short walk took us to another tiger photo shoot but this time it was played out in a very relaxed and commercial free way. Buddhist monks led out some of the younger tigers (not cubs) and excited tourists posed for pictures with the magnificent beasts, and plenty including myself took up the ‘chance’. The best part of the afternoon for me was seeing one of the monks bottle feed milk to a very alert and appreciative tiger.

This was where our two-hour tour finished and I felt a little more time would have been better value. On our five-minute walk to the exit gate we passed the Meditation Training Centre where the forest monastery offers accommodation for those wishing to learn meditation techniques. The Tiger Temple offers something for everyone.

Having dried out from our earlier drenching Wilai and myself boarded the songthaew for our return trip to Kanchanaburi. I left with the feeling that the afternoon had been an exciting experience but one I probably wouldn’t want to see again. Perhaps a case of ‘not bitten but twice shy’.

Within five minutes of hitting the Kanchanaburi highway the skies opened once again and at our dropping point next to the Bridge Over the River Kwai we squelched our way onto one of the river raft restaurants. Minutes later we glanced up to see a train start its journey over the bridge and take its passengers on a journey along the Death Railway. That made me realize realise our soaking skin was no discomfort at all. The sad and historic Death Railway is a route I had previously taken and one I will not forget.