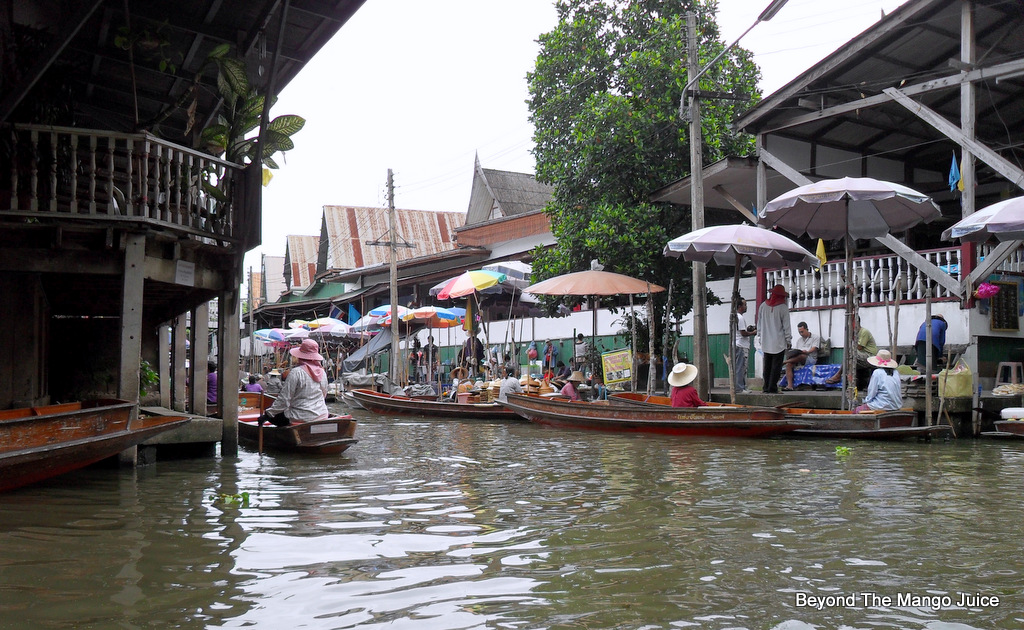 Bangkok’s famous floating market is not actually in the capital city but can be found swimming in a sea of colours in Damnoen Saduak, Ratchaburi Province, 80 kilometres west of Bangkok.

In the mid-nineteenth century King Rama IV connected the Mae Klong and Tacheen rivers by constructing 30 km of canal waterways to create a transport and trade annexe for two neighbouring provinces. Nowadays nearly 150 years on Damnoen Saduak Floating Market is not only one of the most popular tourist attractions in Thailand but also one known throughout the world. 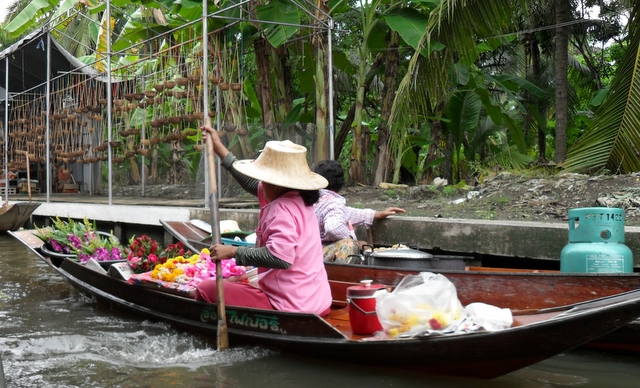 Wonderful Wi and I checked out of our Kanchanaburi guesthouse early morning and on our way to Suvarnabhumi airport our taxi stopped off at Damnoen Saduak and we enjoyed a long tail boat ride to the vibrant water market. Our total cost which included over three hours of taxi travel and a one hour boat ride was just 2500 baht ( $70 ). Be warned because if you seem greener than the murky canal water, tour operators will charge you 1000 baht for an hour long-boat ride because the fee to less unscrupulous operators is only 100 – 300 baht. 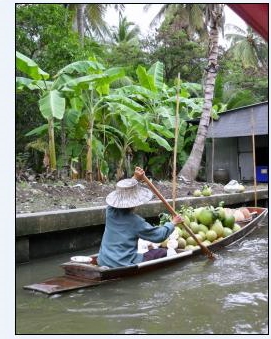 How do you describe somewhere that has had so many complimentary things written about it before. You remind yourself of the vivid bright colours, fresh inviting fruits and happy smiling vendors, then grab a pen and sprawl.

Long before the Honda’s and Toyota’s of the motor world spat their fumes into Thailand’s skies, canals and rivers were the major travel, transportation and trade routes in Thailand. Paddle boats shipped fruit, vegetables, rice, spices, small livestock and many handcrafted goods to sell on the banks of the small villages and the markets of the spawning towns dotted along the waterways.

The old wooden houses that still line the banks of the Damnoen Saduak canal look down on a canvas of dank green water and bobbing boats filled with the rich and contrasting colours of their owners wares.

The market is an artist’s dream setting and a navigators worst nightmare as the boats clash at every port and call. If your boat sank in these waters you’d die of toxic poisoning long before you drowned. Shade, tint and hue have enriched many an artist’s canvas portraying the market in its most seductive light, but whatever might lie under the water it is in stark contradiction to the market’s intoxicating allure and a reminder of beauty being only skin deep.

Wi’s temptation to fill our long tail boat full with flowers, fruit and vegetables was thwarted by our looming afternoon flight. If your temptation proves too much then leave a little room for some of the many other things the market has on display. If you need a souvenir or two look no further. From hand carved figurines to clothes and hot coffee, to ice cool beer, the floating market is a refreshing change and a unique experience. 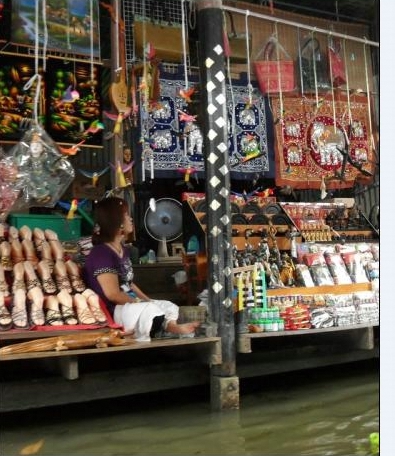 The narrow canal waters were crowded with vendors and tour boats making clear photographic shots very hit and miss. I have seen some quite spectacular photographs of Damnoen Saduak Floating Market on the internet and I now know most of those were snapped looking down from the canal sidewalks. That’s the place you need to be if you’re after some good photographs .

On both sides of the canal rich fertile farmland gives many of the market vendors the source for the produce they sell.  Bananas, oranges and watermelons are just a few of the fruits that give the market its wonderful span of colours and the image which is imprinted on so many people’s minds around the world. A floating market swathed in bright beautiful colours gently bobbing along.

The market has operated since 1967 and of the millions of people who have passed through here there could have been very few who have left unimpressed. On our boat ride we were never hassled into buying anything and we were greeted in the main by smiles. 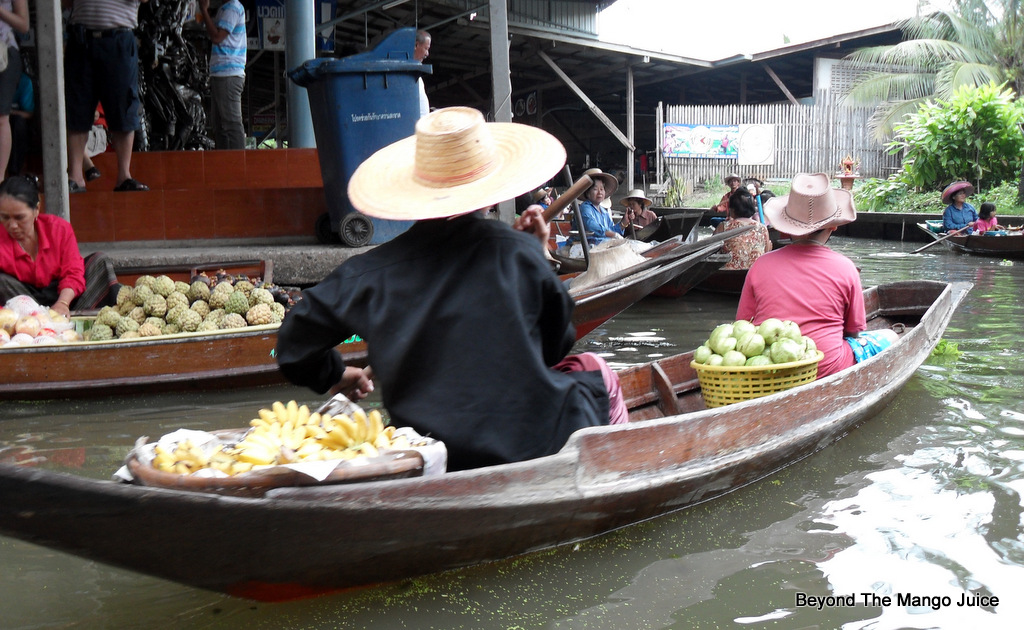 Our boatman did pull over at regular stops that were probably commission points for himself but the world has moved that way since the flower power days of the 1960’s. Flower power is today clearly evident on the market’s canals alongside colourful fruit and tourist bric-a-brac which these days has a very tight grip on the market stalls.

First time visitors to the market should remember it starts early morning and finishes around one hour before midday. I know Wilai and myself will be making an early morning date with the floating market at least one more time in the years ahead. Damnoen Saduak Floating Market is an absolutely wonderful experience. I’m just disappointed I couldn’t get the pictures to prove it.