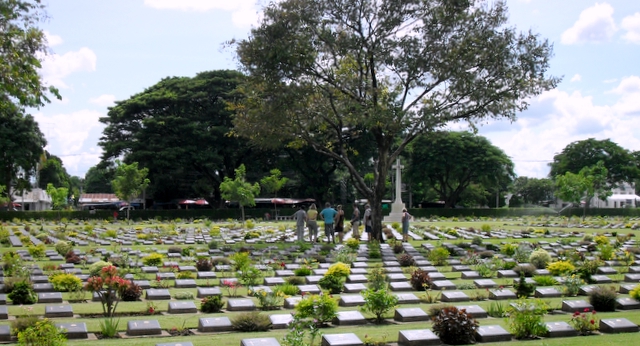 In the 50 previous years of my life I never once imagined I would stand before so many graves in a country so far from my homeland. The Kanchanaburi War Cemetery truly moved me.

There are 6,982 graves at the Don Rak War Cemetery in Kanchanaburi town, here rest the remains of those who died during the construction of the Thai – Burma Death Railway. Of those the names of 138 remain unknown.

Today is Remembrance Day which is also referred to as Poppy Day and Armistice Day. Remembrance Day is commemorated by the Commonwealth of Nations and pays tribute to the Commonwealth war dead. Of the 6,982 graves in the Don Rak War Cemetery over 3,500 are British and more than 1,300 Australian but lest not forget those outside of the Commonwealth. 1,896 Dutch prisoners of war lie under the soil in this peaceful and well manicured cemetery. There are many from other nations too.

The cemetery was designed by Colin St Clair Oakes and created by the Army Graves Service shortly after World War II on land donated by citizens of Kanchanaburi town. Nowadays the cemetery is supported by the Commonwealth War Graves Commission (CWGC). The CWGC is made up of six member states –  Australia, Canada, India, New Zealand, South Africa and the United Kingdom whose governments give grants to help fund a large proportion of the costs of maintaining approximately 2,500 war cemeteries and memorials around the world.

There are no headstones inside the Don Rak War Cemetery. Due to the heat, humidity and at times extreme rainfall, more weather resistant flat pedestal markers bear the names of the sons, brothers and husbands many of whom died early into their adult life. They perished in the jungle work camps and under a harsh, brutal work regime countless died toiling alongside their fellow prisoners. Their buried remains were retrieved from shallow graves under and alongside the railway track and brought to Kanchanaburi town. 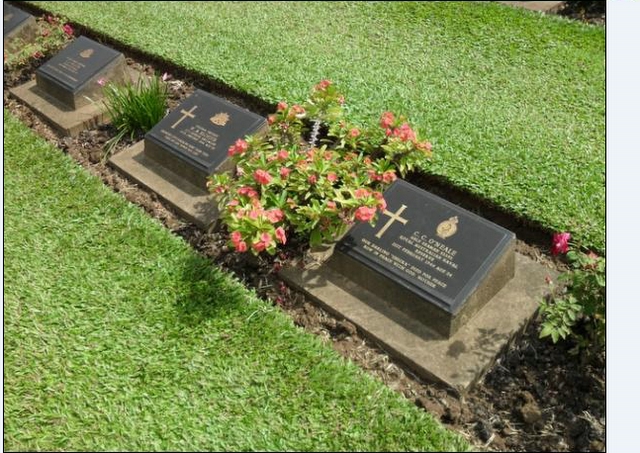 On a day such as today many younger people tend to think about Remembrance Day as a time to pay respect and give thought to those who died in battle and quite rightly so. There are however many hardy spirits resting in graves around the world, whose hearts should have kept ticking long after the declaration of peace if their captors had shown compassion instead of  using torturous, distressing and harrowing means.

Two graves in the cemetery hold the cremated remains of 300 prisoners who died from a cholera outbreak in 1943 at their Nieke prison camp. A bronze plaque over each grave bears the inscription ‘ HERE ARE BURIED THE ASHES OF THE 300 SOLDIERS WHOSE NAMES ARE INSCRIBED IN THE MEMORIAL BUILDING IN THIS CEMETERY.’ The plaque is inscribed in bold capital for those very brave, bold men.

There were over 12,000 allied prisoners of war who died working on the Thailand – Burma Railway and they are buried in three cemeteries, Don Rak, Chungkai (Kanchanaburi) and Thanbyuzayat (Myanmar), each one is supported by the Commonwealth War Graves Commission. To close my post I would like to honour those brave souls and the estimated 80,000 – 100,000 Asian labourers who lost their lives working on the railroad by quoting an epitaph that is carved into a cemetery headstone in Kohima which is in the north eastern border state of Nagaland, India.

The epitaph is in memory of the British 2nd Division who fought the Japanese in the Battle of Kohima in 1944 during the Second World War. The words are attributed toJohn Maxwell Edmonds (1875-1958).

When You Go Home, Tell Them Of Us And Say,

For Your Tomorrow, We Gave Our Today.

Wherever you may be today, tomorrow or hereafter, touch, hold and cherish the fragrance of a single flower and through your silence remember those who gave their lives for our today.