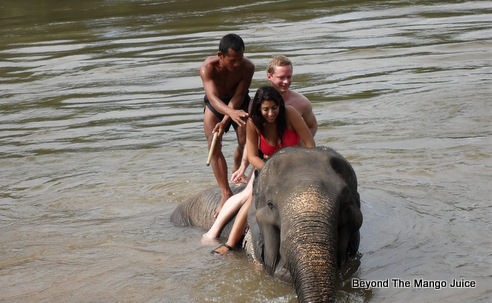 You may recall my post Three Steps To Heaven – Kanchanaburi’s Erawan Waterfall in which Wonderful Wi and I visited the beautiful seven tier Erawan Waterfall and later that day travelled on the Thai – Burma Death Railway. In between we had a surprise visit to the Wang Pho Elephant Camp and a chance to photograph the elephants bathing in the Kwai Noi River. The visit also ended with a ‘double bonus’ but I’ll get to that at the end of the post.

We were accompanied on our day tour by four other tourists whose nationalities now escape me apart from the lady shown in the top photo, she’s an Israeli national. We had selected our two stop tour package from a list of day excursions and wrongly assumed the other passengers would be joining us on the Death Railway ride.

After leaving the Erawan Waterfall our tour guide announced our next stop would be at the Wang Pho Elephant Camp where the others had booked an elephant trek and the opportunity to bathe with the elephants as well. From then on, Wilai and myself would take a trek of our own on the famous railroad while the others would be bussed back to Kanchanaburi. 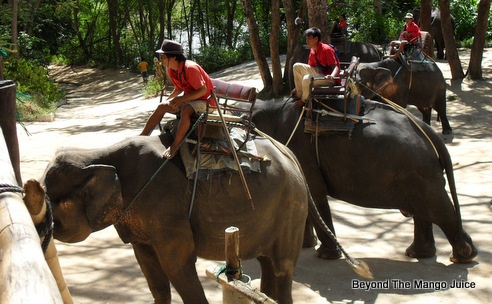 On their return from the elephant trek our guide asked me if I’d like to join the foursome and go down to the river to photograph the elephants bathing in the water. It was an offer I could hardly resist. Wilai being a little afraid of these magnificent mammals opted out preferring to stay on firmer ground.

Since returning to England my internet research on Wang Pho Elephant Camp has led me on an endless trail of sites which all seem to have the same word for word information. I have found very little background to the camp, merely that it was opened in December 2000 and is a source of income for hill tribesman who live in the Kanchanaburi area.

The camp had a look to it which suggested it had been established 20 years before its time. Its presentation was well lived in, but homely, and all expense spared. The short trail down to the river followed a well beaten track and after changing into more suitable river wear my four fellow tourists climbed atop the two elephants and each with a mahout on-board entered the mud tinged water.

At the mahouts command the elephants dipped their long trunks in the water and then arching them back sprayed the shrieking ladies and appreciative men. Another shouted command from the mahout and the farang were dunked into the river. They climbed back on but were thrown into the drink once again and the Kwai Noi River was sprayed with the sound of laughter and showered with water a drab shade of green and brown.

The problem for the playful quartet was their camera’s were safe in their backpacks, away from harm, but not able to capture a day in their lives they would never forget. I promised to drop a CD of my photos to their hotel the next day. How could I deny them memories of such an unforgettable adventure. If you love elephants and want to get real close to them then the Wang Pho Elephant Camp is a great place to do so.

I mentioned a ‘double bonus’ at the start of the post and luckily I managed to capture it on film. It is a photograph which proves that everything on a elephant really is big. Look at the jugs (ears) on this one.

I’m very tempted to try a Google search on Israel, wet jugs and beautiful creature. How about you. I know Malcolm from Retired In Thailand and Loving It might have something to add I’m sure. That’s one swell looking lady.