Khon Kaen – A Wedding And An Empty Fruit Bowl 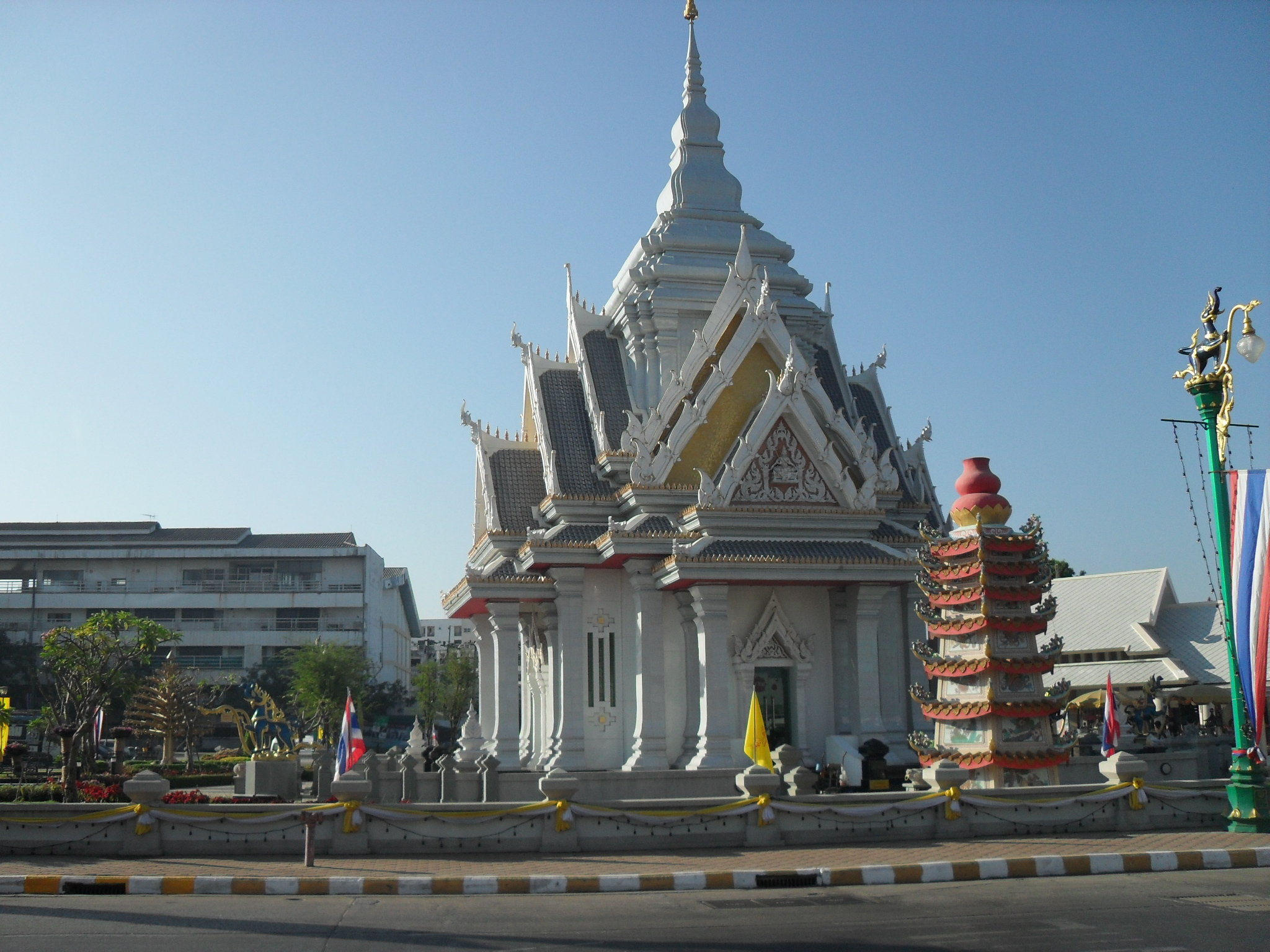 Khon Kaen is never going to make the world’s big fruit bowl. The Big Apple it isn’t, and the Big Mango it ain’t. Isn’t, and ain’t, kind of sum up Khon Kaen to me. What New York and Bangkok serves up in big chunks, Khon Kaen offers in smaller slices, but it isn’t ever, and ain’t never, going to make Thailand’s big party fruit bowl.

Khon Kaen has two bus stations, non air and air con. My plan was simple. Wonderful Wi would check in to one of the city’s hotels mid afternoon, and my VIP coach from Suvarnabhumi airport would arrive at Khon Kaen’s air con bus terminal in the early hours the next morning. Wilai would meet me there. Wilai waited at the non air bus station from 2-30 am, my bus arrived at the air con one 45 minutes later, eventually we met.

The Bussarakam Hotel was a typical provincial city hotel. It was neat and tidy, with a breakfast buffet more suited to evening time. The hotel had a decent bar/restaurant, and our was room was 900 baht a night. 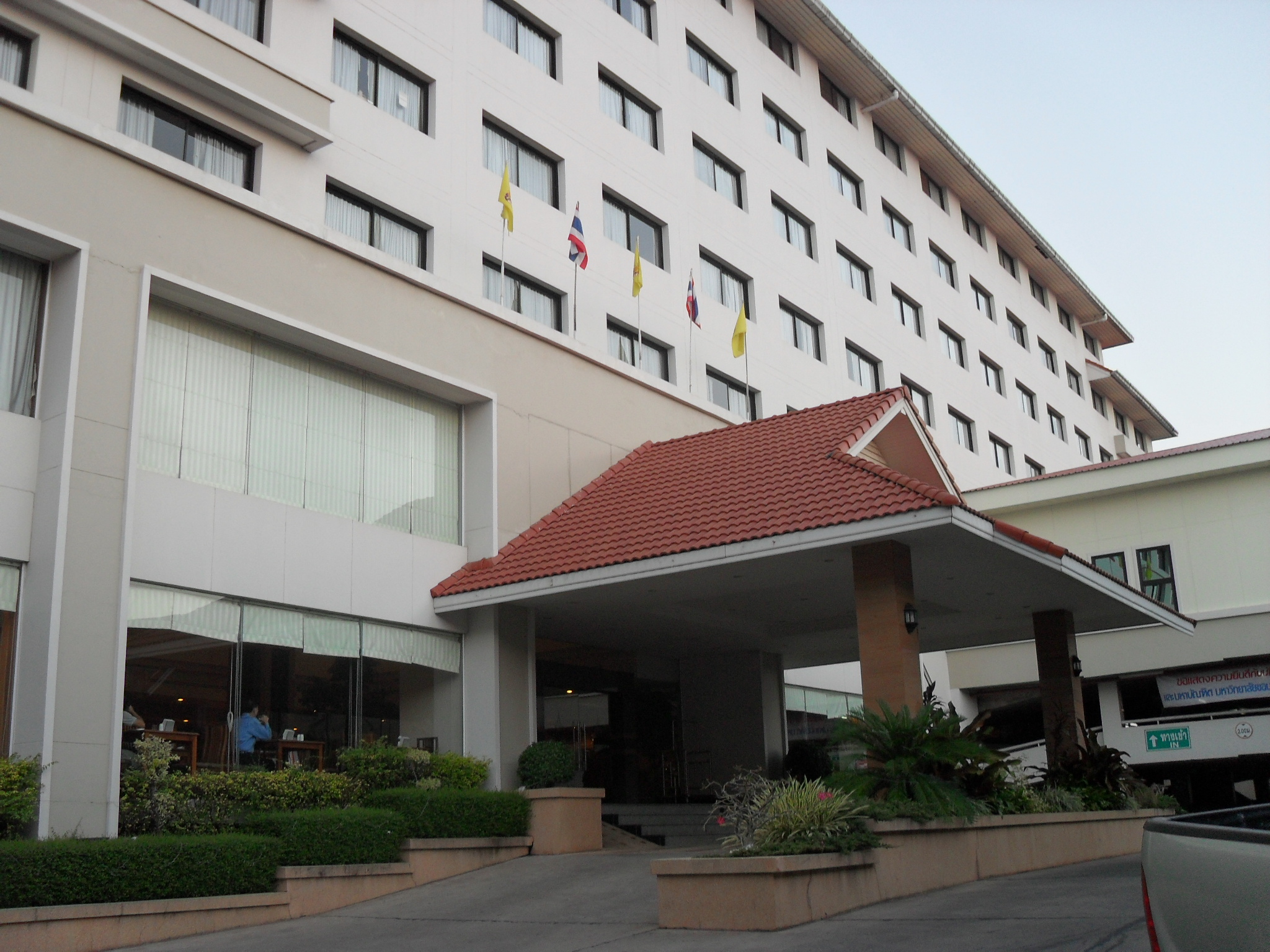 I’d phoned Wi from Suvarnabhumi and she’d told me the name of the hotel we’d be staying, she’d also explained the Bussarakam Hotel was near full. Khon Kaen University was having its graduation day and apparently the hotel was booked full with Thais.

The thought of young, fit, nubile female graduates lounging around the hotel had made my six hour journey to Khon Kaen  pass a lot quicker. Wilai had insisted on chaperoning me from the bus station to the hotel… what mischief could I get up to at half three in the morning… then again, perhaps she was just looking forward to seeing me. I was glad to see her too, but the thought seeing young, sexy university girls, had me pretty excited too.

Unfortunately, the hotel’s guests had more wrinkles than high cheekbones, their youth had sagged with Old Father Time. The university students parents and close family were staying at the hotel, but their fresh faced student daughters were nowhere to be seen. Never mind, I wasn’t in Khon Kaen to ogle young women, I had a wedding to attend. 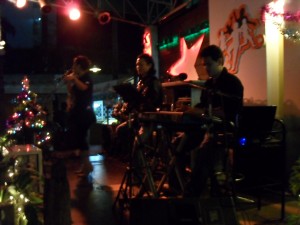 It’s difficult to judge a city in two and a half days, but what little I did see, didn’t really convince me it was my kind of place. Khon Kaen’s Central Plaza shopping mall was huge, and would even make a large dot on Bangkok’s map, but it seemed just too big for the city. Khon Kaen was ideal for shopping, but I’m more of a nightlife animal.

Those seeking nightlife might be a little disappointed too, or at least I was, there seemed very little of it about, and what there was, was too spread out. Maybe we just ventured into the quieter parts of the city.

Food in Thailand is quality no matter where you travel. Khon Kaen was no different. On both nights we visited a different restaurant. On the first night we enjoyed great food and a live band who played Sek Loso songs to perfection. On the second evening we ate at a restaurant on a giant lake, and the lemon chicken breast they served was absolutely delicious.

We were in Khon Kaen because my mate Dean was marrying Nuan, a rural girl from Roi- Et, which is a far bit east of Khon Kaen. Wilai and myself were the only guests, and Dean wisely chose to put a fair distance between the wedding ceremony and his future in-laws. A dowry is more easy to negotiate long distance, and over a phone. 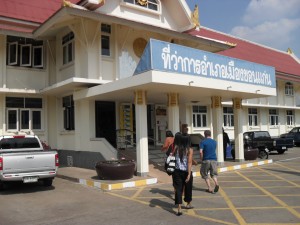 We all turned up at the local district office in one tuk tuk, not many wedding parties can say that. Inside it looked more like a place to cash travellers cheques than get hitched. The ceremony was more wham bam than confetti. A couple of clerks banged their rubber stamps and the show was over. It was the quickest wedding I’d ever seen. 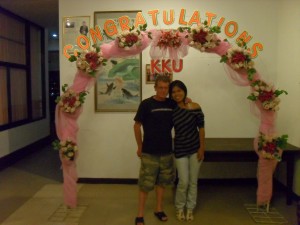 The four of us celebrated the matrimony at the lemon chicken restaurant that night. The bride and groom seemed very happy together. Dean is one loyal guy and I know Nuan has herself a very good husband. From the two days I spent with Nuan, I reckon Dean has grabbed himself one beautiful, loyal partner as well. I wish them the very best in what I hope is a long and happy partnership.

Our partnership with Khon Kaen ended very much as it had started. We took a mid morning tuk tuk to the air con bus station, but the next bus to Udon Thani was a long time away. Wilai then told the tuk tuk driver to take us to the non air terminal, and within minutes we were on our way to Udon Thani.

My overall impression of Khon Kaen, and it was formed over a very short stay, was that it really didn’t have enough active nightlife for me, and our visit was during the busy Christmas season. Despite that, Wilai and myself had an enjoyable time in the city and must explore it further one day.