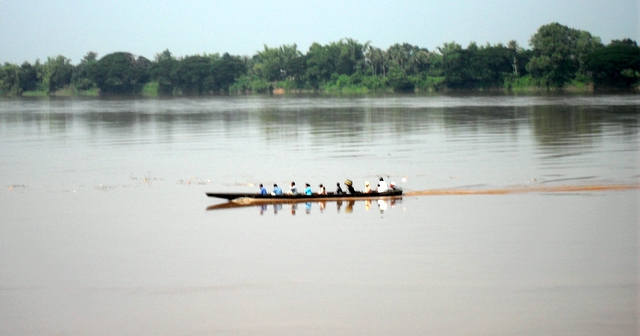 The Mekong River separates Thailand from Laos in the northeastern region of the country. Phon Phisai (โพนพิสัย ) is a small town nestled on the riverbank of the famous stretch of water. It’s a place I have visited many times before and each one of those trips has been to visit Phon Phisai’s busy day market alongside the Mekong River. 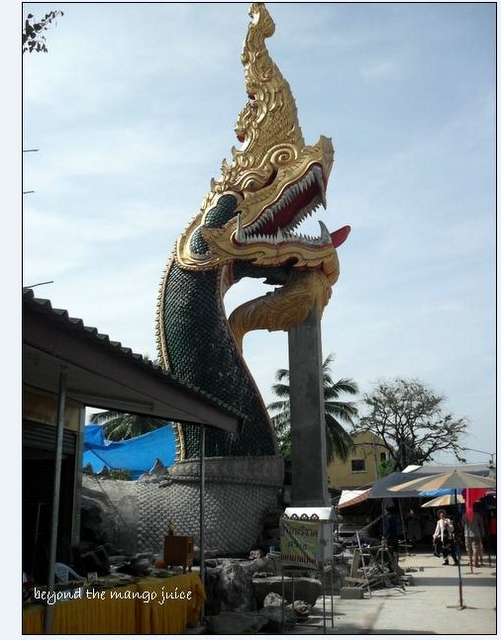 Phon Phisai has drawn the interest of Thai TV documentaries before concerning its Naga Fireball Festival. The festival is typically held around October each year at the end of Buddhist Lent. A mythological serpent (Phaya Naga) living in the depths of the Mekong River is said to shoot fireballs (bang fai) into the night skies to form steps for Lord Buddha to walk down from heaven.

The festival attracts massive crowds at Phon Phisai each year and is top of my must-do list in Thailand. Crowds at nearby Nong Khai are even bigger and reach hundreds of thousands for the duration of the festival. However, Phon Phisai is the place to be for your best chance of witnessing the fireball phenomenon.

In 2002, former Thai TV station ITV ran a documentary that made claims the Naga fireballs were a hoax. The TV documentary backed up its allegations with a film showing the fireballs were AK-47 tracer bullets fired from the other side of the Mekong in Laos.

The Thai nation reacted furiously to the documentary, so much so, that locals floated wreaths on the Mekong River in Nong Khai and flexed substantial financial demands toward ITV for the damage the TV programme had caused the province. Subsequently, ITV issued a public apology. At the time the now-defunct TV broadcaster was owned by ITV Public Limited Company which was a part of the Shin Corporation. 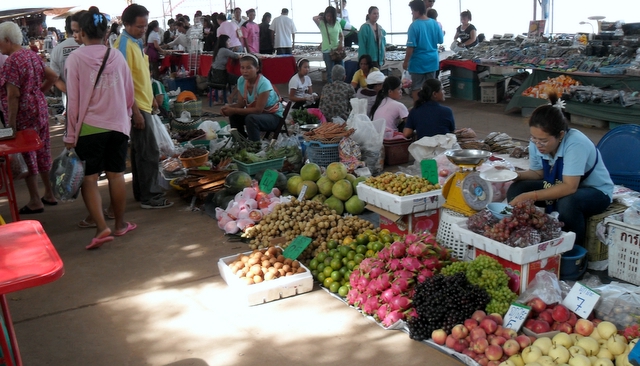 The market at Phon Phisai stretches along the promenade on the banks of the Mekong River and is a very busy concern. If you want fruit and vegetables, then bring a big bag because there’s plenty on display. Meat, fish and its dried variety are in abundance too. Bring a handkerchief as well, because the smell from the dried fish is overpowering.

Phon Phisai market stocks brand label clothes with designer logos, but their mock-up is too easy to spot. There’s plenty of second hands if that’s your wear. DVDs, clocks, knives and socks, the market has got the lot but for one noticeable thing, to me at least. Phon Phisai market lacks a smile. In my opinion, the Thasadej market in Nong Khai is similar too. Perhaps the Mekong River and the shadow of neighbouring Laos have that effect. 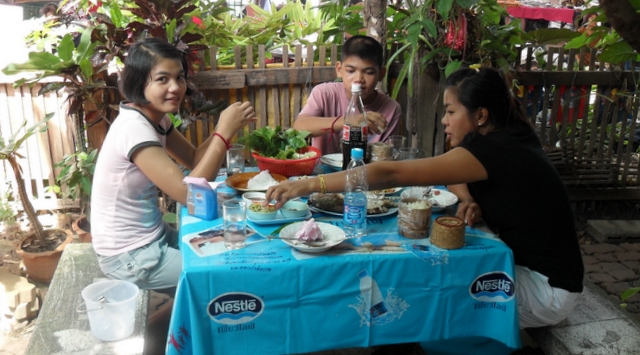 There is one thing at the market which is guaranteed to put a smile on the face of Wi and I. That’s our compulsory visit to one of the markets small fish restaurants and another chance for me to conjure a perfect miang kam. 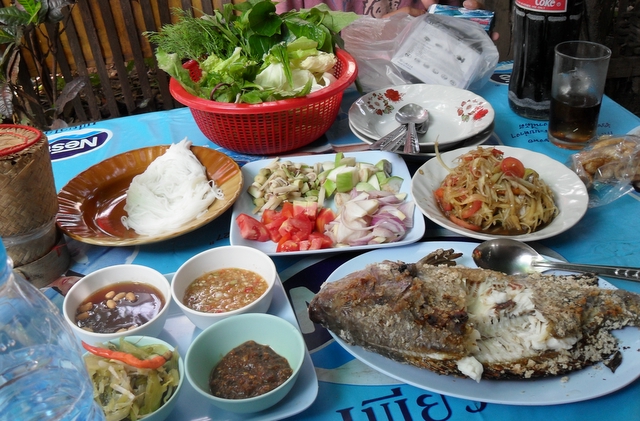 Miang Kam roughly translates as a wrapped bite or mouthful and is precisely that. The food pictured above is all the ingredients needed to make these lettuce-wrapped bundles. Here’s the list: fish, noodles, sweet and sour sauces, vegetables and the added bite of chilli peppers if that’s what you like. I love them, without the chilli, of course. As always in Isaan, sticky rice and som tum (spicy salad) are on the table. The food in the photo above cost 150 baht. The bottle of coke was extra. 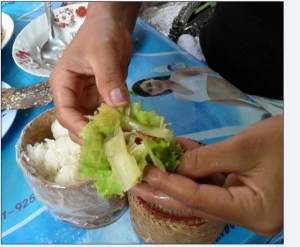 To make the perfect miang kam or pan miang as it’s sometimes called you take a lettuce leaf and then place some delicious white fish meat onto it. Next, put some noodles on top and add tomato, shallots, ginger, mint and perhaps a sliver of chilli pepper. Top off the filling with a sauce, my choice being a sweet syrup with peanuts and then fold the leaf into a wrap and pop the whole bundle into your mouth. A miang kam is simple to make and delicious.

I don’t know why the majority of people in Phon Phisai lack a smile; well perhaps there’s a trace of one sometimes, it is Thailand after all. However, the town and market are still well worth a look.

Book Early to See the Fireballs

If you are planning a visit to Phon Phisai for the Naga Festival, then book your hotel early. Rates at the Boontawee Hotel and Suan NV Resort are both quoted at 250-350 baht and are subject to price change. During the Naga Festival, room rates would be considerably higher. They have 17 and 9 rooms respectively so you’d probably be better off booking into a hotel in Udon Thani or Nong Khai.

One day I will make it to the Naga Festival, and a hotel won’t be needed as our village home is only about 35 kilometres from Phon Phisai. Miang Kam in the morning and fireballs at night sounds perfect. I’ll just have to keep a lookout for those tracer bullets.