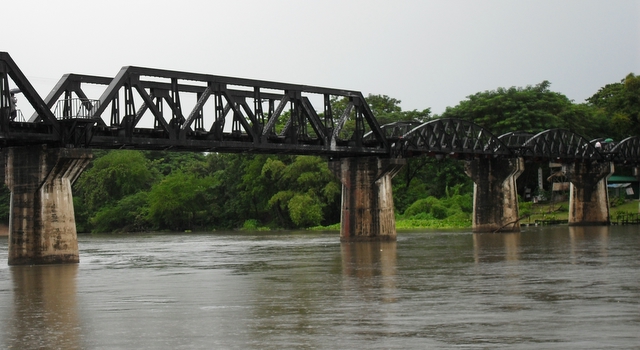 The movie The Bridge on the River Kwai (1957) starring William Holden, Alec Guinness and Jack Hawkins won seven Oscars and is symbolic in most peoples minds at the mention of the Thailand – Burma Death Railway but very few know the history behind the railroad itself. Construction of the infamous railway running from Nong Pladuk to Thanbyuzayat in Burma was started during World War II in April 1942 and completed in November 1943, it took such little time but so many lives were taken. 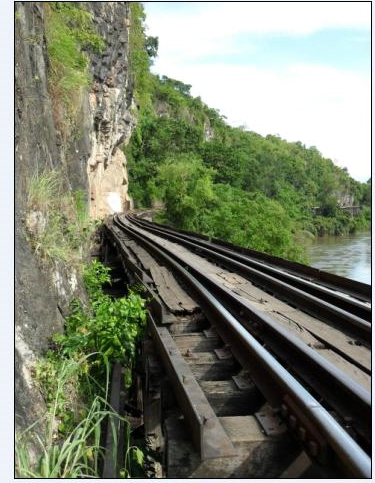 The idea of a railway supply link between Thailand (then Siam) and Burma (now Myanmar) was first considered in the early 1900’s by the ruling British government in Burma. In 1912 the planned railway was abandoned due to concerns over the difficult terrain, jungle diseases and the regions long monsoon season.In 1942 the Japanese Imperial Army decided that nothing would stand in their way of completing the 415 kilometres of one metre gauge railway track.

Wonderful Wi and I started our journey on the railway at Wang Pho station having first visited the small market there. The market had plenty of trinkets and souvenirs on display but I only paid out 40 baht on a small can of Beer Chang…… 40 baht, I must of looked greener than the water of the River Kwai Noi. I didn’t argue, Wang Pho and its past history didn’t seem the place to do so.

In December 1941 Japanese forces invaded Thailand through three entry points. Don Muang airfield, by amphibious landings along the Gulf of Thailand and armed forces by land from the Cambodia border. Fierce fighting followed but against overwhelming odds Siam’s Prime Minister  Field Marshal Phibun Songkhram was forced to order a ceasefire and within two weeks a treaty of alliance had been signed with Japan against the wishes of the majority of Thai people.

The Japanese sought Thailand as a base to further make in roads to Asia. Within months the Japanese Imperial Army had successfully invaded and captured both Malaya, Singapore and Burma. They had taken vast amounts of land and many prisoners of war. 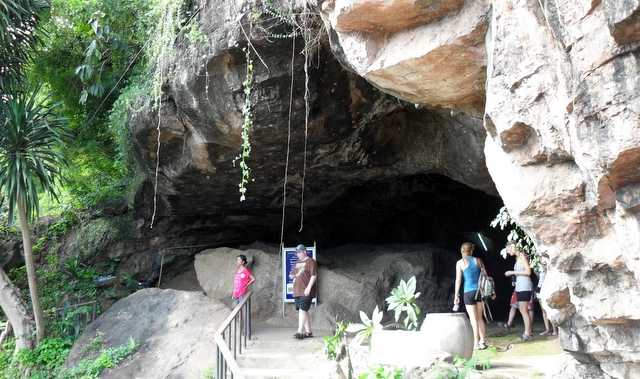 There was a good half hour before the train pulled up at Wang Pho station, we decided to follow many of the other tourists and walk the track. We peered down to the River Kwai Noi flowing freely with a likeness to a watery pea green soup, to our left we sighted a cave on slightly higher ground. 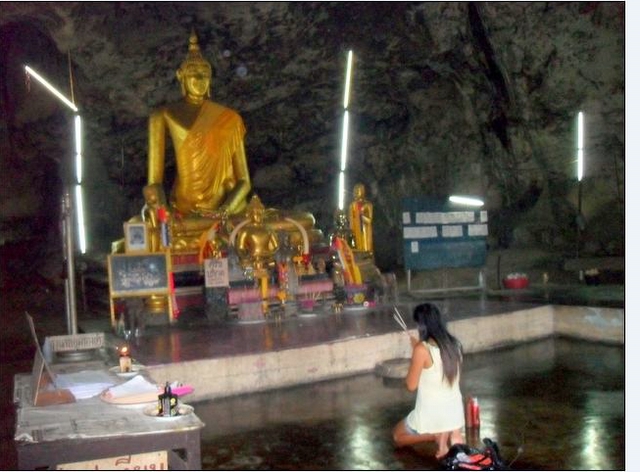 During the construction of the railway the cave had been used as a hospital storeroom, nowadays it was a Buddhist shrine. Wilai knelt before the Buddha statue and offered her thoughts and hopes.

Days later Wilai’s hopes and lottery tickets lay crumpled in our hotel room and less said the better of her dream of a tall, blond, blue eyed man. I looked more alcoholic than teutonic but life’s a lottery I guess.

Japan’s failure to gain superiority in the Pacific waters hastened the need to connect a supply line from Singapore to Burma which the Japanese army had now occupied. The Siam-Burma Death Railway was the missing link.

The railway would provide the supplies to assist the Japanese advancement into India. The plan started with the transportation of thousands of allied prisoners and Asian labourers by train from Singapore to Ban Pong near Nong Pladuk.

Over 16,000 allied prisoners died building the railway and the estimates are that over 100,000 civilian Asian workers perished too. Malaria, dysentary and cholera claimed the lives of many, malnutrition and overwork accounted for thousands of other deaths too. Food rations were meagre. Poor quality rice and rotten vegetables did little to replenish bodies racked by vitamin deficiency, many simply starved to death.

Our journey was short, just a four station ride following the tracks cut through the mountains with the River Kwai Noi going about its business below. The carriages were packed and as the train pulled us along at great speed at times, eyes widened, voices heightened and cameras buzzed and clicked. From Wang Pho to Thakilen, click, click, click, click. 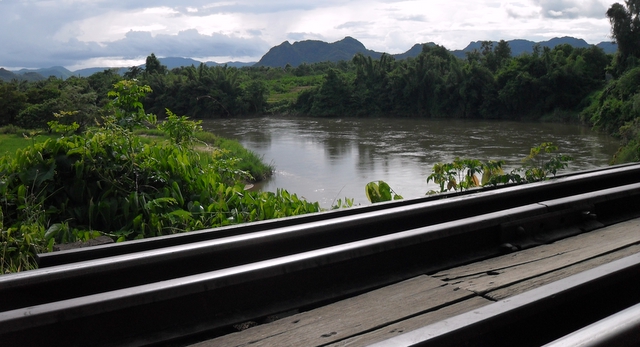 At each of the stations we stopped at more passengers boarded the already crowded train. I wondered if invisible gaunt featured travellers dressed in soiled tattered clothing had boarded too. We left the train and it continued its journey to Kanchanaburi city and the bridge on the River Kwai Yai.

War cemeteries at Chungkai, Kanchanaburi and Thanbyuzayhat hold the remains of 12,849 former allied prisoners of war. If you happen to visit the one in Kanchanaburi city then don’t be surprised if there’s more souls there than meet the eye. Perhaps the journey along the Thailand – Burma Death Railway to the bridge on the River Kwai Yai, leaves some lonely spirits with just a modest walk to the war cemetery and a chance to visit old friends. Who knows.