Udon Thani – Shake It and Wake It 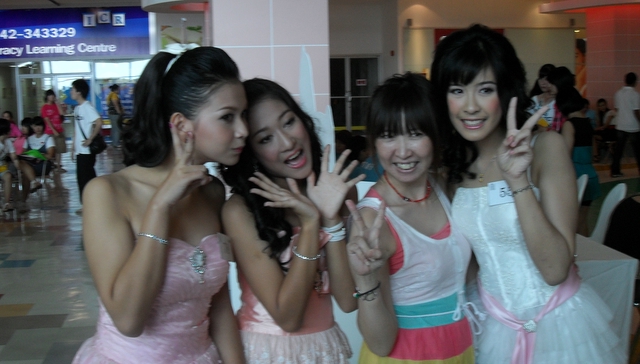 Over the past six years, I’ve stayed in Udon Thani city on many occasions. Those days and nights are spread over countless trips to Thailand, and with each one, I’ve explored and found out more about a city I’ve grown to have a huge liking for and hunger to visit more often.

It’s a mellow, homely kind of city,  but one that needs significant investment and promotion in terms of tourism, and so I thought I’d invest a little of my time in trying to promote it.

Here’s a short introduction and background to Udon Thani city.

Udon Thani is the capital of Udon Thani province in the north-east ( Isaan region) of Thailand. Situated 560 km from Bangkok, travelling to the city is accessible with regular air, train and bus routes. Udon is a transport centre that connects to all the major cities in Thailand. The city’s population is about 143,000 with expats contributing an estimated 2,500 plus to the figure.

The province itself is one of the most impoverished areas in Thailand with agriculture (mainly rice and sugar cane) being its primary industry along with its transport hub. The city itself is never going to creep up behind you, twist your arm, and take you on a rollercoaster ride. You need to poke it and prod it, shake it to life, and then you will be pleasantly surprised by what it has to offer. 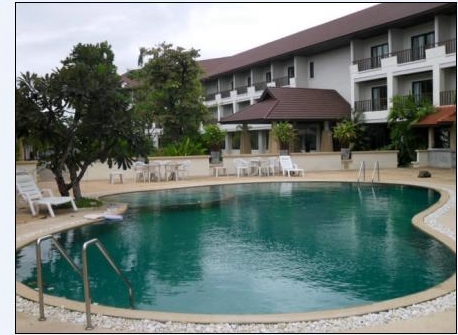 The President Hotel on Amphoe Road is new, tidy, reasonably priced and only ten minutes drive from Udon Thani airport. The rooms are adequately furnished, cleaned each day and come with satellite TV and a good size bathroom. The balcony is a bonus too.

The room rate of 900 baht (US$30) includes breakfast, and all things considered, the price is not too bad for a hotel in a provincial city. The President Hotel’s breakfast spread is typical for a Thai two-star hotel. A self-service style breakfast includes omelettes, fried eggs, cereal and toast alongside many types of Thai dishes that most of us would only consider eating after midday.

The hotel has a large car parking area and if you enjoy a swim then pack your trunks or bikini because the swimming pool, pictured above, is a delightful sight on a hot and humid afternoon.

If you prefer a hotel a little more upmarket, then try the Ban Chiang Hotel (approx. 1200 baht) on Mookmontri Rd, and for those of you on a tighter budget, the Top Mansion situated on Sampantamit Road has rooms in the 400 – 500 baht range.

Out and about in Udon Thani

Where do we start? The first McDonald’s outlet has just opened in the city, and if that hasn’t put you off, then please read on. 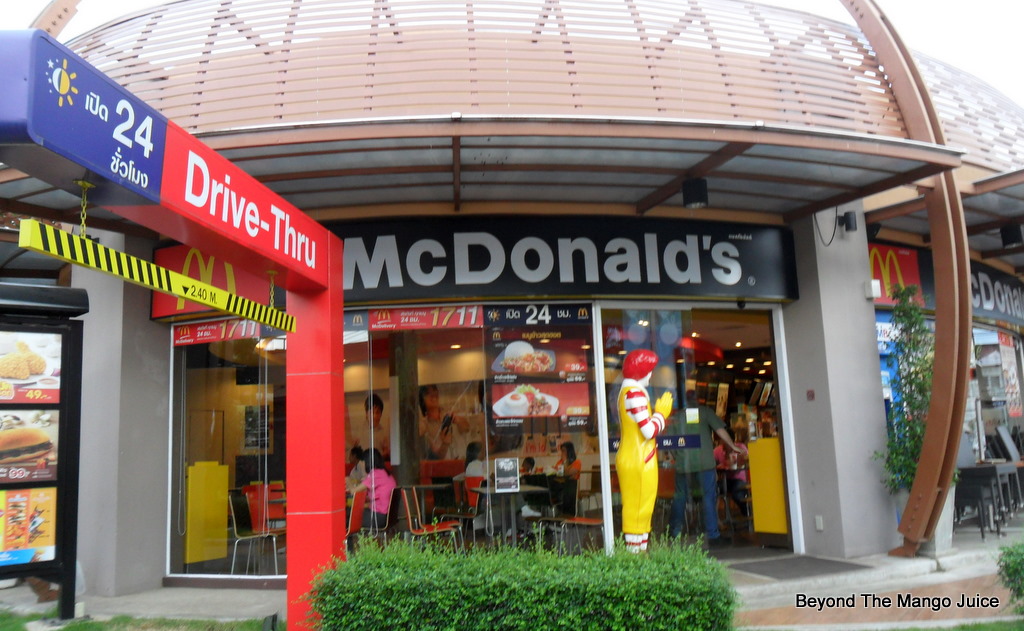 There are lots of Thai and International restaurants in the city. Japanese, Cantonese and Western eateries add to a spicy mix of Thai restaurants, and of course the region’s very own unique blend of Isaan food. If you’re stepping off the Pattaya, Phuket and Phi Phi carousel of Thailand tourism, you’ll discover this northeastern city has a wide range of cuisine which won’t break down the door to your bank. 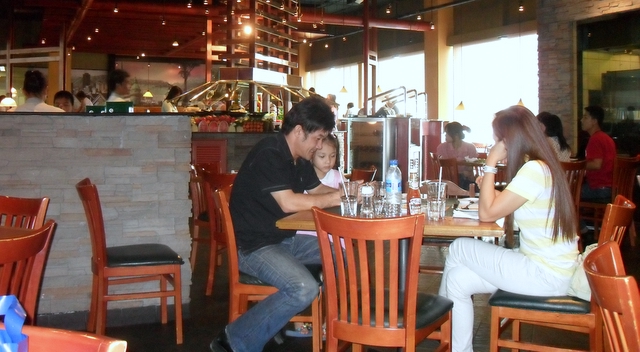 Udon Thani has a relaxed, gentle paced way of going about its day and it’s a city which offers a welcome break from the commercialised resorts which have such a magnetic draw to the majority of tourists visiting Thailand. Although if you’re seeking daytime attractions and scenic photo sessions, then you best not board your plane, train or bus. Disappointingly, Udon Thani pulls up short in terms of sightseeing opportunities in the city itself, but if you want shopping and nightlife, then it has a lot to offer. 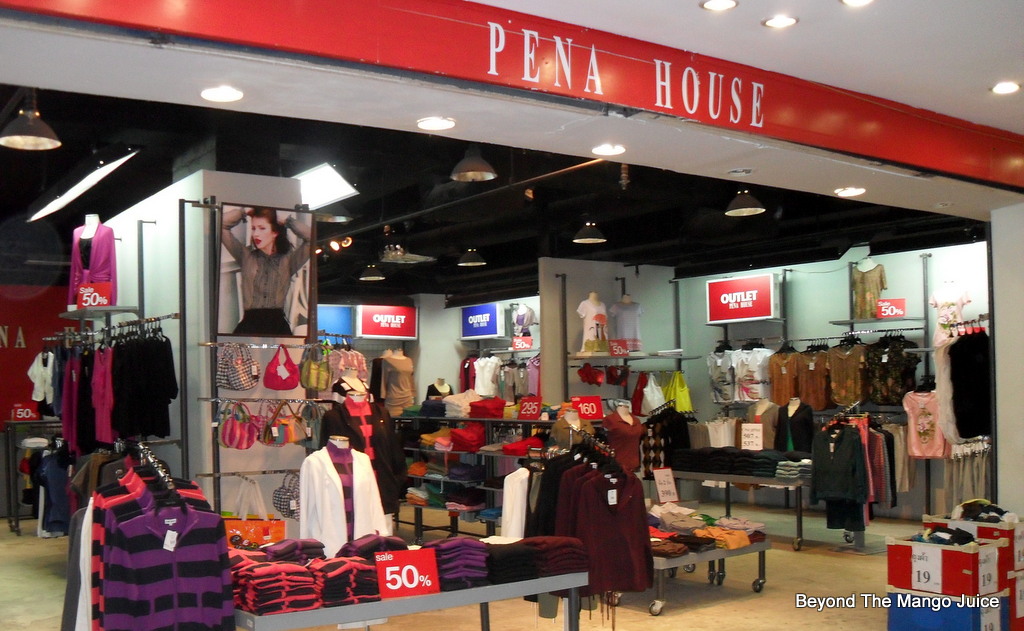 Central Plaza has money exchanges, ATM’s, Tops Supermarket, Boots Pharmacy, Robinson’s Department Store, KFC, Pizza Hut and many other foods and retail stores. The air-conditioned mall is a welcome relief from Udon’s often hot temperatures. In a city with a shortfall of daytime entertainment, Central Plaza is where anyone in the know tends to head.

Things to do in Udon Thani

Udon Thani does have a few daytime attractions, but they’re unlikely to get your blood pressure soaring and pop beta-blockers to calm you down. Nong Prajak Park is not too far from the city centre and is an ideal place to enjoy a picnic amongst its beautifully landscaped gardens which surround a large lake. The city and its neighbouring area have many temples and the pick of these are – Wat Thipphayaratnimit, Wat Phothisomphon, Wat Ban Na Kha Thevi and Wat Matchimawat.

Travelling further afield, you can visit Udon Thani Province’s most famous tourist spot which dates back thousands of years, Ban Chiang Bronze Age archaeological site. Ban Chiang has been on the UNESCO World Heritage list since 1992 and is about 45 kilometres east of the city. The sights of Udon Thani are hardly white knuckle rollercoaster rides, but there is plenty of history and culture to view in and around the city. Udon Thani Provincial Museum on Phosi Road is one attraction for any culturally minded traveller who wishes to view the history, archaeology, geology and culture of Udon Thani Province.

Stepping off the train station platform and into the adjoining Centrepoint Night Market is not an option for a baggage laden traveller, but after checking into your hotel backtracking to the market would be an excellent idea. You can shop till you drop at Udon’s busy night market and then relax at one of the many small open-air restaurants inside this busy, bustling bazaar. 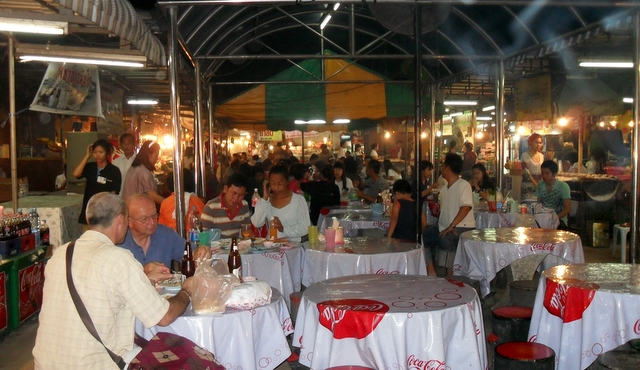 For a more spirited evening, nightlife lovers will find many lively bars within easy walking distance of the Centrepoint market. Udon Thani’s Nutty Park is in the heart of the city’s nightlife area and has a mass of western bars and bar girls. Mr Tong’s bar is next to the market and Udon Day and Night Bar Complex in Sampantamit Road and is another lively hotspot. The Charoen Hotel’s Yellow Bird night club is a popular venue for live music and is only a ten-minute walk from the main nightlife area. 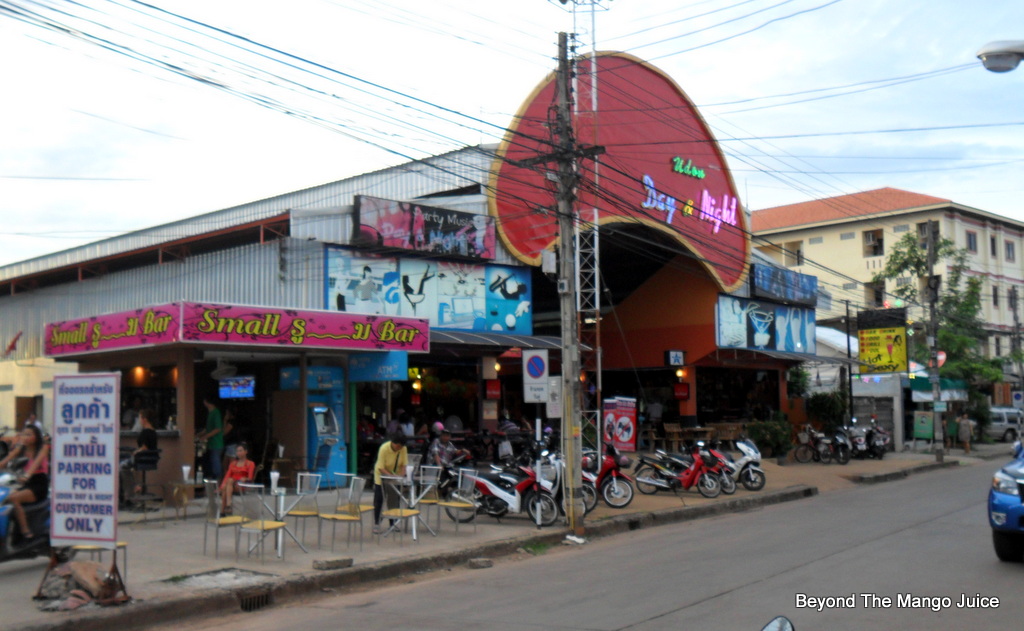 Udon Thani is a little bare on day excursions, but big on shopping and markets, but a big plus is its nightlife scene which is more than a match for most of Thailand’s provincial cities. Pitch in decent standard hotels and the whole mix makes Udon Thani worth a visit for a few days at least. Udon Thani is the kind of place you may have to ‘shake, to wake it’, but when you do, you’ll discover she’s a bit of a sleeping beauty.