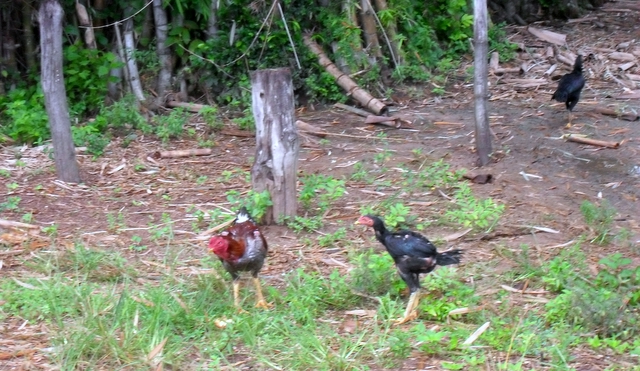 Chickens bloody chickens. There’s chickens every bloody where, and roosters too.

Since spending a fair amount of time over the years in Thailand I have often wondered if KFC stood for Kill the Fuc*ing Chicken, rather than Colonel Sanders old hat Kentucky fried version, because in a rural village they are everywhere. If the bastards buggers aren’t waking you up at half four in the morning then they’re crapping on your lawn. But surely they’ve got a use or two.

I’d like to know how at the height of the H5N1 Bird flu virus outbreak in 2004, when Thai authorities killed over 40 million chickens, whenever I walked under Wonderful Wi’s mama’s house I got chicken crap on my shoes. 40 million, how bloody many are there in Thailand. 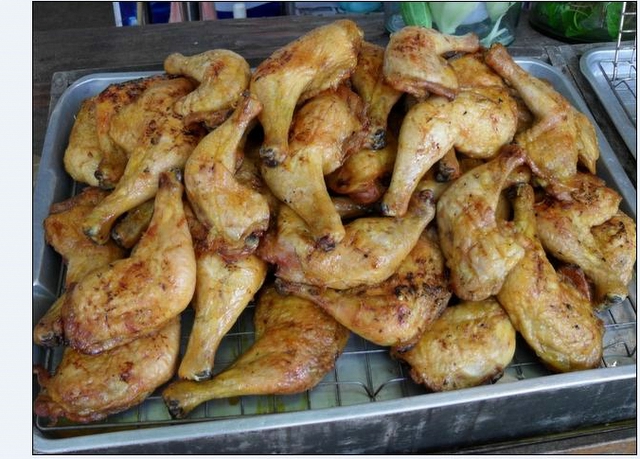 If you culled every last chicken in Thailand then you’d destroy with them so many Thai dishes their receipe books would have to be rewritten. From Thai red chicken curry to kao pad Kai (chicken fried rice), the bird nests among many pages in every Thai cookery book and there seems to be someone selling classic Thai style fried chicken on every street corner.

I’ve got to put my hand on my heart and admit the garlic tasting Thai fried chicken doesn’t dance on my palate as much as it does for others. Having an aversion to garlic does slim down the Thai cookery book a bit. A sweet tasting yellow chicken curry is for myself the absolute of culinary delights, and I’ll even forgo French fries to spoon it upon a hot steaming bed of rice.

If it’s free range you’re after then rural village chickens are footloose and fancy free. They don’t stray too far from their territory but can often be seen reappearing from under a passing truck or stood eyeball to eyeball with a soi dog. More often than not the dog will traipse off first.

If threatened, chickens will attack and sometimes kill small snakes. I have read they will even eat them, but whether that’s true, I’ll pass on. Village chickens will eat anything and can be seen pecking away at the dusty ground all day long. Free range and free fed, apart from a handful of rice corn. Some however, do have their range restricted at times by a large upturned bamboo type basket. Cage to be more precise. 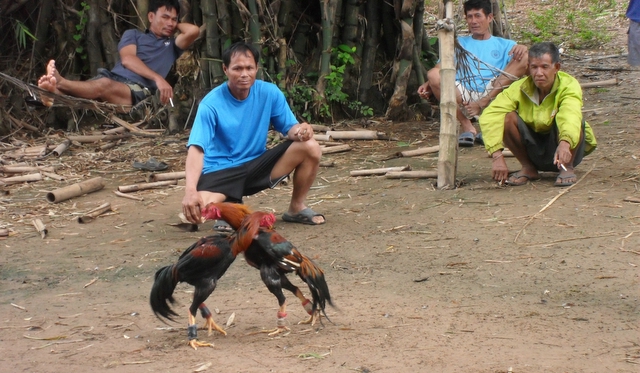 Cock fighting is very popular throughout Thailand and none more so than in the villages of Isaan. Fighting cocks are often paired off as friends gather for drinks and some small talk. When the rice season has passed, local work is scarce and weekend cock-fighting events become near daily events.

Cock fighting doesn’t appeal to many westerners raised in an anti blood sports era, but for some, and I include myself, they are a great spectacle of fast action and the atmosphere is boisterous and at times quite intense. Winning means everything to the roosters owners but not necessarily at the cost of their prized cock’s life.

With money scarce in typical Isaan villages, losing your fighting cock in a bout against a friends’ rooster is not a clever idea. The small village bouts are often stopped way before any real damage has been inflicted, and the roosters don’t usually have spikes or spurs attached to their legs.

The larger organized cock fights where big money changes hands in the form of illegal gambling on the outcome of each bout is a far different matter. In Bangkok a highly rated fighting cock can be worth a few thousand US dollars and a champion a lot more. You wouldn’t see those birds wandering without care or purpose along the middle of a busy road. 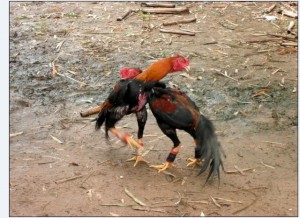 Your neighbours rooster may wake you at 4-30 every morning, but ridding yourself of that wake up call could prove costly. Bird owners can claim compensation from any party known to have killed one of their birds, although a one-off incident would be unlikely to result in any more than a few choice words.

Recently one of our dogs killed two young chickens and Wi was politely advised by our neighbour that any more incidents would result in payment of compensation. That would amount to around 100 baht for a chicken. The settlement for a promising or active fighting bird would be considerably higher.