You Oughta Drink the Water 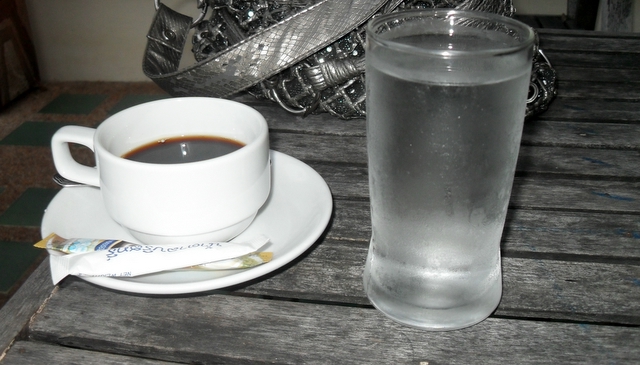 It’s pretty rare in Thailand that I’ll drink coffee, but nowadays due to age and a certain acceptance that getting drunk during the day takes the enjoyment out of the evening, I do sip the crushed beans on the odd occasion. But why do they keep giving me a glass of water with it. By the way, the coffee and water in the top photo are mine but the handbag isn’t. I’m a bit of a sugar freak but I ain’t that sweet. 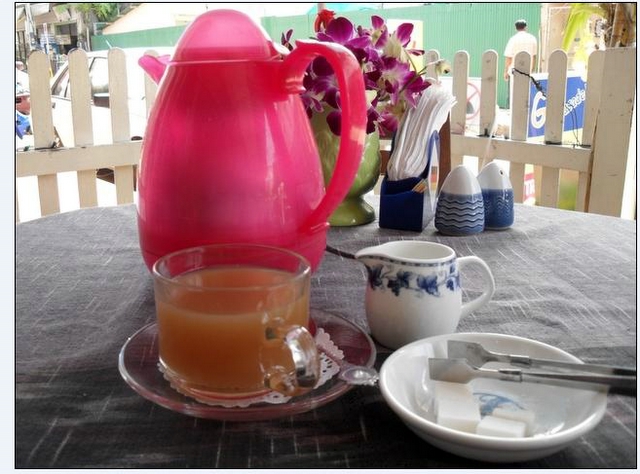 I much prefer a pot of western style tea (photo right) but in Thailand’s smaller towns and more off beat cities some cafes don’t serve it. Looking at the Thai script on the menu cards often leaves me wondering exactly what they do offer.

Thai’s understand the word coffee but tea mostly gets a puzzled look and the Thai word for tea (cha lorn) normally sees you being served hot Thai flavoured tea (no milk) which doesn’t do much for me at all. The sweeter iced tea (cha yen) sold in Thailand is tastier and so much more refreshing.

Many Thai people drink Green Tea to aid their digestive system and also for weight loss. Young Thai ladies swear it helps keep their bodies trim and Muay Thai boxers are known to use it for quick weight loss when training for a bout.

The green tea emporium in Thailand expanded by over 20% in the first nine months of 2009 and the chilled green tea market now has a yearly sales value of over 160 million US dollars. Back to coffee and water.

If you were asked where coffee originated from then I’m sure many of you would perhaps guess at South America, Brazil. Those of you who are more caffeine dependent will probably know the answer is Ethiopia in Africa. The African nation was the first to recognize the vitality and energy the coffee beans yielded.

Coffee soon appeared in Arabia as trade routes widened and the former major trading hub Port of Mocha in Yemen has the name of the renowned coffee bean whose origins are firmly planted in Africa. In the 21st Century coffee beans are cultivated in many parts of the world.

Java beans from Indonesia, Bourbon from Brazil, Costa Rican Tarrazu and the highly priced and prized Jamaican Blue Mountain are just a few that show how far the popular caffeine bean has spread from its roots. There was no mention in my research of Tesco’s Own Brand, must be a new one. Back to water and a few theories as to why it’s served with coffee.

Apparently coffee has a bitter taste, I chose the word apparently with great care because I thought it tasted like coffee. The dehydrating effects of caffeine are well researched and so the glass of water that partners it makes sense until you dig a little deeper.

Caffeine acts as a mild diurectic, which basically means you urinate more. Water has the same effect and so theory one gets a big no no from me even though I do understand the replenishing effect water has and that coffee still leaves you a little thirsty at times. 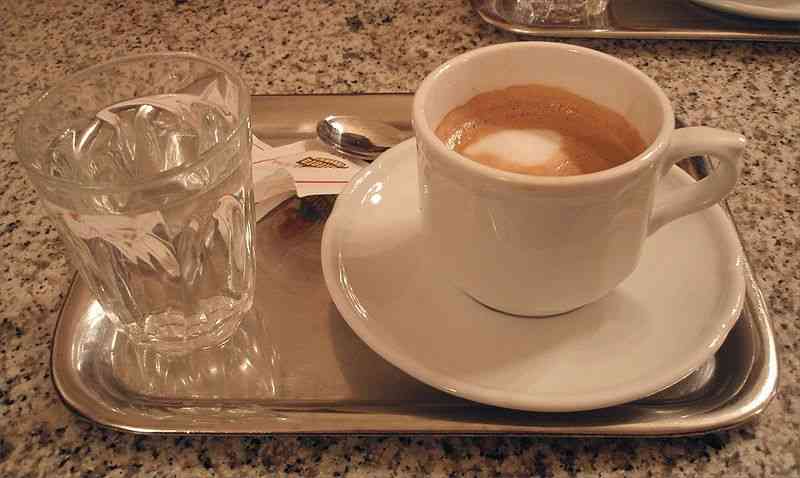 Theory two is simple. The glass of water is there to keep you the customer at your table longer. A cunning ploy to get you to order something more. If the theory is correct then in Thailand the water would be there more as a way to give you more time to relax after drinking your coffee rather than any ruse or scam. Cunning ploys are not really a part of Thai culture and the devious scheme to get you to spend more would fit much more snugly into western society.

My final theory took a lot more research and goes back many years to Arabic traditions and their coffee houses. In the traditional North African and Middle East coffee houses a proprietors hospitality was just as important as the quality of the coffee his establishment sold. Water was expensive due to its sparsity and by serving it as an accompaniment to the coffee it was a way for the shop owner to show the customer their gratitude for their visit and trade. I quite like this explanation but I’m not convinced enough to buy it even if the offer comes with a free glass of the clear stuff.

After researching this subject in some depth I am still unsure as to why a glass of water is served with coffee. Perhaps you know the answer. I do know that I oughta drink the water but I never do. How about you?

Tags: coffee in Thailandwater with coffee