A Slow Boat to Suvarnabhumi 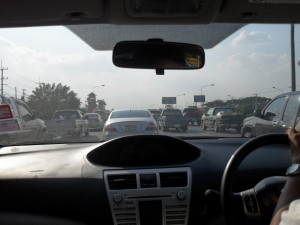 I’m not sure what was the biggest problem, traffic congestion or bronchial catarrh. I’ll spit it out, I think the day was more full of lot (cars) than snot but either way I didn’t make it to Suvarnabhumi airport on time. I missed my flight back to the UK. Mai phen rai. 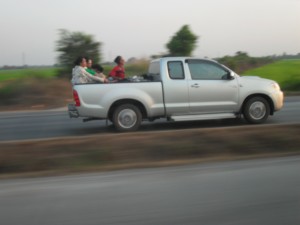 I had an eight o’clock evening flight from Suvarnabhumi and before that lay a seven hour journey from Udon Thani. We knew the roads would be busy and so we set off a full 12 hours before my scheduled flight time. For the previous 10 days I’d been suffering from the biggest mother f#cker of chest viruses I’d ever had, Paracetamol it loved and antibiotics it just swallowed whole, and kind of smirked back at me. My phlegm was a fluorescent Chernobyl green. Mai phen rai krap.

On New year’s day I’d tried to book a flight for the 3rd from Udon Thani to Suvarnabhumi. No chance, every flight was booked. Buses, exactly the same. I hired our rented car for one more day and we set off making the 125 kilometres to Khon kaen well ahead of time. That left a mere 550 kilometres to cover. Our problem was the Thai New Year holidays were coming to an end and those who had headed north to their towns, villages and families were now heading back south to Bangkok and work. Thousands and thousands of them.

On a two week holiday I had seen my mate married in Khon Kaen and Wonderful Wi’s nephew cremated in the village. Sweet and sour, hot and cold. Manicured eyelashes to ashes. I was heading home with a chestful of sticky green memories. Mai phen rai krap pom.

The highway from Khon Kaen to Kolart started to get a little like my chest, packed solid with something you didn’t want. Catarrh and cars, they’re both slow to move at times and the colours sometimes lewd. At every city traffic light we waited for at least 20 minutes. Isaan was heading back to Bangkok. A slow boat to China would have been much quicker. 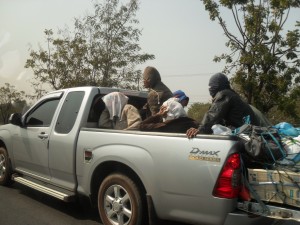 Thai’s going back to Bangkok, Isaan must have been stripped of every last asset. The pick up trucks were crammed full with sacks of rice and everything else needed to make the stay in Bangkok more Isaan. Amongst it all Thai’s slept in the high scorching temperatures and I daresay say wept all the way to Krungthep. 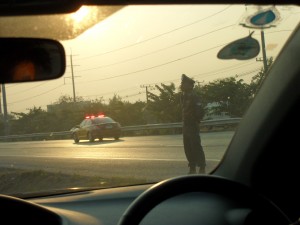 The straw that broke my camel’s back was around Saraburi. Those of you experienced in the ways of Thailand will understand the following. Every kilometre or so along the highway policemen started to appear with their mouths seemingly glued to a walkie talkie. Every so often a clutter of police cars and bikes were parked on the side of the road. A VIP motorcade was due to pass through and eventually we were waved over to the adjoining highway sliproad and to a resounding halt. Saraburi, why did you do that to me. Five kilometres in one hour. The slow boat had sprung a leak.

Our progress surprisingly picked up as we neared Bangkok and it looked like we would make the airport with a few minutes to spare, then Lady Luck lifted her skirt one more time and gave me a full blast of her ass. With just 20 kilometres to travel until we hit the highway toll and a fast run along the expressway to Suvarnabhumi we ground to a virtual halt. Mayday, mayday, we are starting to sink. About 20 minutes and a further two kilometres went by at an agonizingly slow pace. We eventually reached the tolls and they were unmanned.

Our run along the expressway to Suvarnabhumi was trouble free and the speedometer reached previously unseen heights. I hit the terminal running but I knew I’d missed check in, it was closed, twenty minutes too late. Saraburi why did you do that to me. I was left with the decision of staying in Bangkok or heading back to Udon. No choice really. We left Suvarnabhumi at about eight evening time and hit Udon Thani at half three the next morning. Seven and a half hours, nearly four hours quicker than the opposite route.

I have now rebooked a one way flight back to the UK for the 9th at a cost of 24,695 baht. Mai phen rai krap(whatever will be will be). Writing this post today my chest virus is starting to clear and I’m feeling a lot better. Perhaps in some small way missing the flight was a blessing in disguise as the long haul would have totally drained me. Best wishes and a happy New Year from Udon Thani.