How Much Money Do You Tip in Thailand 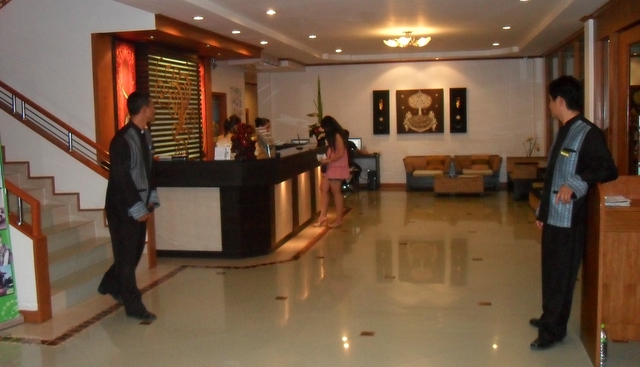 On many occasions in the Land of Smiles, I’ve booked into a hotel for an overnight stay. Wonderful Wi and I tend to do so when we fancy a night out in Udon Thani for whatever reason. The scenario as we approach the hotel entrance is nearly always the same.

We jump out the samlor with me clutching our solitary overnight sports bag. I tip the driver (20 baht), and we then head up the steps to the hotel doors. You can guarantee before you can push one of the doors open a bell boy has appeared out of nowhere, grabbed your bag and is stood in front of you holding the door open. He then ushers you to reception like the complete professional he is, check out the top photo for devotion to duty. 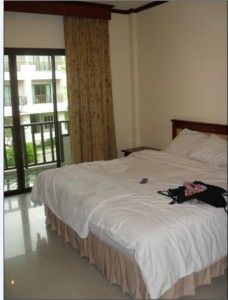 After you’ve checked in, the receptionist always hands your key over to the bell boy who guides you to the lift and up to your room. He switches on the air con, turns on the TV and opens and shuts the refrigerator door. I always get the feeling he thinks I’m a complete and utter fool. He then stands motionless and looks at the clown. After, comes the moment I don’t like.

I’m forced out of what I would quite plainly put down as etiquette to hand over a tip (20 baht) to someone who five minutes earlier mugged me on the hotel steps, took my hotel key when he knew it was mine and then carried my bag with sod all in it up to my room. To cap it all, he then has the goddamn audacity to make out I don’t know how to turn on a TV, and I’m clueless as to the square white thing with a door is a bloody refrigerator. I must admit air-con systems do confuse me. He must think I’ve just arrived from an Isaan village.

Now being a little more serious, I realize bell boys do need tips to bolster their low salaries, but I’d like them to give me a chance to take up or refuse the offer. Carrying a sports bag with hardly anything in it is barely playing the game and come check out time the following morning, it starts all over again.

I’ll quite often give a 20 baht tip to a bell boy to go over the road to the nearest 7-Eleven and buy me a packet of cigarettes. Many times late at night when the hotel has been quiet I’ve bought the bell boy a bottle of beer, I like to offer rather than get backed into a corner with no way out. If I’m loaded up with suitcases and bags, then I can fully understand their purpose and intent.

When packing my bags to leave I make it a regular rule to leave 50 baht (100 baht for a more extended stay) for the room maid, though I do wonder which member of staff gets to it first and by that, I don’t mean the bell boy. 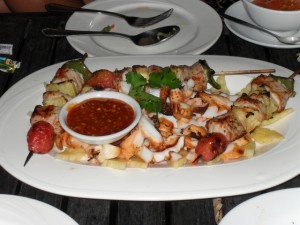 Eating out at the numerous restaurants that every Thai resort and big city has is an entirely different matter. I believe in these type of places; tipping is a way of showing your appreciation for the effort put into preparing and serving your meal and any drinks you may consume.

Once again, as with the hotel bell boys, staff wages in Thai restaurants are not overly high, and the employees rely heavily on the goodwill of their customers to boost their income in the form of tips.

I set myself a minimum 10% service charge. If a restaurant bill amounts to 800 baht then assuming myself and everyone else in my company is happy with the service provided I’ll leave 80 baht as a tip.

If the meal is at one of the smaller type cafes and only prices around the 100 baht or less mark, then I’ll typically leave a 20 baht tip and not anything lower. The street vendors are the ones to lose out with me as I very rarely leave a tip unless I’ve sat down at a table place and eaten. 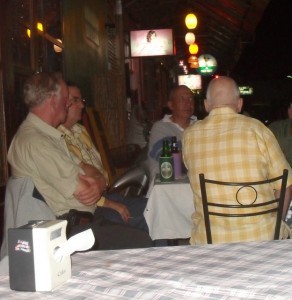 Tipping in the beer bars is a place where peoples generosity increases as the night wears on. Sometimes I tend to flit from bar to bar only having the one drink in each. Settling the bar bill with a 20 baht tip which is the minimum I like to leave makes the one beer rather expensive. I have tried walking away with just a 5 baht coin left on the table, but I tend to find my walk shapes to one of a sheepish appearance. It’s a 5 baht habit I really should try and get into.

There is a vast difference in being on holiday as to living in a country as an expat where coming across the tipping sector can be a daily occurrence.  As a rule of thumb, Thai people are not big tippers (sweetener is a better word), and the tourist industry is an area where tourist and expat activities do intersect.; however, a retired or working expat probably adopts a Thai tipping nature as they become more settled into their new way of life.

As an expat or tourist, I’d like to know about your tipping habits in the Land of Smiles. Are you generous to a fault, or do you see generosity as a weakness which places others under undue pressure to do the same? If you have any views on tipping in Thailand, then please drop them in the comments box below.