On the Road to Ban Chiang 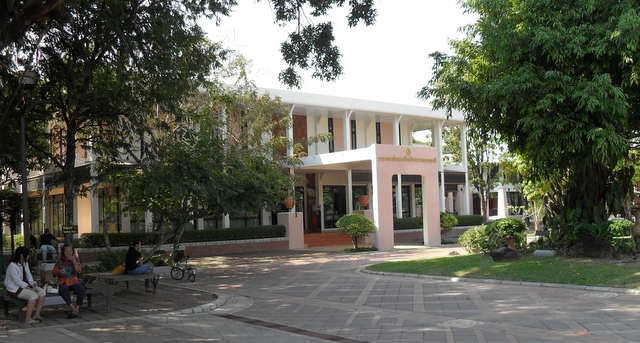 It was Boxing Day, the day after Christmas and I quite fancied taking a ride into Udon Thani. A couple of days later we were due to take our pre New Year pilgrimage to the mountains of Loei Province to spend a few days visiting the annual Phu Rua Flower Festival. In the 12 months since our last visit my lungs had cleared out the last remnants of pollen and I was sure the festival organisers had cleared up the last of my dogends and beer cans. It would be safe to go back.

On this particular day I just wanted to spend a little time in a big city that I knew very well. However Wonderful Wi had a plan which wouldn’t involve travelling as far and it was to somewhere she knew I wanted to see.

We were off to the Ban Chiang National Museum which housed the remains of a prehistoric settlement who lived on the Korat plateau over 5,000 years ago. I wondered if they had known the Waltons.

About one hour into our 45 minute journey Wi took her left hand off the steering wheel and picked up her mobile. We were lost. She called her brother and after a rapid fire conversation she spoke to me with an air of confidence.

‘ I speak with brudder (brother). About ten minutes we go left, then five minutes more Ban Chiang come.’
‘ Well done Wilai.’ I whispered with an air of resignation. 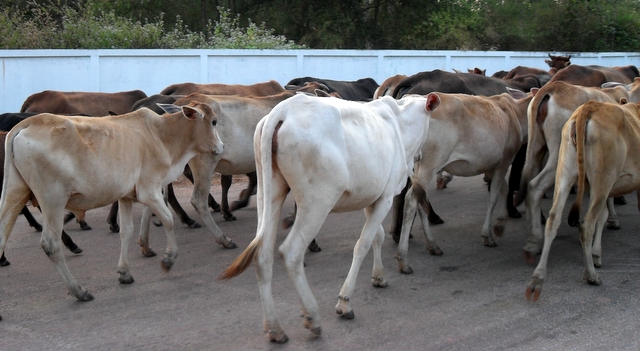 A good half hour later we stopped outside a village house where an elderly woman was attending to her garden. We were lost. The conversation was a little slower paced and then we set off again to what I hoped would be Ban Chiang. 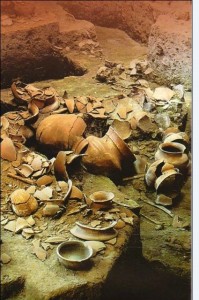 We eventually arrived at Ban Chiang after our 45 minute journey had taken over two hours. I feared the return route. Wilai had once taken less than a hour to drive us from our village to Ban Dung and then three hours to get back home. We got lost. As we parked the car for a split second I regretted having not brought my electric shaver and toothbrush. I nearly suggested that we should be heading back home as it would be getting dark in about six hours. I decided against it. Sulking bottom lips cost money to put back in.

The entrance fee to the museum was so minimal I can’t recall the exact amount and the fee included a very informative brochure explaining the history of Ban Chiang and its archaeological discovery. Mine in excellent English and Wi’s in Thai. Most unusual.

Within minutes of being inside the main museum hall one of the female attendants came up to me and politely informed me no photography was allowed inside the building. I looked around at cameras held high by other visitors and guessed she was in for a busy day. I did manage to shoot a couple of pictures but a decent scanner and a colourful brochure are a godsend at times. I hope they won’t mind.

The museum itself was like the outside of the building (top photo), neat and tidy with an almost brand new look to it, which was strange considering the museum’s theme. Inside there was plenty of pottery on open show. There were wall displays and a TV video explaining the discovery of the Ban Chiang archaeological site and the finding of pottery, bronze and iron relics from thousands of years before. They were proof that an intelligent agricultural community had lived in the northeast of Thailand around 5,000 years before. 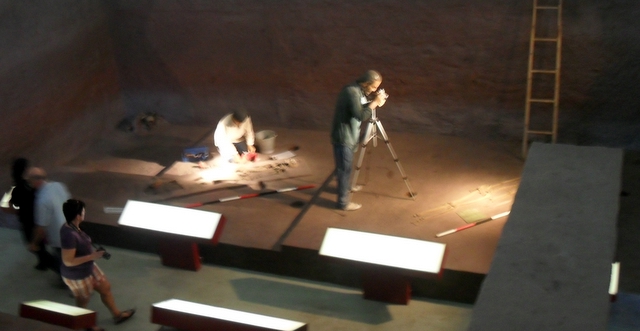 The photo above is one of two model reconstructions at the museum showing the painstaking digging and recording of the many artifacts and human skeletons that were discovered. The skeletons were found either laid out straight or with the knees bent and broken pieces of pottery had been placed on their bodies before burial. Children were buried sat in an upright position inside large pottery jars. 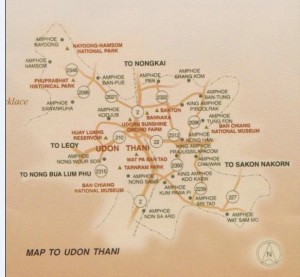 The museum covers the three periods of Ban Chiang from 3,600 B.C. to 200 A.D. and shows the development of an agricultural society into a highly skilled community with high technological skills which were proven by the excavation of bronze and iron artifacts such as spearheads, axes and arrowheads.

Now a quote from the Ban Chiang National Museum brochure.

Ban Chiang has been called the centre of a remarkable phenomenon of human cultural, social and technological evolution ‘in Southeast Asia which prospered over 5,000 years, from 3,600 B.C. to 200 A.D. In 1992 the Ban Chiang archaeological site was registered as a world heritage site at the World Heritage Committee, under Condition of the Convention where by the site must ‘bear a unique or at least exceptional testimony to a cultural tradition or to a civilization which is living or has disappeared.’

If you are ever in the Udon Thani area then a visit to Ban Chiang National Museum is well worth considering and directions can be seen on the map opposite (click to enlarge). Wilai and myself enjoyed our day at Ban Chiang and remarkably it only took us about one hour to get home.