Thailand – The Other Side of the Coin 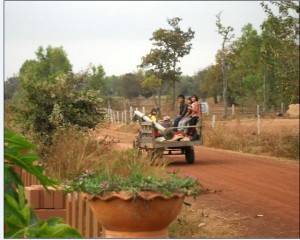 New Year’s Day 2010 was only just over three weeks ago and a horrific incident occurred in Wonderful Wi’s village just minutes into the start of it. My memory is clear but my mind somewhat confused as to why it all happened.

Sure, if you eat enough of the Thai holiday brochures then the Land of Smiles is the most perfect place in the world to be. Sun, sea and friendly smiles. Basically the brochures have got it right but then again there is another side of the coin.

I have stayed at our village home for each of the last four New Years and on all three of the previous occasions there had always been a hint of trouble as the final minutes of one year turned into another. This time was no different, only a lot worse.

Our evening had started calmly enough with a barbecue for Wilai and some of her younger nieces and nephews. I left them alone and settled for a few quiet drinks in the house, a little TV, newspaper and some peaceful time on my own to record my thoughts with paper and pen. I was more than welcome at the barbecue but I just wanted everyone to talk in Thai and enjoy themselves. Besides I’m a lone wolf at heart. 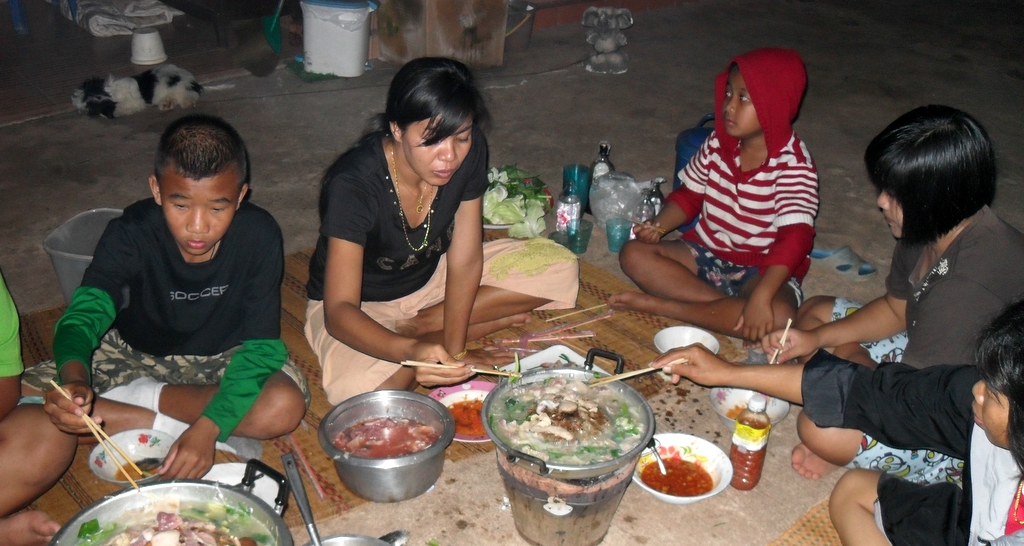 The barbecue went well, they always do. Afterwards we let off a few fireworks and at about nine thirty the kids went home. Wilai was tired, she retired to the bedroom about half of a hour later. I promised I’d wake her for the New Year countdown. When countdown approached I decided to leave her be, she was sleeping peacefully and countdown was really for teenage kicks and drunken fools. Wilai was neither. A drunken fool went to bed minutes after midnight.

I woke about one hour later, I could hear the sound of screeching motorbikes and Wilai’s soft voice gently calling me.

‘ Hus..band, have problem outside house. Have boxing.’

I could hear two of our dogs barking but it was the motorbikes noise that clinched it for me. I shut my eyes and went back to sleep, I’d heard it all before. I was woken again about ten minutes later.

‘ Hus…band, you must come outside house. I think somebody is dead near our gate.’

I quickly dressed, grabbed my camera and hurried outside.

Our house is the very last in the village. A road runs past our home for about three kilometres (top photo) where it meets the next ban (village). On each of the previous years New Year Eve nights, rival village gangs of youths had clashed on motorbikes and the odd spat had taken place. This night was different. 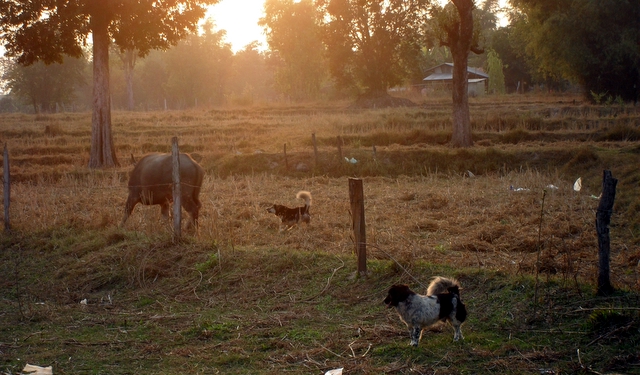 The photo above was taken during daylight and is the view from our front gate. On this particular night a little further back from where the furthest dog is pictured was a crowd of 20 – 30 villagers gathered around someone lying still on the floor. Right outside our gate was a police truck with two officers inside. Wilai advised me not to take any photos.

Tongues wagged and the drama unfolded. The prostrate soul was a young man who had been returning to his home after leaving the village communities New Year bash, and bash it got it.

As he approached the side road leading up to our house a gang of thirty or so youths on motorbikes from the neighbouring village were waiting near the unmanned security checkpoint at the rear entrance to our village. They set about the lone young man with every weapon they had and anything else they could lay their hands on. He was left lying in a pool of blood and his life ebbing away. The youths then roared away on their motorbikes back to their own village. The police put him in the back of their truck and took him away to the local district hospital.

About one week later I asked Wilai if the young man had passed away and was pleased to hear he had been released from hospital and was recovering at home. Why would youths resort to such a cowardly act.

Perhaps you’d be safer in the city behind its grilled and steel barred windows.

I’ve been looking through a few forums this week and an Udon Thani based one caught my eye. I’ll omit the name of the forum but will say that it has a lot of good information on Udon Thani and the following is not a show of disrespect towards it.

One forum member posed the following question with regards to Udon Thani. I have hidden the names of the forum members who took part in the discussion. Here are some of the extracts.

Do you feel secure in Udon?

I feel secure. 1st defense is my Pit Bull xxxx who has run of the house and sleeps indoors. After that it’s a chunk of wood and mace which I keep in our bedroom. …..About 3 or 4 months ago we had an attempted break-in through the kitchen window, the thieves removed the window panes but I suspect they never made it in because xxxx was sitting outside the kitchen door growling. Coincidentally the break-in occurred not longer after the home delivery of a 40″ LCD TV. I suspect it was the delivery guys, xxxx wasn’t in view when they brought the TV in the house.
………………………………………………
I have a knife or mini bb bat /club positioned around the house, so no matter, I can get to something if surprised. The landlord has the place fairly secure, w/steel grate doors inside and out w/padlocks. leave laptop and small electronics in house when out and about. Before I used to take them, as only things that could be taken, the rest had to be carried over that wall, not worth the hassle, next house.
……………………………………………….

Well if I decide to buy a Plasma TV I will deliver it my self thank you xxxx. I have all my in laws living around my new house and I am not living in it yet but I am still concerned about a break in. I will NOT get a dog. I think a machete about 60 C/M (2ft) long should be enough to handle would be burglars.

Is the above just Pit Bulls and paranoia or a reason to sleep with one eye open and just the one ear plugged. Thailand might be the Land of Smiles but sometimes its coin falls on the other side.