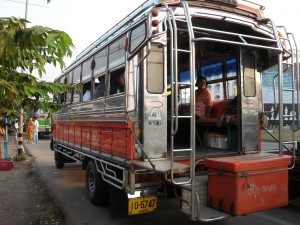 Having re booked my flight back to the UK for this coming Saturday I found myself with five clear days to further explore Udon Thani city. With my chest virus infection slowly starting to clear I looked forward to a little R & R in a city which had provided exactly that to American serviceman during the Vietnam War many years before. Wonderful Wi had other ideas. 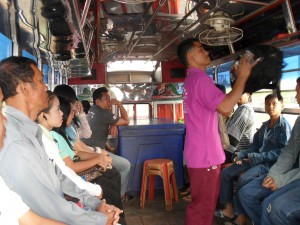 Wi suggested we use one day to visit our village home as she didn’t have enough faith in her mama to attend to her numerous collection of trees, flowers and plants. The young one was also missing our three dogs and especially the youngest of them Pepsi our four month old pup. I agreed and suggested we stay the night.

Two days earlier we had handed back our rented car with a full tank of fuel and a rich shine from a valet service, the 3000 baht deposit was gratefully received by me. At seven in the morning we left our apartment complex and flagged down a samlor ride to the local bus station to board a rural bus to Wilai’s district town. It was a mode of transport I hadn’t travelled on for a good few years. The bus was waiting just minutes from departure and there to greet me was an old friend.

Khun Bai is one smart dumb Thai. Let me explain. Bai is a very alert man but he is dumb from birth and gets by with his own brand of sign language and grunts of various tones. He is also one of the funniest persons I have ever met. Bai has worked the same bus route for years and once had a very short spell as the driver. His liking of alcohol ended that and he was soon back to issuing tickets at the rear of the bus. At just after seven in the morning Bai and myself shared a couple of beers, something we had not done for at least three years. 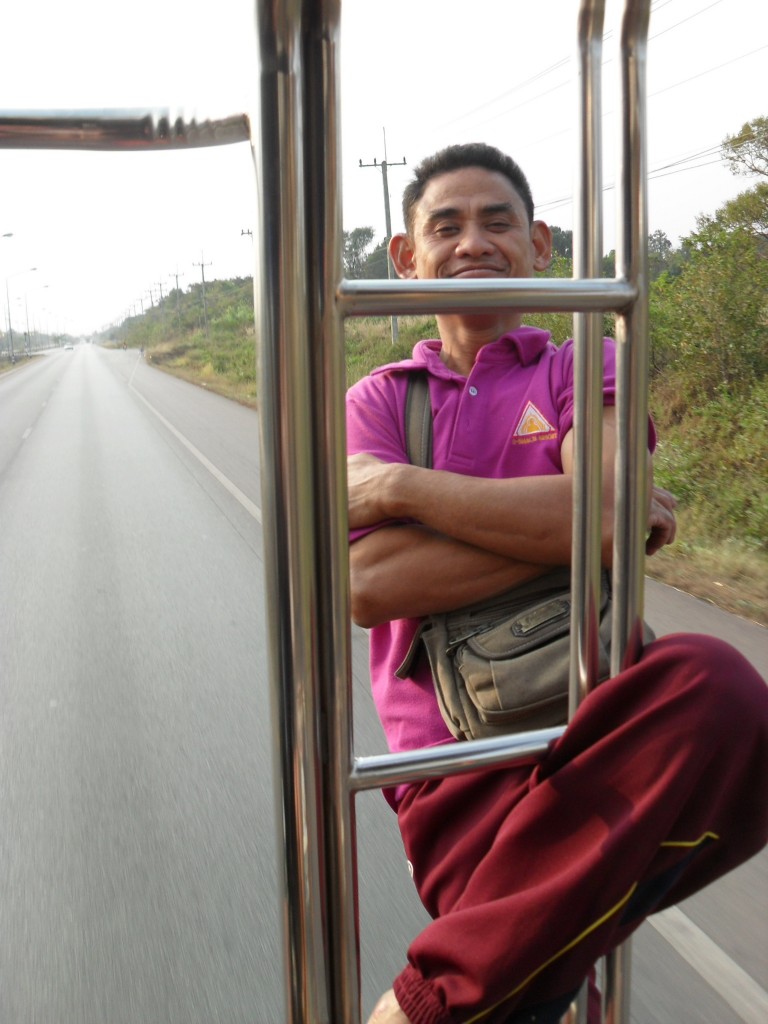 Even on the smoother Udon Thani to Nong Khai highway the packed bus seemed to find every bump and hollow. It brought home to me the past luxury of our rented car and even VIP coach travel. Bai rode every bump and dip like the seasoned traveller he is. One thing which always amazes me on Thai buses is the silence, nobody really talks. Eventually it rubs off on me. Silence is golden but Thai rural buses are much more like bronze for khon jons (poor people). Grunting however is a different matter and the showman in Bai is never far from the surface.

There was a young Thai army recruit sat on the side boarding steps at the rear of the bus, a precarious place to perch. I know because I’d done the same years back. Older and bolder might rhyme but years seem to have distanced them further apart for me at least. Perhaps the ground hurtling a foot or so beneath him was a more welcome sight than the Cambodian border. I couldn’t help but snap a few shots, but Khun Bai wasn’t about to be out done.

The bus raced along at high speed and cool as a village cucumber Bai hung from the rear rail by his legs. Snap, snap, snap. One happy Khun Bai and a very impressed falang.

After passing the huge Udon Thani kilometre marker we hit the country roads for the remaining 45 kilometres of our ride. The bumps got higher and the dips deeper but by now I was back in the old routine.

Time travelled as quickly as the country bus and soon we arrived at Wi’s local town Sang Khom. Another short samlor ride and we were back at our village home. One very happy Wilai and three jubilant tail wagging dogs. Me, I can hack anywhere but now with my chest virus clearing its colour didn’t quite match the rich green country surround.

An afternoon barbecue and a few beers relaxed me whilst Wilai pushed up the water bill by renourishing the garden. A few beers….I walked two of our dogs, Gaan and Cola to the local shop and once again winced at their antics. On the way they gave chase to a chicken and squared up to two dogs at the small shop. On our return they gave a few grazing cows a right runaround and I beat an embarrassed retreat back to the house. Wilai has her hands full with those two.

Ghosts….Our house is full of spirits. Jack Daniels, vodka, whisky, gin and rum but it was the spiritually dead that was to be the concern come evening time.

Over the Christmas period Wilai’s nephew Doy tragically lost his life in a motorbike accident. Doy who was just 18 years old was cremated at the village temple grounds on December 30th, I was there to witness the very sad event. Thai’s have a deep belief that the deceased persons spirit returns to their former ‘ haunts ‘ before their rebirth back into the world.

Since our return to Udon Thani and in our absence Wi’s mother claims Doy’s spirit has visited the house twice during the night. During the afternoon when Wilai was watering her flowers she called me over.

” Hus….band you can smell somebody burn candle. Mark mark. I think Doy come our house now. Hus….band can smell. ” 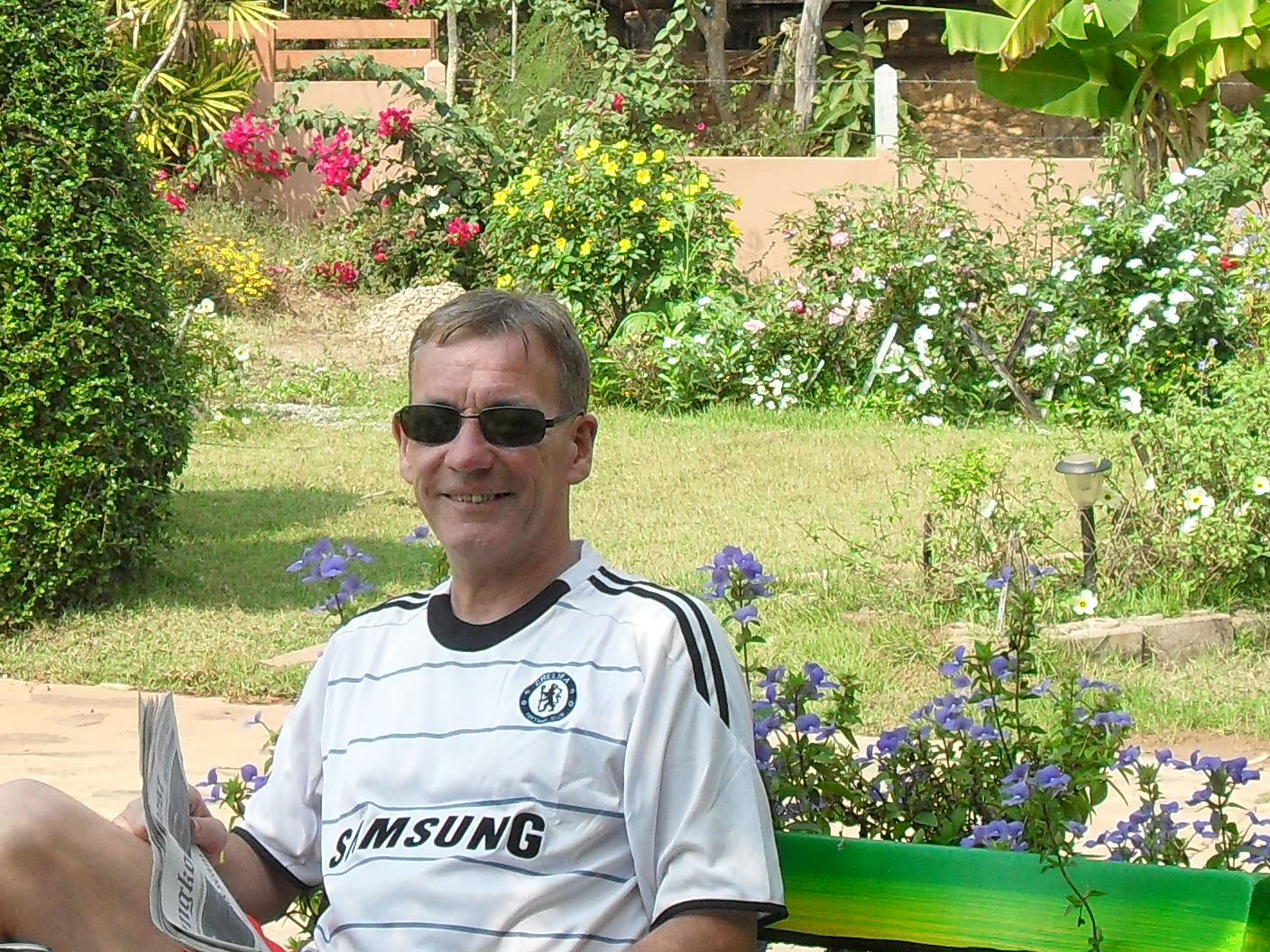 Later that evening I fell asleep on the living room sofa and whilst dozing there was a power cut for a couple of minutes, so Wilai told me. I’m the lightest of light sleepers but Wilai claims she tried to rouse me ten times by calling my name. She eventually woke me with a prod.

” Hus…band, Doy come room. I shout you many times but Doy not want you wake up. I not see but I know Doy come. Hus..band can wake up easy every time.”

Not after the amount of Beer Leo I’d shoved down my neck darling, but another white lie was a far easier ploy.

We left the village around midday because I had preferred to give Khun Bai’s 2-30 pm bus slot a miss, instead we took an earlier ride back to Udon Thani. I just kind of thought Bai might have an even more bizarre balancing trick up his sleeve and one cremation on this holiday was enough for me. Maybe I just didn’t want a future visit in the dead of the night.