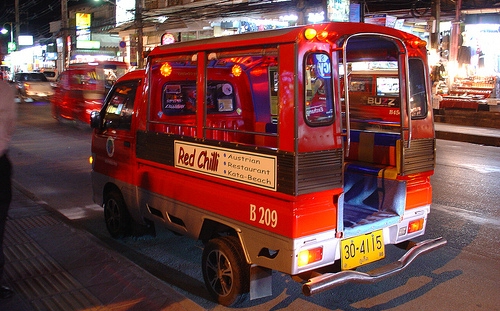 I recently received an email from Thai expat forum site Thaivisa which led me to the holiday island of Phuket. Ivan Anwar, 51, a Canadian who teaches English in Tokyo was on the island with his wife as part of one of their regular holidays to Thailand. Dissatisfied with their hotel the couple decided to move to another one and hired a tuk tuk (taxi) for the exchange. Mr Anwar agreed a price of 150 baht (£2.80) for the ride which turned out to be a lot shorter than he had expected.

On arrival at their new hotel Mr Anwar argued with the driver about the excessively priced fare. The Phuket Gazette takes up the story….

Mr Anwar offered the driver a discounted fare of 100 baht, feeling this was all the trip was worth and got out of the tuk-tuk. At this point, Mr Anwar said the driver telephoned a second man who then arrived on the scene almost immediately.

“The driver then got out of the tuk-tuk and punched me four or five times in the face,” said Mr Anwar.

The second man was reported to have restrained Mr Anwar during the attack. Both men then fled the scene in the tuk-tuk, Mr Anwar said. After witnessing the attack, workers from a nearby hotel took the bloodied Mr Anwar and his wife to Kathu Police Station in the hotel’s mini-bus.

At about 3pm, tuk-tuk driver Tassanarit Damthong, 30, handed himself in at Kathu Police Station. Mr Tassanarit was promptly arrested and charged with assault.

Violence against any fellow human being cannot be condoned, especially in a Buddhist country where it goes totally against the grain. However, I have very little sympathy towards Mr Anwar. The time to argue in any such incident like this one, is before you get into the tuk tuk, and not when you get out.

As with any city in the world, taxi rides can be a complete rip off, but if you have agreed a fare then on completion of your journey you really are obliged to pay. Sorry Mr Anwar, you get no sympathy vote from me, but thanks for giving me a solid introduction to my latest post. 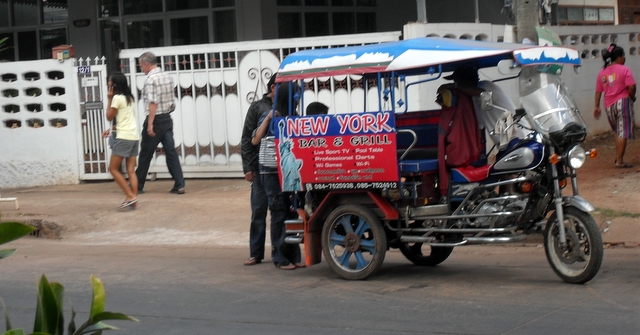 Hiring a car in any of Thailand’s big cities is an obvious advantage if you want to escape the municipality and venture out on day trips to national parks and other attractions. At possibly over 1000 baht a day during peak season periods, renting a car to just tour the city is really an expense which one can really do without. Public and private hire transport are a remedy and a cure for those wanting to stretch their fistful of dollars a bit more.

Udon Thani city doesn’t have tuk tuks, instead it has a mode of taxi service called a samlor or samlaaw (pictured above). The principle is exactly the same as with the tuk tuk and these three seater motorized carriages can be seen just about everywhere in the city. You agree a fare, and on your journey’s end you pay the amount, perhaps with a small tip on top.

A three to four kilometre ride in Udon Thani will cost anything between 60 – 100 baht (£1.20-£2), depending on your skills in negotiation, or if you are travelling with a Thai partner or friend and they can cut a better deal.

The samlors are known to most westerners as skylabs and sometimes if you are in the quieter regions of the city they can be a little harder to find, even more so in the evening. The surest way of locating a samlor if you can’t find one, is to stand at some traffic lights and close your eyes until you hear the sound of screeching brakes, that’s a samlor.

Udon Thani is where the skylab originates and their space tag is thought to have evolved from the vehicle being developed around the same period as when NASA’s more famed version was first launched.

Skylabs are fairly racy, and ideal for finding gaps and weaving amongst slow-moving traffic, but if a more sleepy and leisurely ride is more to your liking then the traditional samlor is more ideal. 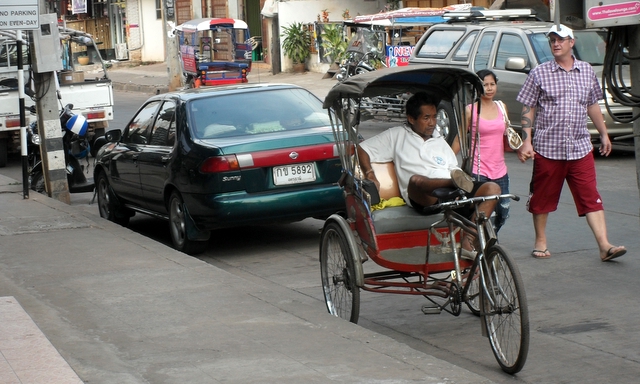 These two-seater cabs are pedal powered and perfect for a gentle paced sightseeing tour. The lung power and leg muscles needed by the riders is impressive, and some of them are not too young of age.

The pedaled samlor is perfect for photographic and video shoots of the city, and is much less bone jarring than the slicker moving skylabs. They are used a lot by older Thai people for trips to and from the markets with the elderly citizens perhaps preferring them as a more traditional means of travel, and their unwillingness to accept the wheels of change. Prices for a skylab and pedal rickshaw are very similar, although after all the effort put in by your rickshaw driver you may feel the need to offer a larger tip. 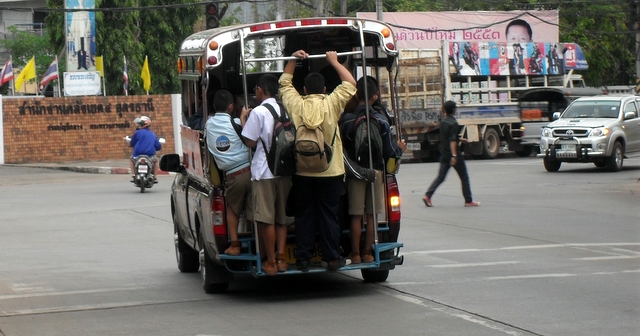 If your budget is running low you can cut costs and jump on a songthaew bus which run many different routes around Udon Thani city. During peak hours, these small buses can get jam-packed and the commuters inside get squeezed in, and those who hop on next find themselves hanging on to the rear rails. If you like to call your space your own, then avoid songthaews late afternoon when the schools close.

Songthaew buses are cheaper than samlors. A similar distance ride in a samlor costing 70 baht would be about 10 baht by songthaew, although as a tourist you’d probably feel obliged to add a tip as well. Travelling around Thailand’s cities and towns really is as cheap as you want it to be because tuk tuks, samlors and songthaews give you lots of options and lots of value for your buck.