They say the older you get, the nuttier you become, and Nutty Park in Udon Thani would seem as good place as any to test the theory. Surely, it had to be full of old nutters. 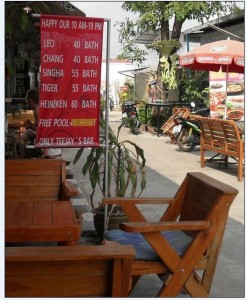 Nutty Park is a gig of 20 or so bars based near to Udon Thani train station and is the nut sat next to the fruit of the Centrepoint Night Market. During daylight, the Park is quiet at best, with most of its punters a little past their prime.

The afternoons I’ve spent at Nutty Park the bars have always been quiet, and the few punters there are mostly old-timers with young Thai women in their company – daytime at the Park is a lot more fruity than nutty – and I decided I needed to check out Nutty Park after dark.

I was a touch apprehensive about going to Nutty Park after dark and didn’t know what to expect. I imagined I might see older men slapping each other with pension books fighting over bar girls. And Diana Ross songs crackling in the background. I also wondered if cortisone injections made elbows squeak, and If a sticky rice and Old Spice combo could strip nasal hair back to its roots. Nutty Park, after dark, had a lot of questions to answer.

Udon Thani’s evening air had a slight chill to it when I set off for the Park, – the cold I had was showing no real signs of abating, so I wrapped myself in a lukewarm hoodie. The samlor (a kind of tuk-tuk) ride to Nutty Park was drafty and glacial, but the thought warmed me that a 50-year-old English hoodie was about to hit Nutty Park that night.

Arriving at Nutty Park, I decided to leave my sardonic and wry thoughts in the back carriage. What the hell I thought, and took one last one with me. On the short walk to the Park, I questioned whether samlor manufacturers deliberately made their brakes screech when they stopped at traffic lights. I decided they did, took a deep breath, and entered Nutty Park. 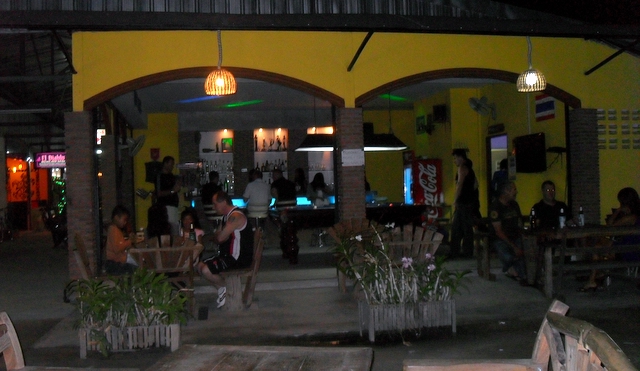 Nutty Park wasn’t exactly bursting at the seams – there were far more people about than during the day, but the loud boom-boom music I expected was playing at low-level mayhem. Either Nutty Park’s bar owners were hanging-out a soft and gentle mood, or there were a lot of super-sensitive hearing aids plugged inside hairy earholes. 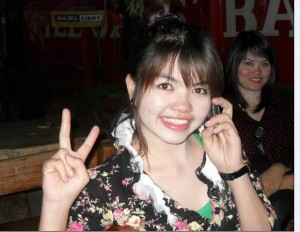 The age groups around the bars varied much more from my lunchtime lark in the Park. There were a few twenty-something men about and a more substantial sprinkling of revellers in their thirties and forties. There was also a fat chunk of old-timers too.

The winners of the ‘Youth Stakes’ were Nutty Park’s Thai bar girls, some of whom were cute, and as always, their cuteness was s-executed with a Thai Two Finger Salute.

Nutty Park has a gaggle of bars, and the Up2You Bar and Black and White Bar were signatures which proved, beyond a reasonable doubt, that William Shakespeare hadn’t been reborn a Buddhist bar owner. Nonetheless, Nutty Park had started to taste good. 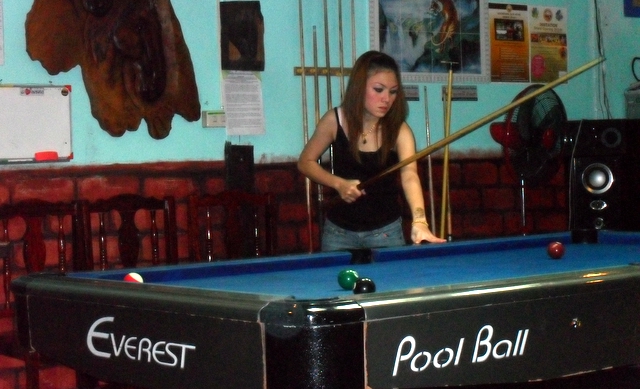 The Up to You Bar made a steady trade in Western and Thai meals for most of the time I was there – much of the food being high-heeled to the adjoining bars. The bar girls also picked at dishes bought just a papaya’s throw away at the Centrepoint night market.

I enjoyed my evening that much at the Park, I had to phone my Thai partner, Wilai, and arrange to meet up later than we’d agreed. It was a pleasant experience – eyeing pretty bar girls, listening to modern music and noting that Old Spice doesn’t deter mosquitoes. I stayed for a few hours enjoying my lark in the Park after dark to the sound of gentle modern music.

Nutty Park left me with the impression the Park was a big boys kind of venue, with a heavy accent on booze and laughter – and the bar girls? Well, zoom, my heart went boom, the Park was like a winter wonderland. There were some pretty Udon Thani bar girls posing the night I was there.

Nutty Park after dark was good fun, the atmosphere was courteous, and I sat back and relaxed without getting harassment from anyone. Perhaps I struck lucky that night.

I was quite impressed with Nutty Park, there were a few western couples dotted about among the mixed-bag of fruit and nut, and the mood around the bars was merry, not loud and boorish – even the bar girls were knowledgeable enough to know who was no-go, and who was available. Thai bar girls also realise you never approach a hoodie – you wait for an invite, and I never gave one.

If you ever find yourself in Udon Thani, then Nutty Park after dark is certainly a place to consider visiting. If you’re old enough, you never know you might enjoy it. I did.

Read all about Udon Thani nightlife.