In two days time (Feb 26) the Supreme Court of Thailand will make judgement on the seized 76 billion baht (US$2.3 billion) of assets belonging to Thaksin Shinawatra and his family. The prosecution allege Thaksin accumulated his wealth by abusing his powers when Prime Minister of the country and Thaksin’s legal team will counter the prosecution with 16 key rebuttals (view Bangkok Post) and the fact the former Thai Rak Thai leader was a very wealthy man before he entered the political scene. A lot more than money is dependant on the outcome of the case, possibly the fragile stability of the country itself.

Thaksin now living in self exile in Dubai after being found guilty of corruption charges has the backing of his loyal band of mainly north and north eastern red shirt supporters. Whichever way Friday’s verdict goes red shirt leaders are hoping up to one million of their followers will  converge on Bangkok next week and force the present government to step down and a new election to take place.

The red shirt rally will also try to force Thaksin’s two year prison sentence to be overturned thus allowing him a safe return to the country. A large part of the red shirt followers are poor rural people who live on as little as 200 US dollars a month, and so why would so many with so little travel hundreds of miles to give their support for a man who has wealth way beyond their wildest dreams irrespective of the Supreme Court’s verdict. Perhaps it’s blind faith, hope and charity. 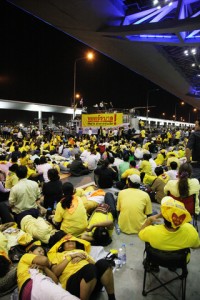 Thaksin Shinawatra is the only Thai prime minister to win back to back elections with the latter victory coming to an end in the 2006 military coup and it was this incident which has made the country’s rural poor feel cheated to this day. The People’s Alliance for Democracy (PAD) siege of Suvarnabhumi International Airport in 2008 (photo right) which eventually led to the fall of the People Power Party (formerly Thai Rak Thai) was the final straw that broke the buffalo’s back.

The country people of Isaan and northern Thailand still hold faith in a third Thaksin government distributing a fairer proportion of the countries spending into the coffers of the rural districts. Do they forget despite Thaksin being Prime Minister of Thailand from 2001 to 2006 the minimum wage in many Thai provinces nowadays is barely over 160 baht per day. Even the red shirts saviour could hardly force the wage scale too far northwards.

The country villagers hopes of a return to Thaksinomics and the carrots which go with it are another reason for boarding the free coaches laid on to ferry the red shirts from Isaan’s cities to Bangkok for what they hope to be an ad hoc last tango in the Big Mango. Cheap interest bank loans to farmers and villages, a 30 baht health scheme and housing for the poor were the key carrots in Thaksin’s pro-poor policies dangled to lure the common peoples vote. The red shirts will be hoping the future brings more of the same.

Free coach rides to the country’s capital and red shirt concert rallies wrapped in propaganda can hardly be described as charity, but they do offer an alternate to the sometime monotony of village life on limited means. A red shirt victory in their fight for democracy will force new elections and a return to cash for votes in Thailand’s villages, most welcome anytime.

Above all Thailand’s northern and north eastern poor who have previously backed Thaksin Shinawatra in two landslide election victories will know a third landslide sweep will force their ‘red leader’ into implementing ‘ Charity Starts at Home ‘ as his government’s major policy. Thaksin himself is too smart not to do so.

Media speculation about Friday’s Supreme Court judgement varies from day to day but the main consensus appears to be Thaksin being given part of his assets back. The return of some money to the former leader of Thailand should be enough to restrain red shirt protests to a calmer level and cap the number of protesters travelling down from the northern regions. The court’s ruling has three possible verdicts, not guilty, guilty and damage limitation.

The world waits with bated breath for Friday’s decision and lets hope it’s one to keep violence and a country’s self destruction out of media headlines.