I’ve Got a Red in the Bed 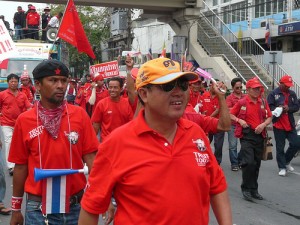 The title refers to Wonderful Wi and is a reference to her growing obsession with the Thai anti-government group the United Front for Democracy against Dictatorship (UDD) or red shirts as they are more commonly known (the image on the right is for reference purpose only).

Last Saturday night the red shirts held a rally at the small town near Wilai’s village and the young one donned her 100 baht red shirt and went along for the evening. I just hoped she didn’t decide to wear a yellow hat with matching handbag and banana coloured shoes like the man in the photo. A girl has to look right on the night, rally or not.

Sang Khom was the venue for the UDD’s latest sally into brainwashing the Isaan public into helping rid them of the Abhisit Vejjajiva led government and to reinstall the master puppeteer Thaksin Shinawatra into office as the leader of the country.

This was a growing army who were equipped with the knowledge that their main weapon was far more lethal than those of their rivals. Red tomatoes are a lot more messy than yellow bananas and far more easier to aim.

After hours of extensive research into Thailand’s political history dating back to its first Prime Minister Phraya Manopakorn Nititada to the present incumbent Abhisit Vejjajiva, I was ready for my interview with Beyond The Mango Juice’s on the spot political reporter Khun Wilai. I wiped the sweat from my brow, grabbed my mobile and rang Wilai at this massive red shirt event.

” Hello Wilai, what is happening at the red shirt rally. It’s very loud, can you hear me.”

” Wilai have they given any indication toward their next political move.”

” Hus…band. Now have lady sing a song, she have nom yai (big breasts). She have big milk”

” Wilai are there any signs of counter protesters, is security high.”

“Big breasts, Wilai did you bring your camera. Get me a close up of the singer.”

I’ll admit it wasn’t an interview which will be inscribed in the worlds political annals forever, but in my defense it was my first attempt. I put down my phone and gently consoled myself with a few Winston Churchill like words.

” Bollocks…. that didn’t go as well as I was hoping it would.”

The UDD rally in Sang Khom on Saturday night was attended by approximately 2,000 locals from the surrounding villages and town. The event had many UDD members giving speeches but the big attendance was solely due to the appearance of Khattiya Sawasdipol, better known as Seh Daeng. Army specialist Major General Khattiya whipped the gathered throng into a frenzy with a speech lasting over one hour before leaving the small town just after midnight. Seh Daeng really had painted the town red. 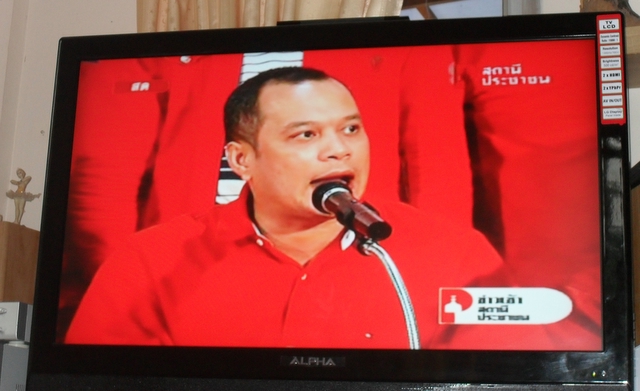 The pro Thaksin UDD supporters now have their own TV stations to satisfy their thirst and wash away the bitter taste the present government has left them with. People Channel TV (above photo) is constantly tuned in at our village house as Wilai and her mama lap up the political speeches, propaganda and red shirt leaders singing ﻿﻿look thung (country) songs.

Power cuts are a part of life in the Isaan villages and if one blacks out the TV then you can always get your red fix from a magazine such as the one pictured on the right. Through TV, magazines and concerts, the red message appears to be getting through. The opinion polls seem to be starting to suggest that too.

The Trojan city of Troy fell to a giant wooden horse with an army inside, could Bangkok’s elite fall to a karaoke machine, red shirt protesters and some of the best country singers in Isaan marching their way down the yellow brick road of Government House.

If they do turn the water cannons on the Isaan mob, let’s hope the big breasted singer is right at the front.