The hottest news story in Thailand during February was the long awaited Supreme Court’s verdict on former Thai Prime Minister Thaksin Shinawatra’s 76 billion baht of frozen assets. The court cut the financial cake much to be as predicted by returning 30 billion baht to the exiled former PM and so keeping all parties concerned making noises of discontent but in reality quite happy. 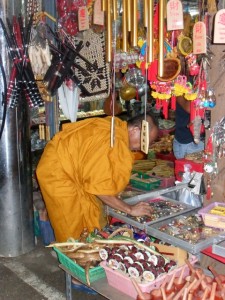 The next big political date in Thailand is March 14th when red shirt pro Thaksin supporters are hoping one million protesters will converge on Bangkok and peacefully voice their displeasure at current Prime Minister Abhisit Vejjajiva and his Democrat Party’s government. The photographs for this month’s review have the theme Thai markets.

The colour of your shirt in Thailand can pinpoint to where your political loyalties lie, but it can also mean many other things. Thailand, Land of Smiles and Keeping Score in Thailand offers a very amusing look at the colour coded factions of Thailand. You’ll be red faced with laughter after reading this highly commented post from American master blogger Talen.

When there’s a King Cobra on the loose most people would head for the safety of their home. Mike from My Thai Friend grabbed his camera from the office and took the reverse route and headed out of the house to try and capture a few pictures of his neighbours efforts in disposing of the six to eight foot long snake. The King Cobra Thailand has a four photo collage of Thailand’s most dangerous and deadly snake tagged to the post. This is another story that attracted a fair share of readers comments.

Jonny Foreigner has a story which you would think is foreign to Thailand itself. The Land of Smiles is known for its relaxed way of life which is largely attributed to the country’s mainly Buddhist beliefs and aggression is not a trait normally associated with its people. However sport has a habit of putting a different perspective on many things. A video of some off the field action in a recent football game between Thai Port and Muang Thong United has scenes of rival supporters clashing in Thai football violence. 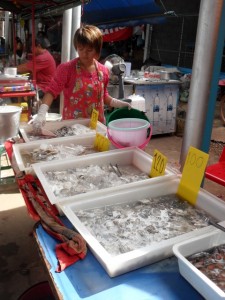 Thai Sex Talk for St Valentine’s Day is an appropriate title for a February review, especially for the romantics amongst you. Women Learning Thai…and some men too reviews author Kaewmala’s much acclaimed book Thai Sex Talk which focuses on expressions used in the Thai language of love. A ‘ dog barking at an airplane ‘ and ‘ lucky mouse falling into a rice bin ‘ are just two of many intriguing phrases contained in the book and explained in detail by blog author Catherine. Dim the lights to a low loving level and learn about Thai Sex Talk.

If you are feeling a little tired and sorry for yourself then read a story about a lady who goes to bed at 2 in the morning and gets up at 5:30, 7 days a week, and never takes a day off. Her work is unpaid as well. A Day Trip With Friends to the Bamboo School from Retired In Thailand and Loving It tells the tale of Kat who runs a clinic and school for under privileged kids in Kanchanaburi Province. Malcolm takes a big bag of brown rice for the kids and also his new friend Jerry for his first visit to the Bamboo School.

Expat Udon Thani Thailand has a long train journey through England’s snow filled pleasant lands to the Royal Thai Embassy in London but not before swapping the cold for warmth with a stay at a travel lodge in the capital. It’s passport renewal time for his family and with his wife and son for company John heads down to London in new Thai biometric passports and escapes the rush at the Thai consul with an early morning visit. If you’re planning a Thai consul trip in the UK then reading this one could save you a lot of time and money.

Siam Rick opens his heart and mind in Make changes and the world changes with you as Rick’s vow to be more open, friendlier and easy-going finally bares fruit. My February pick from Behind the Noodle Curtain compares the insular ways of western people against the warmth and receptiveness of the Thai’s and Rick explains how his transition slowly evolved. 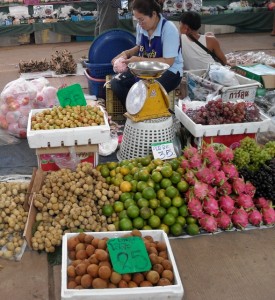 Thai Life in Phana headed north on a 15 hour bus ride for a business meeting in Chiang Mai which left Lawrence longing for his more familiar surroundings of home. However on his last morning he met  Madge Davey an English woman who runs a little charity based in Leeds, England who was visiting Thailand to arrange surgery in Chang Mai for a young Karen girl who has a huge growth on her nose. Karen Girl in Chiang Mai Hospital unfolds the story of KidzinKampz charity worker Madge and toddler Buk Paw.

Ben of The Thai Pirate fame polished his boots and shook the mothballs from his rugby shirt before travelling to Chonburi to gear up for a Rugby game in Pattaya. The Panthers lined up against the Goosers in a game which pitted the middle aged expats experience against a team of young fit Thai’s linked to the British Club association in Bangkok. Would youthful exuberance or old cunning guile win the day.

Camille is on an errand to take his son to visit his wife’s parents on the island of Koh Samui where they all live and he stumbles upon an island ceremony which dates back 50 years or more. Tambun Sala Koy is an interesting post, explaining the ceremony at Plai Laem village which involves placing hair, nails and a man made captain into a small boat to sail away bad luck from the village. Camille’s Samui Info Blog has the story.

Life in rural Thailand and Ubon, then and now looks back at life in Ubon Ratchatani during the Vietnam War through the eyes of an American GI. The post takes the form of a series of emails received by blog author MeMock from ex Vietnam serviceman Rob and offers a fascinating insight to life in Ubon 40 odd years ago. An excellent post.

Finally I would like to make a request to all my fellow bloggers who are included in my Thai blogroll. For future Thai monthly blog reviews I would very much like to include some photographs from your posts in the reviews. If you are happy to grant permission then could you kindly email me at juice@thaisabai.org or drop your approval in the comments box below. Thank you and that wraps up my Thailand Blogs – February 2010 Review. Enjoy.