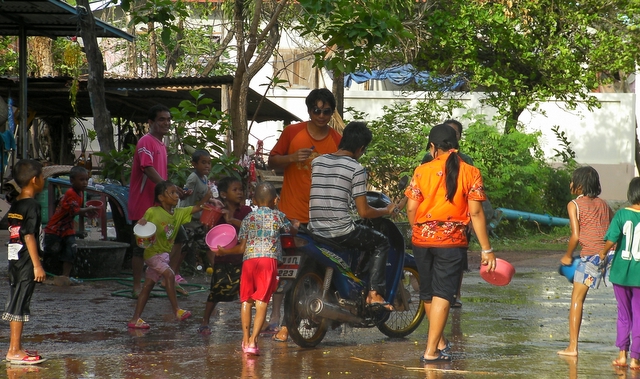 April brings the peak of Thailand’s yearly temperatures and also the cooling water fuelled Songkran Festival (top photo). For those of you living or holidaying in Thailand during the Songkran Festival, Beyond The Mango Juice would like to wish you all an enjoyable and safe period of festivities and if you are driving then please be extra diligent on the roads.

There was only one major story coming out of Thailand in March and that was the red shirt protests in Bangkok. UDD leaders called upon their supporters to rally in the country’s capital and force Thai prime minister Abhisit Vejjajiva to dissolve government. At the time of writing talks between the two opposing groups had broken down and the red shirts were still camped out on the streets of Bangkok with no change in Thailand’s leadership. So far the protests have been relatively trouble free and let us all hope this month sees a satisfactory end to the dispute and a conclusion in Thailand’s best interests.

A new feature for this month’s review is the photographs within the post have all been published with kind permission of the blog authors themselves. Hover your mouse pointer over the photo to reveal its source and left click to enlarge. The photographic theme is Thai women. 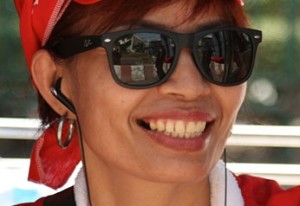 If you wish to see the faces behind the red shirts rally in Bangkok then Women Learning Thai…and some men too has some outstanding photographs on view. Catherine is a keen photographer and she swaps Thai language tips for the atmosphere of the red shirts rally and hits Bangkok’s streets to capture the determined but happy mood of the protesters in The Red Shirts in Bangkok : The Faces of Day Four. The photo right is just one of many superb shots posted on this one.

If you’re wondering where you might possibly meet such a beautiful Thai woman as the one on the right then Jonny Foreigner and Revealed : Where to meet Thai women might hold the answer. Jon gives his opinion on language, wealth and education in his guide to finding your perfect Thai partner. I’m expecting this one to be a highly commented blog post.

Trip to Laos part III from Life in rural Thailand hits the road early on the journey from the southern Laos city of Pakse to Tha Khaek. A 200 baht police fine and a search for grilled rat on a stick are a part of blog author MeMock’s trip to Tha Khaek. MeMock is a regular visitor to Laos and this post along with many of his other recollections of the country provide a good insight to anyone wishing to visit the Lao People’s Democratic Republic. 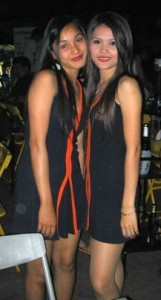 Siam Rick and Behind the Noodle Curtain came to the conclusion  Canadian boys need to toughen up. Rick touches on the pitfalls which many first time visitors fall into when it comes to the lure of Thai women they meet in the bars and shopping malls of Thailand. The post includes a couple of horror stories that happened to two of his fellow Canadian nationals. A recommended view for anyone about to embark on their first trip to Thailand.

Thai’s place a lot of faith in the mystic and spiritual side of life and a trip to a fortune teller by Mike and his partner Duen reveals the culprit behind a burglary in Samut Sakhon. Mike of My Thai Friend is highly sceptical but Duen is not when a Thai monk reveals the identity of the person behind the crime in Monks as Fortune Tellers. The monk also discloses to Duen some startling information about Mike.

If you’ve finally met your perfect Thai partner and have to leave her thousands of miles back in her homeland, keeping in touch can be expensive. For all those lonely souls who are racking up huge phone bills calling their loved one in Thailand, expat Udon Thani reviews possibly the least expensive route. In call thailand and udon thani cheap,  John reviews rebtel.com and his evidence points to the phone service having very low tariffs.

If you are considering hiring a car whilst visiting Thailand then you may be best advised to park up at Camille’s Samui Info blog first. Amongst many others…A frequently used method of warning road users of a breakdown in the road ahead is to cover the road with tree branches….is just one of many tips and facts for motorists planning a journey on Thailand’s roads in Driving in Thailand. The coming busy Songkran period makes this a must view post for those who are inexperienced drivers on Thailand’s roads. 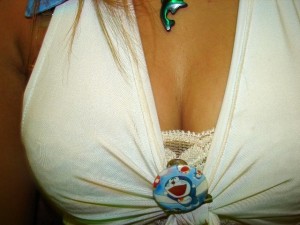 They say big is best but when it comes to ladies not all of us would agree. Breast enlargement in Thailand is big business and many petite Thai woman long for the alluring charms of their bustier western counterparts. Thai Women & the Issan Silicone Farm looks at Thai women’s fascination with big breasts and one man’s efforts to put off his partner’s wish for bigger boobs until another day. Read this post and you may well be thanking Thailand, Land of Smiles for the mammary.

If Kanchanaburi ever gives out awards for tourism promotion to its province then Malcolm and Ciejay best start preparing their speeches for the ceremony now. My Friend Jerry’s Trip to Erawan Waterfall is a collection of photographs and script highlighting one of Kanchanaburi’s top tourist attractions and a place I have been lucky enough to have visited myself. Retired In Thailand and Loving It once again serves up the delights of Kanchanaburi on a photographic dish. Great photos and wonderful memories.

I travelled to Thailand for many years before I discovered the natural ways of the Thai people. The country is heavily focused towards its Buddhist religion and Thai Life in Phana is a blog which devotes much of its posts to explaining many of the rituals and ceremonies of Buddhism…..The Boun Pravet festival is concerned with re-telling the story of the penultimate life of the Buddha…..Boun Pravet: Procession to the Wat tells the story of Buddha-to-be Prince Vessandorn’s return to his father’s home after being banished into exile for giving away a white elephant which is regarded in Thai folklore as a symbol of rain. Lawrence’s photographic enriched post follows a procession from Don Chao Poo Forest to a temple in Phana.

For younger readers who have a wish for sand between their toes and loud music in their ears I recommend visiting my jungle life. 5 Rules for Surviving Full Moon Madness has all the tips for survival at Thailand’s full moon beach parties. Jungle Girl offers advice on pickpockets, drinks and what not to take to the Land of Smiles maddest venue. Get your own personal Full Moon insurance by checking out this one.

With the prospect of paying between 2000 – 3000 baht (£40 -£60) for a meal at a plush Bangkok hotel, Ben of The Thai Pirate heads out onto the streets for a polystyrene container takeaway at 30 baht a throw. Bangkok’s Rama 4 may have two extremes of cuisine but for Ben fried sweet bananas, sticky rice and hot spicy noodle dishes won the day. Chula Street Food at Night gives the verdict on Thailand’s famous street food.

That is it from this month’s Thailand blogs review and I’m sure you’ll agree there are some great quality posts and photographs selected for the month of March. Enjoy Songkran and once again drive carefully if you’re journeying during the festivities.