Village Life – Holding Back the Years 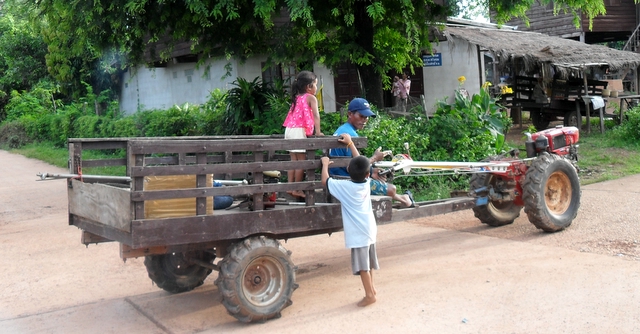 I wonder how many years ago this type of transport was used in the country hamlets of England. Quite a few would be my guess. In Wonderful Wi’s village in Udon Thani this type of transport is mainly used for work but it’s not uncommon to see a family travelling this way on a trip to their local town or neighbouring  village. At times I have to pinch myself to realize I haven’t stepped out of a time tunnel into a land a long time back. Life in a Thai village is not quite Bedrock and the Flintstones, but definitely a village holding back the years.

H-tech mobile phones might ring constantly and brand new karaoke machines beat out their rhythms to knee-high voices, teenagers and drunkard herds, but it’s some of the other things which make me think this village is one that’s never stepped from the shadow of the past. 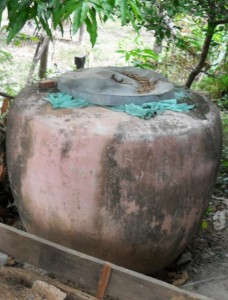 When your kitchen tap only runs with cold water you get the feeling you’ve stepped off the sidewalk of life’s easy street and hit the cobbled stones of its old town – the village tap water is not fit to swallow and the water most villagers drink has its own Thai season named after it. The dark, heavy clouds of Thailand’s rainy season provide drinking water for most Thai village folk.

Village families collect rainwater in large earthen jars (photo right), and plastic bottles and assorted containers are filled from it. It’s rare the village shop (our one) has bottled drinking water but according to the International Bottled Water Association (IBWA) Thailand guzzles it by the gallon.

A report by the IBWA in 2008 placed Thailand in the top twenty rankings of per capita bottled water consumption by the worlds leading countries. Thailand was ranked 13th, and surprisingly, the only Asian country in the top 20, with 118 litres of consumption per person each year. Mexico (268 litres), Italy (245) and the United Arab Emirates (180) were the top three in the table. Germany ranked 5th, France 6th, USA 10th and Bulgaria 20th with a per capita of 105 litres. China had the third largest market but a lowly per capita consumption rate of just 17 litres.

However, I would strongly suggest Thai villagers annual bottled water intake is considerably less than the country’s average. Rainwater is a free resource which has nurtured rural rice crops and quenched workers thirst for centuries, and clever marketing campaigns from the big water companies isn’t going to change the village persons reasoning. That’s enough about water, let’s get back to Bedrock. 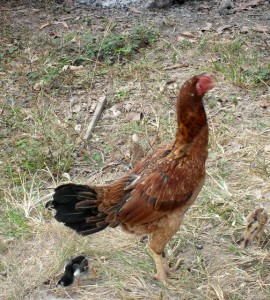 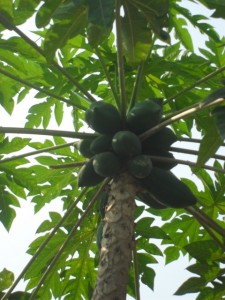 Living off the land and livestock is not alien to developed western countries even today, but its advocates are becoming thinner on the ground – unlike 50 years ago when the practice was as common as village muck. In contrast, Thailand’s villages are alive each and everyday to the sound of chickens clucking and the gentle thud of papaya fruit hitting the ground.

In Wilai’s village there are very few in-house kitchens with almost all cooking done outside – early evening the smell of spices and meats mingle together all around – the distinctive smells of the different spices and vegetables waft through the evening air from simmering woks and pots heated on charcoal fires and bottle-feed gas rings. The meats are a little more difficult to tell apart.

Most types of hunting are now banned here in the UK, even fisherman are lucky to get a chance to eat their tall tales. Thailand is a different kettle of fish altogether. The country’s rivers are cast for their seemingly never-ending supply of white meat and frogs, snakes, rats and birds are game too – the killer weapon sometimes being just a catapult. 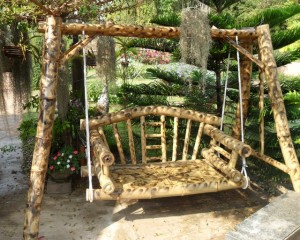 Regular power cuts in Wilai’s village take my thoughts back to the UK in the 1980’s when the coal miners strikes hit the country’s power resources. Thai’s take the regular blackouts with a shrug and a smile. Life rolls on and the years roll back.

The UK has lost much of its skilled workforce to modern computerized industrial machinery which has stripped the nation bare in the basic skills of survival – skilled workers replaced by high-tech machines, and crafts like basket weaving, moulding and wood carving have been lost to many, and jealously guarded by those few who practice them but only teach their trade to a hand-picked few.The photographs (above) are examples of the fine craftsmanship which is still very much alive in villages throughout Thailand.

Weavers, furniture makers and all way of building trades are a few of the crafts which every village has among its people. A good village tradesman can lay a floor as level as any higher paid city contractor – he just might work a little slower. .

Entertainment in rural villages and small local district towns are another throwback to my own younger days. Travelling mobile cinemas park up a few times a year – mainly during big Buddha festivals, and a travelling fair’s number one attraction is usually an ageing Ferris wheel that looks like it’s had its sell-by-date recycled more than once. I remember those back in the 60’s in England.

If the villagers haven’t got their own stock of food there’s always trucks topped full with fruit and vegetables passing through each day as well as pedlars selling fish, meat, and everything from tiger balm to sandals. Sometimes a local man returns with his afternoon catch of small tiny fish and will sell a good handful for a few baht.

Slowly but surely modern brick houses are replacing older creaking wood-stilted homes in Wilai’s village but for most the change is many years away – even the karaoke machines blast more to the sounds of Isaan’s luk thung country music than the popular music of today.

The much used jargon, ‘out with the old and in with the new ‘ doesn’t really stand up in Wilai’s village,  ‘if it isn’t broke, don’t fix it ‘ certainly does. Thai village life is a throwback to years gone by but it’s a real sweet way of life and a refreshing break from the big city concrete jungle.