Durian Durian and a Boy Band 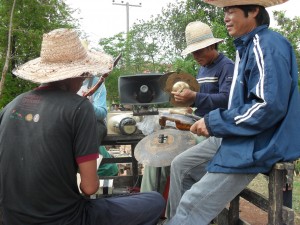 Saturday is my favourite day of the week no matter what part of the world I’m in. It was mid afternoon and I was led on the living room sofa, five large bottles of Beer Leo were chilling in the fridge. Bliss in a village I’m going to miss in a few days time. England and work are calling.

My senses were alerted to loud music in the distance. It was getting louder. It became deafening and appeared to stop outside our front gate. I got up to investigate, camera as always in hand.

The village Bang Fai Rocket Festival was taking place the next day (Sunday) and outside our house were four musicians sat in the back of a motor driven cart. They were playing music in disharmony to Isaan country songs booming out from a loud speaker attached to the back of the cart. A small entourage followed them armed with a money tree and a siver donation bowl. They were touring the village to collect money to help fund the Bang Fai event. They were stopping in every soi (street) to collect donations and hope each household would offer them beer and whisky for their efforts. They sounded awful and looked even worse. The village households had so far been liquid kind. 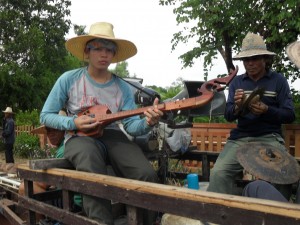 For an all boy band three of the quartet had seen much younger days. They were more vinyl than Dvd. The fourth group member was by far the youngest and sat quietly strumming on an old style country guitar. He must have been thinking if they ever did make it big time then most of the song royalties would be spent on heavy duty make up and collagen. One band member tapped away on a cymbal with an empty Beer Chang bottle (top photo).  Keith Moon, a budding Buddy Holly and two goons. They were more Durian Durian (smelly Thai fruit) than Duran Duran.

Behind me in our garden three of our dogs formed a rival band of their own and sang along in tune with the out of tune music. In one ear I had an all boy band with zero X Factor and in the other, three dogs making one ‘L’ of a noise. I could feel a XL headache coming on. I headed back to the house and waited for the entourage to attack. I didn’t have to wait long.

The money tree man came first. He kind of slided and glided down our driveway with a sort of Michael Jackson-esque lao khao (rice whisky) fuelled moonwalk. Wilai whispered to me.

” Hus…band not give man any dink (drink), he dunk (drunk) awnready (already).”

I pinned a hundred baht note onto the money tree and matched him smile for smile. I offered no drink and he soon left. Bubbles and his silver bowl arrived shortly after. The ‘monkey’ was a little worse for wear. He’d slipped from being top banana.

Our driveway is about 30 metres long, and the slow speed Bubbles was negotiating it I pondered whether to grab my English – Thai dictionary and translate a formal English gentlemans greeting. Something along the lines of this.

“Here’s some money. Now bugger off. You’re scaring the shit out of my dogs.”

I decided I didn’t have enough time and bugger wasn’t in my book. Strange that. It’s used a lot in Pattaya.

With outstretched arms Bubbles offered the silver bowl. When I was at school I used to like multiple choice questions, the answers were normally so easy. I checked my wallet, there was five 1,000 baht notes, one 500 baht bill and two twenties. Multiple choice is easy. I placed the money in the bowl and Bubbles withdrew his arms. He then went into a long speech in a Thai – Laos dialect. It was beyond my mango juice.

I once again matched a smile for a smile, embarrassingly for me his teeth were so much whiter than mine. Bubbles then departed our garden, covering both sides of the driveway. He actually shut the gate behind him. Amazing Isaan. 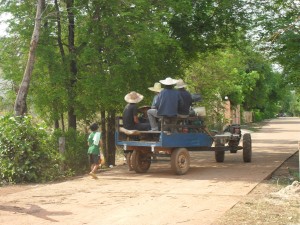 I went straight to the fridge, cracked open a Leo and settled down on the sofa once again. For a few minutes I wondered as to what Bubble’s strange Thai – Laos tongue had said. I came up with two answers. Multiple choice again.

I hoped for the former but feared the latter was true.

The music grew quieter and my mood lightened once more. Saturdays are my favorite day of the week and in an Isaan village where the sun beats even louder than any music I love them more. Thank you Durian Durian for clearing my ears of wax and making my forthcoming descent to London a much more comfortable one. Chok dee krap.