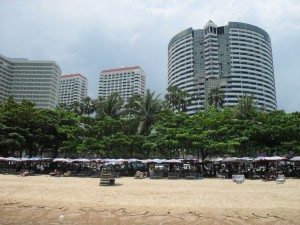 I don’t know whether it was the pure hard sales pitch or the mention of Tina Turner’s classic song ‘Simply the Best’ that made me buy it. I was in Abu Dhabi International Airport duty free and had a litre of regular Jack Daniel in my hand. She made her move.

‘Sir you really should try Jack Daniel’s Silver Select, it’s the top of the range Tennessee whisky’
‘No, I’ll stick with the regular,’ I replied
‘Sir, believe me Silver Select is the top brand. It’s simply the best.’

Perhaps I’ve developed a soft spot for ageing American rock singers. I bought it and I’ll pick up again on JD’s Siver Select later in the story. 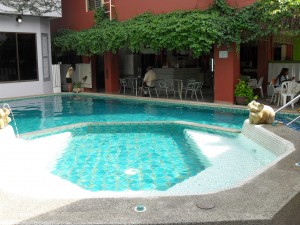 My flight landed at seven in the morning at Suvarnabhumi and just two hours later myself and Wonderful Wi had checked into our hotel on Soi Buakhaow, Pattaya. I’d been warned by many people that Thailand was very very hot for this time of year. I think they were being gentle with me, the heat was near unbearable. Even macho Australians were bleating about the weather. Perhaps the Sheila’s drink the tequila in Adelaide.

Escaping Thailand’s oppressive summer time heat and suffocating humidity is near impossible bar locking yourself in an air con room 24/7. Even hitting the streets of Pattaya after midnight leaves you with a sheen of sweat within minutes, though I still prefer this sweltering climate to England’s much colder ways.

Pattaya was just that, Pattaya. Nothing much ever changes. It was just another year older. A few of the bars had been renamed and the smaller lock up units were as always being ripped out and refitted as someone new chased their own version of a foolish dream.

Pattaya’s people never change much either. The phompoi (fat) lady was still selling slimming aids to young lean bar girls, and there was still a Thailand newbie in every soi who thought he knew more than any ex pat. I just hoped Khun Phompoi didn’t move to Abu Dhabi, I’d have to get a bigger flight bag.

Our four days in Pattaya took in a couple of visits to Jomtien Beach (top photo), Mini Siam and Pattaya’s Floating Market (excellent). It was all good clean fun in a sin city which Sim City would struggle to simulate. Sheila’s drinking Coca Cola as an ageing Englishman fought another Tiger Beer. Pattaya was Pattaya. 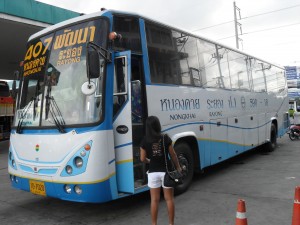 On day five we endured a long ten hour coach journey from Pattaya to Udon Thani, the bus only stopping to allow time to stretch your legs or whatever just once. I had three cigarettes and no alcohol in all that time. It was a mobile detox unit at 500 baht a time. Cheap. I stepped on the bus aged 50 and disembarked 45. Sweet.

Our choice of overnight accommodation in Udon Thani was fully booked so we checked into a lower standard place just down the road. It was a kind of love motel and Wilai wasn’t over impressed but it was my sort of joint. The air was thick with cheap perfume and alcohol, and there were plenty of cans being kicked loudly.

The next morning we rented a car and mid afternoon headed out to the village. About 10 kilometres from our village home we hit a wall of rain, a real heavy storm and by the time we’d reached our house the village electric supply had been knocked out by the downpour. The power didn’t come back until late in the evening. Typical, we’d just done a big shop at Tesco Lotus and what was already thawing, thawed. It went into the warm freezer with fingers crossed. 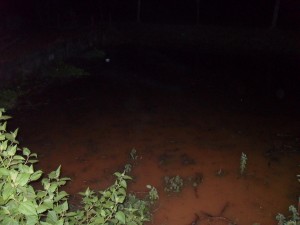 Late afternoon I cracked open my Jack Daniel’s Siver Select and set about seeing if it was up to much. It tasted a little bit different but regular Jack seemed to have more of a kick. I always drink JD alongside Beer Leo when I stay in the village and I was starting to feel a little disappointed with it. It was eight in the evening, the house was boiling hot and lit by a couple of candles. The village was in total darkness. We were all praying for the power to come back on. Jack, Leo Jack, Leo.

When it comes to nightfall in a Thai village then I’m very wary of stepping out of the house. I’m petrified of snakes. Even the normally placid soi dogs growl at me come darkness. I ventured out into the garden for a cigarette. The village was completely blacked out bar a few flashing lights over the road from our front gate. I decided to investigate.

They were four village locals with torches strapped to their heads searching for frogs in a rain made pond in the overgrown land opposite our home. I rushed back to the house grabbed my camera and waded in. Here’s the best photo I got and boy does that Silver Select have one hell of a kick. I might buy a bigger flight bag for my next trip.