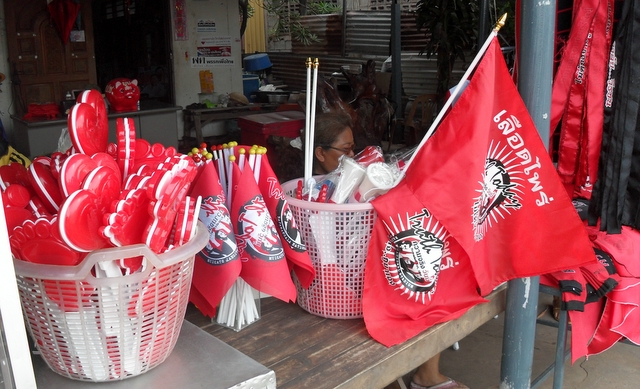 I am not a politically motivated person and I hope I never will be. However I do exercise my right to vote here in the UK but if my colour doesn’t come in then I’m not going to cry over the increased cost of my spilt milk. At my working class level in life my cigarettes, alcohol and utility bills increase each year no matter which political party is running the country.

When it comes to Thailand my knowledge of their political system and each parties policies is basic at best. I have no affiliation to the reds or yellows and no overriding preference for a ruling Democrat government or for a Peau Thai election victory. No strong preference but nonetheless I have an opinion which is perhaps influenced by the amount of time I have spent over the past six and a half years in the ‘red’ half of Thailand, Isaan. 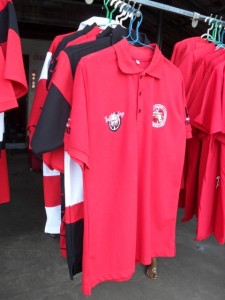 Udon Thani Province is one of the red shirts major strongholds in Isaan and it is where Wonderful Wi and I decided to build our village home five years ago. Wi is like the vast majority of Isaan people in that she is a believer in the red shirt (UDD) cause which calls for the dissolving of parliament so that a general re-election can be held.

Wilai had hoped this could be reached by peaceful means and in no way approved of the hard core tactics which left Bangkok with numerous deaths and massive destruction. Wilai has also never participated in any of the UDD rallies and previous to Thailand pulling the plug got her daily red propaganda fix from the satellite People Channel TV.

During my recent two week stay in Udon Thani I had a chance on two separate occasions to take a closer look at the red shirt propaganda machine rolling out its merchandise and doctrine at close hand. The civilian journalist in me thought it too good a chance to miss.

One day we were making our way through the heavy city traffic towards the Napalais Hotel for an afternoon swim when Wilai pulled the car over to the side of the road and hit the brakes. There in front of us was a typical Thai business set up, a house with a store and its goods at the front. It was a red shirt merchandise shop. I’d always wanted to hear what level of decibels those clapping feet (top photo) reached. This was my chance. 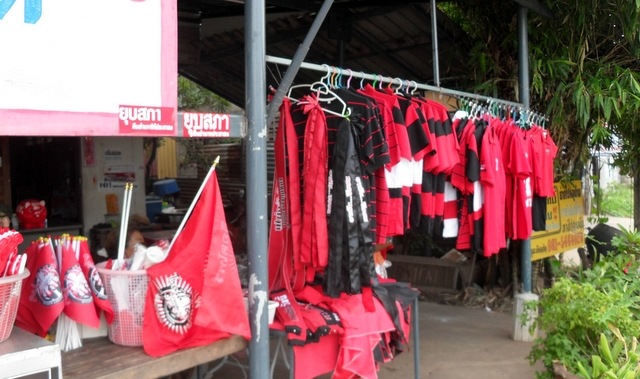 There was a wide range of goods on sale and at very reasonable prices. I just had to buy some of those red and white plastic clapping feet. For Wilai of course. At 30 baht they were a noisy steal and there was a choice between red feet and red hearts, the romantic in me bought the feet. Romantic…I’m sure Wilai loves seeing my shoes stood at an ATM machine.

If your favourite colour is red then forget Jaeger and Laura Ashley this was the place to shop. There were Polo shirts, t-shirts, headscarves, ribbons, open toe sandals, flags and of course clapping feet. I was surprised not to see any Simply Red CD’s. It was probably all a little bit expensive for a rural red shirt but for the wealthier city dwellers kitting yourself out in UDD red was probably fair on the pocket. Here’s a breakdown on some of the prices.

The shop owners didn’t show any sign of surprise by a westerner visiting their store and it did make me wonder if there had been a few other falang before me. They also sold a few food snacks and for 30 baht I bought some delicious Isaan style fried mince pork and onion which I later reheated at our village home. ‘Red faced’ I paid a paltry 60 baht for my goodies and we promptly left.

A week or so later we were driving into Udon Thani city to book into a hotel for the last three days of my stay in Thailand and Wilai caught some news on the local radio station. Udon Thani’s UDD red shirts had set up a base camp on the outskirts of the city and as we were heading that way we decided to check it out. Civilian journalism covers many things.

We turned off one of the main highways leading into Udon and after negotiating a couple of narrow winding roads we arrived at the camp. Periodically along the roads were small piles of tyres. I wondered if some kind of Isaan style hula hoop contest was due.

The camp was near deserted and the spacious piece of land housed a large (not giant) TV screen and piles of stacked up plastic chairs. There was also a couple of stalls selling food snacks and soft drinks. The camp was gearing up for a nightime live TV link from Ratchaprasong and would be far busier later on. With no beer on show my interest went as soft as the tyres baking in the hot afternoon sun. We decided to return evening time.

We arrived at the camp around 8 pm after passing through a security check near to the site. Security check, they just smiled and waved us through. There was a fairly large crowd seated before the TV screen and I guessed the hula hoop contest would start very soon. 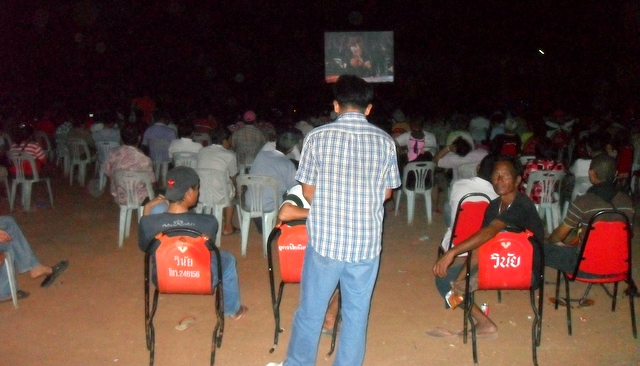 We stayed at the camp for just over half an hour and I spent the whole time watching the red shirt supporters viewing the live TV link from Ratchaprasong. There was about 200 people seated with a steady trickle of new people arriving all the time. No one appeared to be leaving. Obviously and embarrassingly it was only me who needed a drink.

The red shirts gave me a few friendly stares and smiles but basically they were too interested in the live TV link to concern themselves with a westerner flashing his camera every now and then. There was the occasional muted sound of red clapping feet from a few people at the front which made me wish I’d brought along Wilai’s and joined in. That would have brought a round of bright white teeth and given the camp some much needed light to the dark arena.

As we left the camp and drove back up to the highway there was plenty of cars and trucks heading the other way. The hula hoop contest must be due any minute I said to myself as we headed to the Centrepoint Night Market and for me a much needed drink. Journalism is real thirsty work.