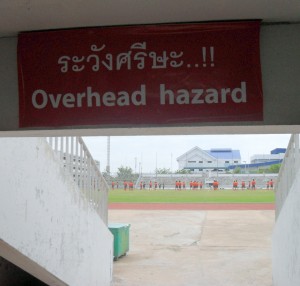 For one brief moment I forgot where I was, somehow I imagined I was dressed in the UDD’s red shirt colours and about to run out onto Liverpool FC’s famous Anfield turf. I glanced up at the sign above the tunnelled entrance to the pitch, did it say ‘This is Anfield’ or ‘Overhead Hazard’, luckily my senses kicked in, my vision cleared and my memory came flooding back.

I was at the home of Udon Thani football club inside the grounds of the Institute Of Physical Education situated just a hop, skip and jump from the city’s domestic airport. Did the sign mean to duck my head, or was it a reminder to the players about their high upfield punts causing damage to low flying aircraft.

Beyond the Mango Juice dons baggy shorts and a couple of big balls as it realises a dream it has harboured for a long time, and finally gets its chance to plant its size eight feet onto the hallowed turf of Udon Thani football club. Despite myself looking messier than Messi and more loony than Rooney, the staff at the Institute Of Physical Education made me feel most welcome. The story starts a few months back.

I always lay down a loose plan for my Thailand holidays, and my recent trip in May was no different. After discussions with Wonderful Wi back in March, we had finalised our itinerary for my 19-day stay. We’d stay four nights in Pattaya and also have ten days at our village home in Udon Thani. The remaining days would be allotted as, when, and so.

There was one day, May 8th, which I had earmarked to go and watch Udon Thani FC play top of the table Buriram in their Regional Division 2 North East League football match. I had two minor problems, I didn’t know where the football stadium was, and I hadn’t told Wilai we were going. On the morning of the match, I put it to her.

“Wilai, today I want us to go and see Udon Thani play football.”

A noise like a deranged wailing banshee emanated from her mouth in response.

I’m not sure if it is an actual Thai word and my spelling might not be correct, it could be a word from a regional dialect. Roughly translated into English, it means…..”Over my dead body John”. She then added.

She had blown the final whistle; the game was up. Defeated and red carded I withdrew to the garden to inhale smoke through an outstretched bottom lip. I would now have to be content with trying to track down Udon Thani’s stadium and buying their football shirt the next time we stayed in the city. I’m not sure Wayne Rooney would have taken the news as well as I did. 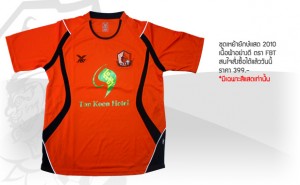 Ten days or so later we were staying on the eleventh floor of the Napalai Hotel in Udon Thani, and from that high ground, I spotted floodlights and the whereabouts of the city’s football stadium. Within one hour Wilai and I were at the Institute Of Physical Education Udon Thani Stadium.

My efforts to locate the team’s club shop met with shrugs, apologies and polite suggestions from the institute’s officials. The club’s website advertised first team shirts for sale at the club shop for 399 baht (photo right), no one here knew anything about them.

One of the officials then led me inside the stadium where we stopped at the players’ tunnel (centre of stand below). By now Wilai had returned to our car, Thais get embarrassed about asking the where, when and whys of most things but I was determined to track down my shirt.

The official pointed outwards to the green playing surface where orange shirted players and coaches were going through their training routine. He politely suggested I ask one of the football staff about the whereabouts of the club shop. He then turned around and left. That was when my mind drifted off to Anfield. Chest puffed out I led my imaginary team out of the tunnel and on to the hallowed turf.

The pitch did look rough, and I nearly broke a metatarsal bone just looking at it. It had more lumps than your mother-in-law’s gravy. This was grass-roots football cut bare, and I decided not to ask about the non-existent club shop. In truth, I’d feel a little embarrassed; maybe I was turning Thai. Instead, I settled for taking a few photos of the training session and stadium. 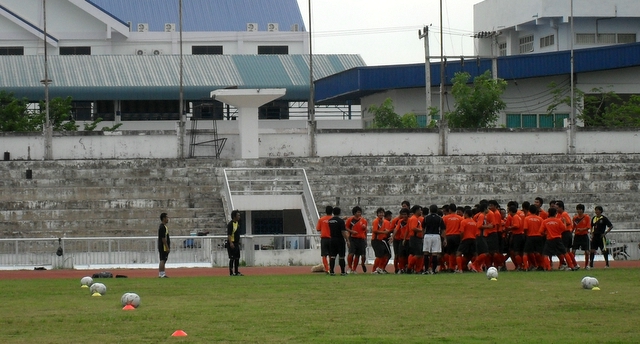 Udon Thani FC are currently lying in 13th place (June 26th) in the Regional Division 2 North East League. With the season at the halfway point, there are only three teams below them in the league table, although a recent 1-0 win over local rivals Nong Khai will have lifted club spirits.

The team have only scored 13 goals in their 15 matches, and the club manager must be considering whether buying a heavy roller, and a sack of grass seed would be more valuable than a proven goal-scoring striker. Playing decent football on the surface of their pitch must be very difficult indeed. After 20 minutes of watching the players train, I shimmied and dummied my way back to the tunnel. But my hunt for an Udon Thani football shirt wasn’t over. 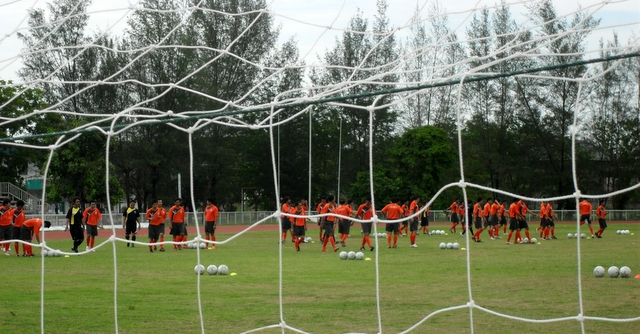 I did finally buy a football shirt of the team nicknamed the Northeast Giants at a sports shop near Udon Thani bus station. The price was 399 baht as advertised on the club’s website. The shop owner slipped up there because I was expecting to pay at least 500 baht. A tiny victory for me, although winning isn’t everything.