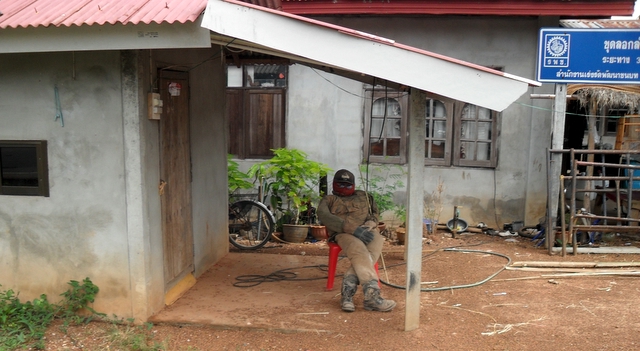 If you’ve ever watched a full evenings worth of Thai TV then you will surely have come across what is in my opinion typical Thai humour. Slapstick comedy. It can appear on screen at anytime but late at night Thai TV is normally guaranteed to air at least one show. Cue the straight man and bring on the ladyboy because that’s Thai humour in full swing.

I guess I’m a little biased about generalizing Thais sense of humour as being slapstick. As a kid I laughed out loud at Laurel and Hardy, Norman Wisdom and my favourite film star Jerry Lewis. Thai people have many different kinds of humour but perhaps I just happen to notice the slapstick variety most of all.

On a recent trip to Udon Thani with Wonderful Wi, I came across a little slice of Thai humour. That’s not quite the truth, because it was Wi who noticed it first. It wasn’t slapstick, although just like that brand of comedy it was very visual humour. It had wry and dry written all over it. Visual humour is a multi national thing.

We were driving from our village home to Udon Thani and had just passed through a small town named Phen when we stopped at a crossroad’s traffic lights. Those things confuse me, I’m never sure if they’re working or not, then again I’m not the driver. Normally we go straight ahead but this time Wilai took a right and we headed along the alternative route.

We were driving through a village about five kilometres from Phen and as we were about to leave it behind, Wi slowed down and hit the brakes stopping just past the village security hut (top photo). She glanced back then turned around and spoke. 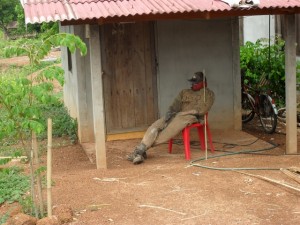 ” Hus…band, I think I see something for your dia…ree (blog). I want you take picture security man sleep. I think you like.”

I got out the car and edged a little nervously towards the security man sleeping outside his box. I could see his bicycle against the side wall and assumed a lengthy ride to work had tired him out.

Work is probably the wrong word because these guys are always locals who do voluntary shifts on a rota basis. That’s why nine times out of ten the boxes are unmanned. Who wants to work for free.

There was a village style restaurant just over the road and the handful of customers were watching my every move. I guessed they were thinking what the hell is this crazy westerner up to. They weren’t thinking that at all because they knew something I didn’t.

I edged a little closer, closer still. I could hear stifled laughter coming from the restaurant. The security guard sure was tired, he didn’t move a muscle. Maybe he’d been on the lao khao (rice whisky) because he looked really stuffed. That was when it hit me and the laughter got louder and louder. I just had to join in even though I was as red faced as the ‘security guard’. 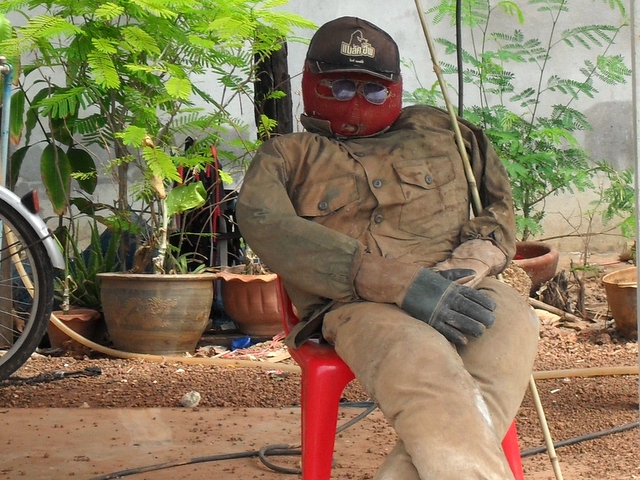 Thai humour is a wonderful thing. I was taking pictures of a bloody straw man.